These are stories Report on Business is following Thursday, Jan. 15, 2015.

"The SNB had become more active in enforcing its floor … however, a complete and sudden abandonment is a shock," said chief currency strategist Camilla Sutton of Bank of Nova Scotia.

The double-barrel action – the central bank abandoned its peg against the euro, and took interest rates further into negative territory - also threatens to hurt the Swiss economy.

But more importantly, it brings the credibility of the world's central banks even further into question, which in turn could well translate to further angst and uncertainty among investors.

"The ripple-out effect of this likely to be hard to quantify, and we could well get a lot more volatility as investors and markets in general try and work out what this sudden change in policy means for future central promises going forward, but it seems like that the U.S. dollar could well benefit, as well as gold, as investors look again at the more traditional havens," said chief analyst Michael Hewson of CMC Markets in London.

"This morning's moves also highlight how fragile financial markets still are … six years after the financial crisis despite trillions of dollars of central bank largesse, and the risk is that markets start to lose faith in these new masters of the universe as investors look at central bank promises with large dollops of skepticism."

The limit on the franc – a ceiling or a floor depending on which way you look at it – had been 1.20 against the euro.

The central bank abandoned the limit it brought in a few years ago, when the European crisis was raging, because Switzerland is a haven. Money was flooding in, driving up the franc, and hurting the economy.

The central bank said today it was retreating from that because the "overvaluation has decreased," though the franc remains high.

"We came to the conclusion that it's not a sustainable policy," SNB chief Thomas Jordan later told reporters.

It also moved a key rate further into negative territory, at -0.75 per cent, to try to limit the funds that would flow in because of the dramatic change in currency policy.

But it was only recently that the central bank vowed to defend the limit, and the move comes just one week before the European Central Bank is expected to launch an all-out program of quantitative easing, an asset-buying stimulus program known as QE.

If that prompts further depreciation of the euro, the Swiss would have had to be much more forceful in defending that limit.

There won't be much shock if the ECB launches QE next week, as everyone expects the move.

The awe is questionable, too, given that there are questions over how successful it would be.

"The timing of the decision could spur further expectation over what action the ECB is likely to take at its January 22nd meeting and suggests that the SNB felt that they would have had difficulty maintaining the floor with ongoing EUR depreciation," said Scotiabank's Ms. Sutton, referring to the euro by its symbol.

There's also speculation that the Swiss will now intervene in currency markets.

"The SNB clearly does not believe that the upward pressure on the Swiss franc from inflows due to ECB policy, Greek uncertainty, the Ukraine crisis and Russian sanctions will pass soon," said Kit Juckes and Alvin Tan of Société Générale.

"So the SNB has decided to jump to 'Plan B' rather than persist with the previous one in the (futile?) hope that pressure would ease any time soon," they added, referring to the move as a market bombshell.

"The SNB is not 'giving up' but rather, changing tack."

The decision also shocked Swiss industry, which is clearly worried by the move.

"Today's SNB action is a tsunami; for the export industry and for tourism, and finally for the entire country," Swatch Group AG Chief Executive Officer Nick Hayek told Bloomberg News. "Words fail me."

Markets mixed
The reaction inside Switzerland was dramatic, as the market plunged amid the speculation over the fate of Swiss exporters and the broader economy.

But other markets reacted as well, largely on the currency side, and there's promised uncertainty going forward in already uncertain times, given the plunge in oil and other commodities, and what's expected from the Federal Reserve and ECB.

"The reaction to this is likely to wide-reaching and cause a huge issue in terms of not just currency markets but equity markets as well," said Alpari chief market analyst James Hughes.

"In Europe we saw a lot volatility in stock markets as well, with the initial moves being massive irrational swings in either direction as traders tried to come to grips with what the removal of the floor actually means," said market analyst Craig Erlam of Alpari.

"Once prices stabilized, we saw a steady rally in Europe as people began to speculate on why the SNB would suddenly remove the floor," he added.

"One explanation could be that the ECB has warned the SNB of an impending large quantitative easing package – with many expecting the announcement next week when the central bank meets – and they have concluded that they are unable or unwilling to take on the fight."

The decision is expected to hit Swiss stocks even further.

"We expect a stronger currency to be negative for Swiss equities because the equity market is dominated by international companies with substantial costs and revenues outside Switzerland," said Peter Sullivan and Robert Parkes of HSBC.

"So far this is broadly what we are seeing. The Swiss equity market is dominated by international companies but there are some domestic companies which might explain why the equity market has fallen by a smaller percentage (10 per cent) than the currency appreciation (15 per cent at the time of writing)."

The U.S. retail giant announced today it has filed in the Ontario Superior Court of Justice for protection under the Companies' Creditors Arrangement Act, the equivalent of Chapter 11 proceedings in the United States.

The move affects more than 130 stores and some 17,600 employees, The Globe and Mail's Marina Strauss reports.

"When I joined Target, I promised our team and shareholders that I would take a hard look at our business and operations in an effort to improve our performance and transform our company," said Target chief executive Brian Cornell.

"After a thorough review of our Canadian performance and careful consideration of the implications of all options, we were unable to find a realistic scenario that would get Target Canada to profitability until at least 2021."

Target expects a hit of $5.4-billion (U.S.) in its fourth-quarter results because of the move, and a further $275-million this year.

If the court process works in its favour, almost all of its Canadian employees not needed for the full shutdown period would receive at least 16 weeks of compensation, both wages and benefits, via an employee trust.

The stores will remain open for the "liquidation process," it added.

Bombardier cuts deep
Bombardier Inc. is slashing 1,000 jobs in Mexico and the U.S. and warning of lower profitability and cash flow than originally targeted for 2014, The Globe and Mail's Bertrand Marotte reports.

The jobs being cut are in Querétaro, Mexico, and Wichita, Kansas.

The Montreal-based plane and train manufacturer also said today it's putting its Learjet 85 program on "pause" as orders for the new light aircraft have not come in as initially anticipated.

The company plans to book a $1.4-billion (U.S.) pre-tax special charge in the fourth quarter of 2014 mainly related to the impairment of the Learjet 85 development costs.

Canada to delay budget
The Canadian government won't release its next budget until at least April, a delay meant to give Finance Minister Joe Oliver more time to assess the impact of plunging oil prices on the economy, The Globe and Mail's Bill Curry and Jeff Lewis report.

Mr. Oliver made the announcement Thursday in an address to the Calgary Chamber of Commerce.

"Given the current market instability, I will not bring forward our budget earlier than April," Mr. Oliver said in a speech in Calgary today.

"We need all the information we can obtain before finalizing our decisions."

The federal fiscal year begins April 1 and federal budgets are normally released in February or March.

BlackBerry comes back to earth
If you bought shares of BlackBerry Ltd. in yesterday's mad rush, you've already done this math:

The smartphone maker's shares surged 30 per cent yesterday on a report of a takeover approach from Samsung. Minus whatever today brings.

Oops, BlackBerry said it wasn't in any talks.

Today, the stock was down almost 19 per cent by late afternoon.

As The Globe and Mail's Jacquie McNish and Sean Silcoff report, BlackBerry has turned away several approaches over the past few months.

The Reserve Bank of India also cut its benchmark rate, though with nowhere near the market impact of its Swiss counterpart.

The main rate was chopped by one-quarter of a percentage point to 7.75 per cent. 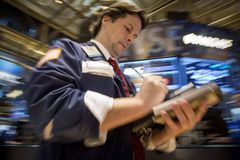