Toronto-Dominion Bank is flashing “cautionary yellow” warning signals about the frothy nature of the Toronto and Vancouver housing markets.

And given that yellow comes in different shades, Toronto is more worrisome than Vancouver, TD economists Derek Burleton and Diana Petramala warned in a new study of the two markets.

To be clear, Mr. Burleton, TD’s deputy chief economist, and Ms. Petramala aren’t forecasting a crash. Rather, the bottom line is to “proceed with caution” as they project a soft landing.

“When we put it all together, key housing indicators on balance continue to highlight the vulnerability of the Toronto and Vancouver housing markets to a significant correction in activity and prices,” they said.

“In light of its hotter price performance over the past three to five years and greater supply risk, this vulnerability appears to be comparatively high in the Toronto market,” they added.

“Still, even in Toronto, the same metrics would assign a ‘medium’ rather than ‘high’ risk to the kind of painful and disorderly price adjustment that was endured in the United States a half-decade ago.” 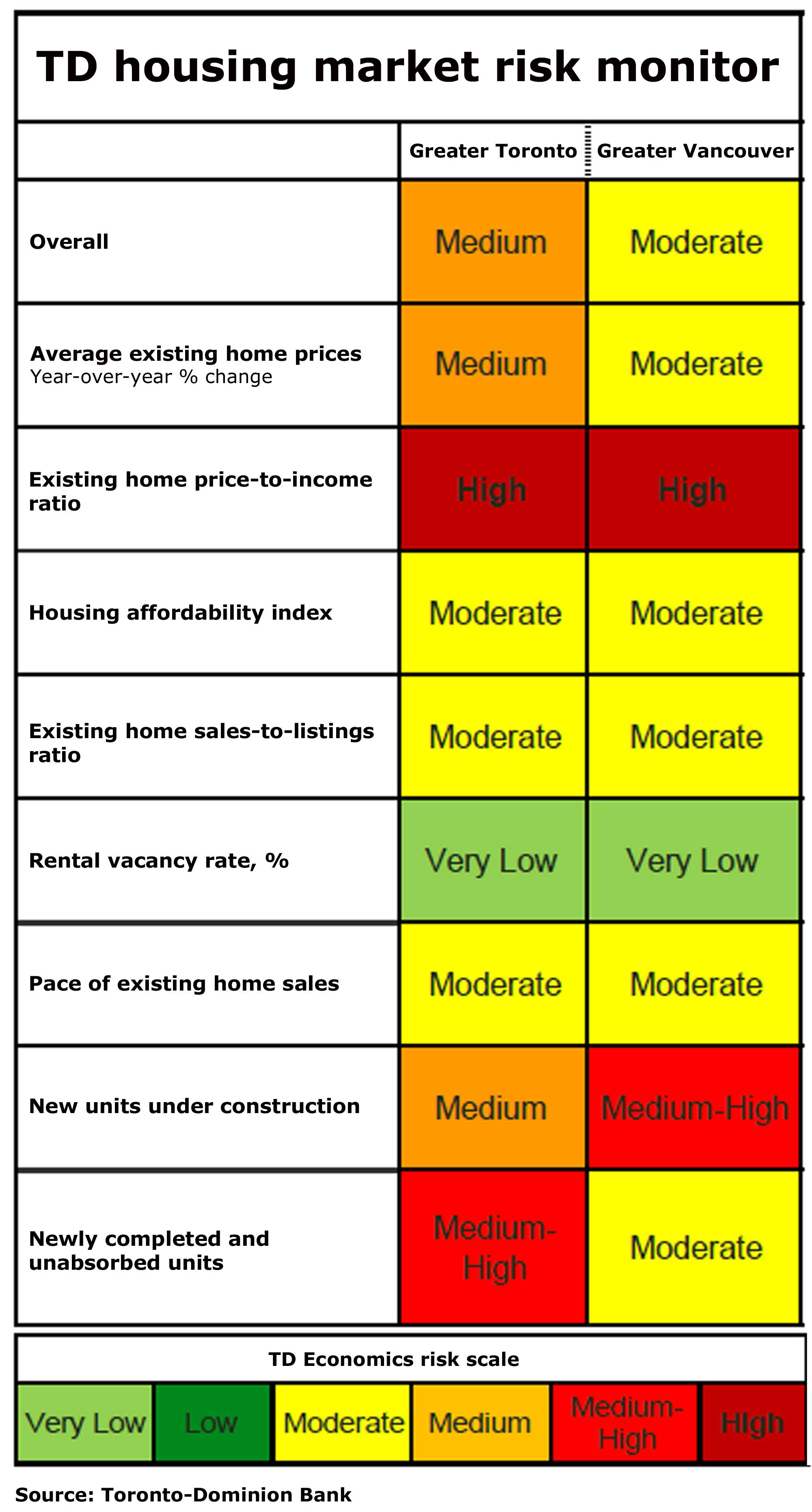 The TD economists looked at a variety of measures, seen in the chart above, in their “housing market risk monitor,” noting that the run-up in prices in the greater Toronto and Vancouver areas has sparked further talk of a bubble.

“While the metrics provide some contrasting signals both within and across the two markets, the balance of evidence places the risk of a steep and painful price adjustment in the medium-to-moderate camp,” they said.

“Put another way, indicators are generally flashing a cautionary yellow rather than green (low risk) or red (high risk).”

They expect a “moderation” in the market in the current second half of this year and into next year, but there’s a warning there:

“To the extent that the Toronto and Vancouver markets continue to gain strength in the coming months, the risk profile would rise in tandem. As such, a close monitoring of incoming data for signs of further froth accumulation will be critical.” 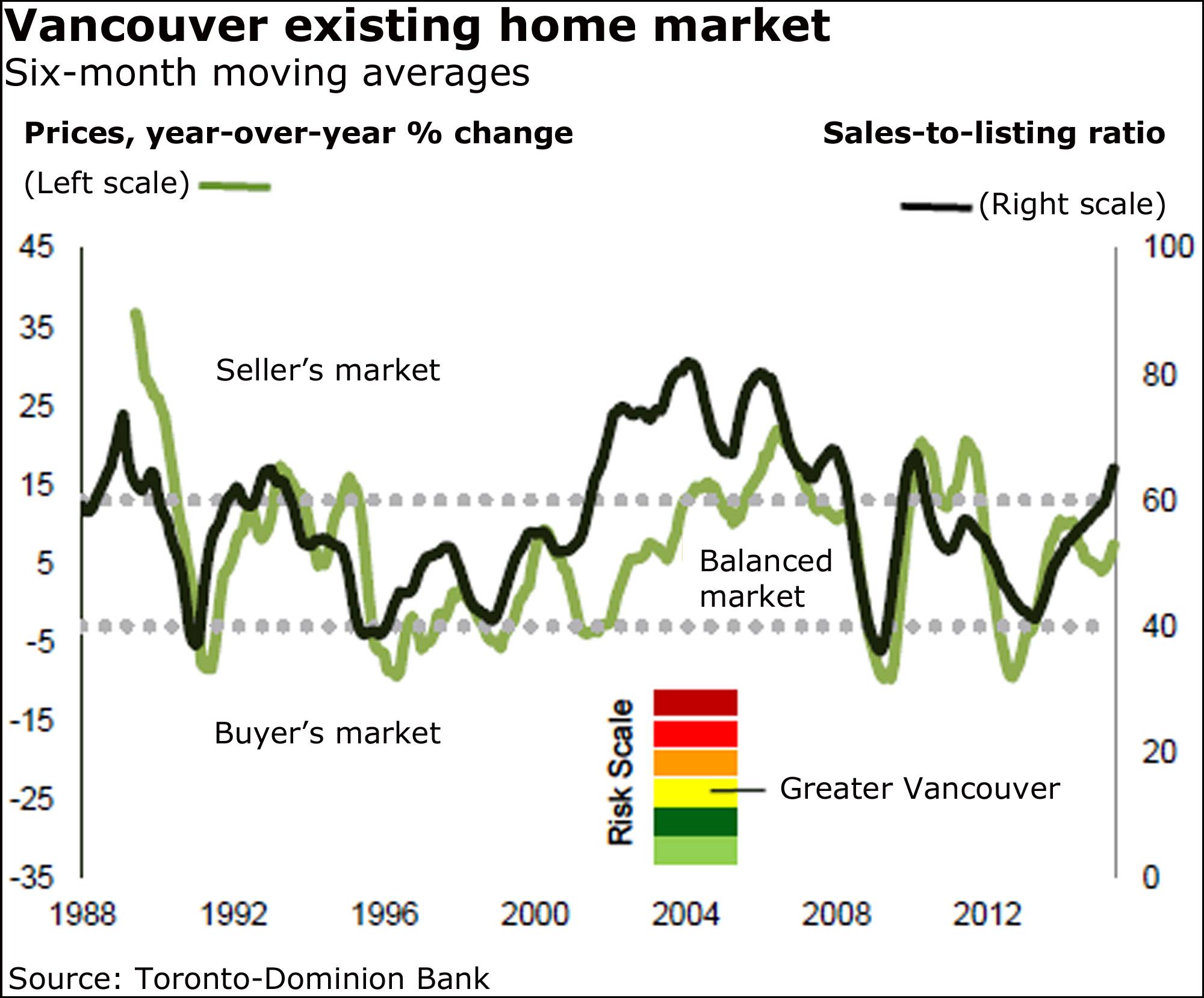 The “quality-adjusted” price gain in Vancouver was more than 10 per cent in June from a year earlier, though just 2 per cent to 3 per cent over the last three to five years because of the 2012 correction. 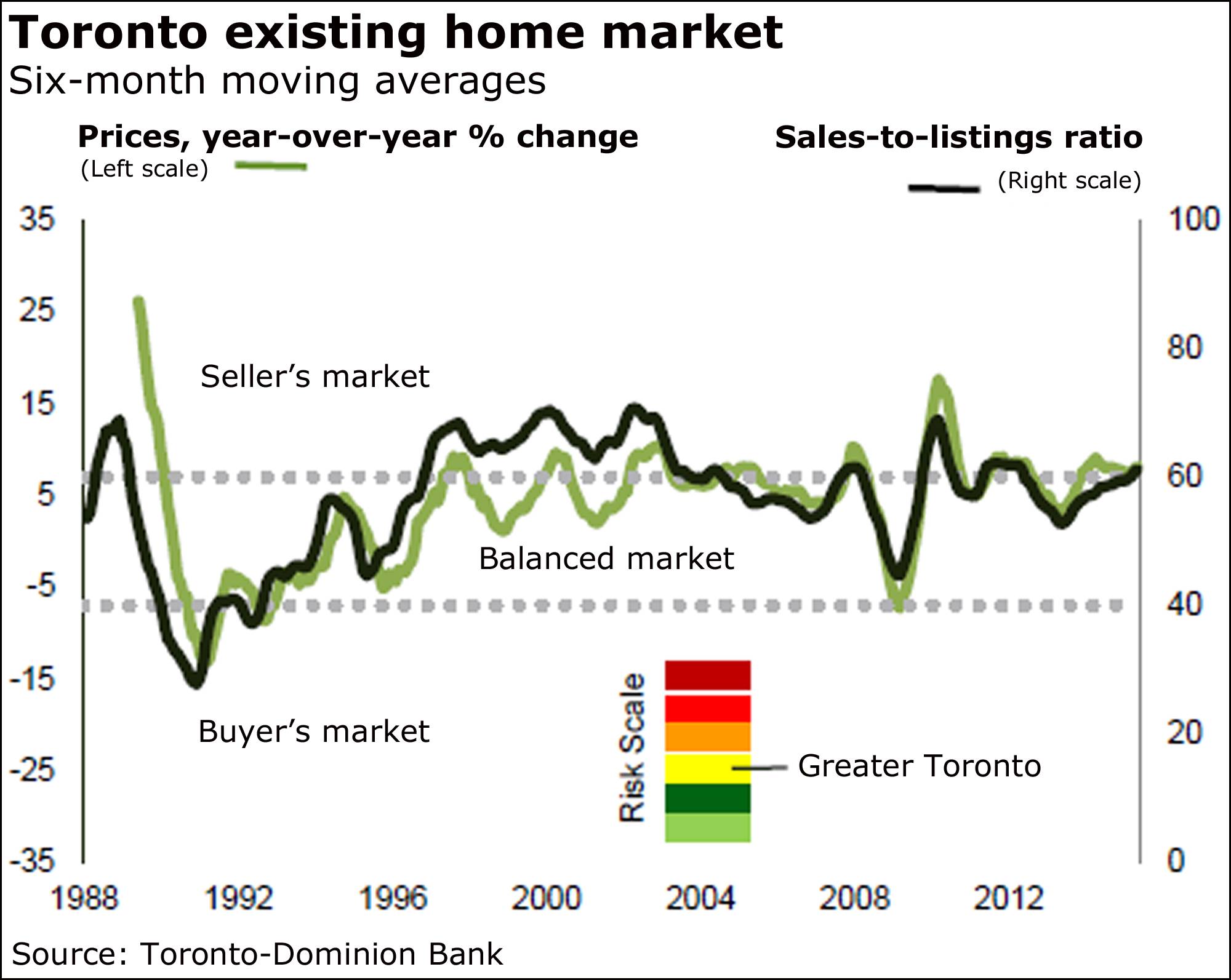 Toronto prices, on the other hand, have climbed by up to 6.5 per cent in the same period.

But the best “tell-tale” sign of a bubble is an unsustainable surge, in markets where gains are “speculative-driven, exponential in fashion and where increases occur over a sustained period.”

As an example, they cited the Toronto and Vancouver crash of the early 1990s, in the wake of price gains of up to 25 per cent in the years running up to the collapse.

Overbuilding seems to be more of a threat in Toronto, they added, citing the fact that condo developers “appear to be holding onto a record number of newly completed but unsold units.”

But the Toronto rental market is tight, they said, which should provide some relief on that front.

Some of the announcements by the Canadian government since last night (in no particular order because it was too hard to keep track of them):

“﻿Government of Canada funds three projects aimed at bolstering productivity and supporting the start-up and expansion of businesses in the region.”

“On July 31, Pat Perkins, Member of Parliament for Whitby- Oshawa, will announce a Government of Canada investment in the Whitby Small Craft Harbour on behalf of the Honourable Gail Shea, Minister of Fisheries and Oceans.”

“The Honourable Tim Uppal, Minister of State (Multiculturalism) and Member of Parliament for Edmonton-Sherwood Park, will announce Government of Canada support that will help young Canadians find jobs.”

Canada’s economy is on the ropes.

Gross domestic product contracted in May by 0.2 per cent, marking the fifth decline in a row and supporting the view that the economy shrank again in the second quarter of the year.

“There is no sugar-coating this one,” said chief economist Douglas Porter of BMO Nesbitt Burns. 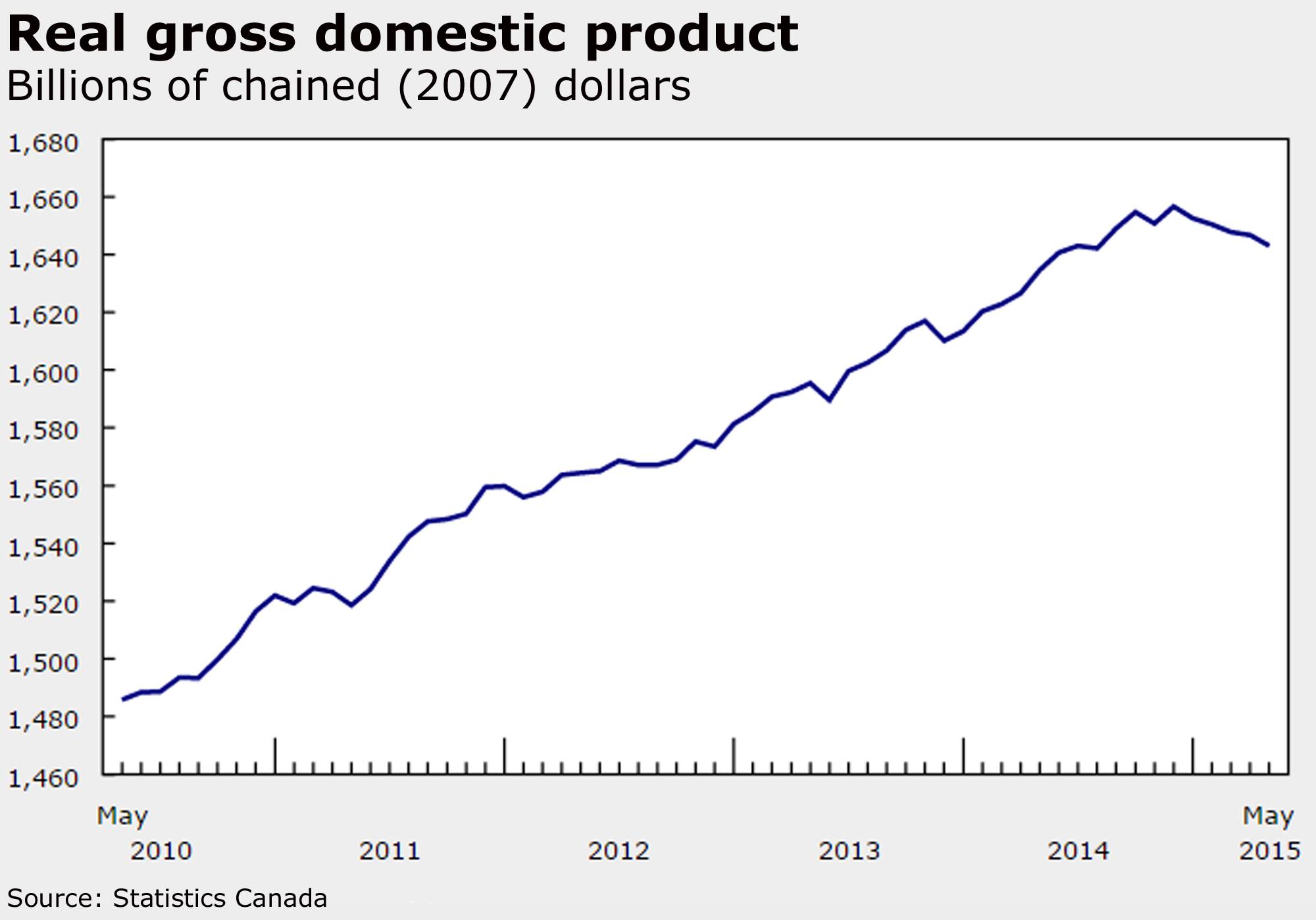 The Bank of Canada has already projected that the second-quarter will show a decline of 0.5 per cent, on the heels of the first-quarter contraction of 0.6 per cent.

“The Canadian economy isn’t out of the woods just yet,” said Nick Exarhos of CIBC World Markets.

The showing was worse than economists expected, driven down by slumps in manufacturing, mining and an already depressed oil industry.

It’s worth noting the hit to manufacturing, which suffered a contraction of 1.7 per cent in May after flatlining in April, given the hopes of the central bank and others that the weak Canadian dollar will boost the sector.

“Canadian manufacturing output is on a clear downtrend, and is now at levels that were last seen over a year ago,” Mr. Exarhos said, noting that the hit from the country’s factories was even bigger than that from oil.

“Oil and gas production was down 1 per cent, though more normal operations at oil sands facilities which have been hamstrung by unusually large maintenance outages and wildfires should see some better results ahead,” he added.

“All told, another disappointing reading on the Canadian economy, though not enough to create the chance of a material downside miss versus the BoC’s already weak projection for the second quarter.”

The Bank of Canada and others are still counting on a pick up in the second half of the year, and it’s interesting to note that all this is taking place against the backdrop of a looming federal election.

And if the central bank were to cut rates again, as it has twice this year, that could well come in the midst of the campaign.

BMO’s Mr. Porter, for one, believes the economy will spark in the second half of this year amid a better U.S. picture, more buoyant auto production and some fiscal stimulus.

“But, there is no debating that the steady drum-beat of bad news raises doubts on that relatively sunny outlook,” he added.

“For markets, this soft report keeps the bank more biased to ease and is just another factor that will keep the Canadian dollar heavily on the defensive through the second half of this year.”

From pipelines to bakeries and energy companies, corporate results are flooding in again today.

Russia’s central bank has cut its key rate by half a percentage point to a still-high 11 per cent, warning of economic woes.

“The economic situation in Russia will further depend on the dynamics of world energy prices and the economy’s ability to adapt to external shocks,” the Central Bank of the Russian Federation said today.

“At the same time, the scenario with oil prices remaining US$60 per barrel for a long time is more probable than it was in June.”