Canadian homeowners and potential buyers face a 2017 of opposing forces.

And it’s anyone’s guess at this point as to how it all ends.

On one side are rising longer-term interest rates that will push housing costs up, and on the other attempts by the B.C. and federal governments to hold prices down.

“2017 is likely to see a tug of war between rising longer-term interest rates and market-cooling policy measures pulling affordability in opposite directions, the net effect of which is unclear at this point,” said Royal Bank of Canada chief economist Craig Wright and his colleague, senior economist Robert Hogue.

The federal government’s mortgage and tax measures, which came into effect in October and November, could help ease “affordability pressure” over time, Mr. Wright and Mr. Hogue said in a recent report.

“The near-term effects are likely to be quite complex, however,” the RBC economists said.

“Rule changes also are poised to restrict or alter the pricing of certain mortgage options available in the marketplace, similarly constituting further impediments to ownership for some buyers.”

At the same time, longer-term rates have jumped since the U.S. election, fuelled by the outlook for Donald Trump’s fiscal plans and expectations of higher inflation, and pushing up Canadian yields to which mortgage rates are tied.

“Therefore, the recent jump in bond yields and the likelihood of further increases in the period ahead pose a material risk to housing affordability in Canada in the short to medium term.”

Analysts expect this won’t let up, either, which could ripple through housing markets at the same time as the new policy measures.

“The Bank of Canada may have effective control on the very short end of the yield curve but the country remains largely a ‘price-taker’ for longer-term maturity bond instruments, for which prices are determined on the global bond market,” said Laurentian Bank chief strategist Luc Vallée and senior economist Eric Corbeil.

“In 2017, expansionary U.S. fiscal policy and a tempering of quantitative easing in Europe will contribute to increasing long-term interest rates globally, and Canada will have a difficult time escaping it.”

The B.C. government is playing a role, too, with its recent 15-per-cent tax on foreign buyers of Vancouver area properties, and observers expect to see a further cooling in a city already showing signs of a deflating bubble. 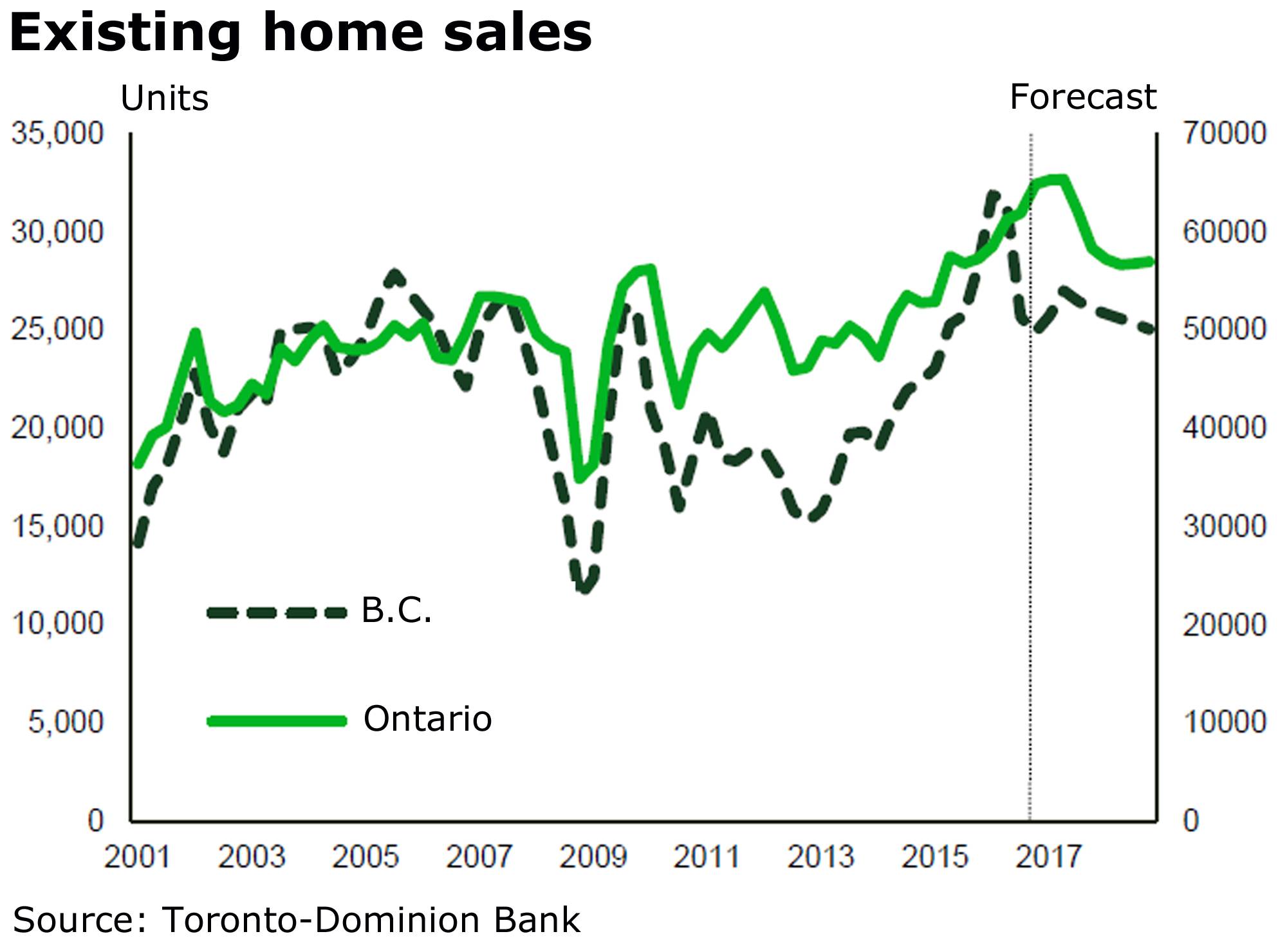 Toronto-Dominion Bank economists forecast a soft landing for housing markets across the country, though Toronto still has room to run, with some foreign money probably now flowing in after the B.C. levy was introduced.

In their most recent outlook, TD chief economist Beata Caranci, senior economist Michael Dolega and economist Dina Ignjatovic projected a decline of 7.5 per cent in existing home sales in B.C. this year, and a further drop of 3.4 per cent in 2018. 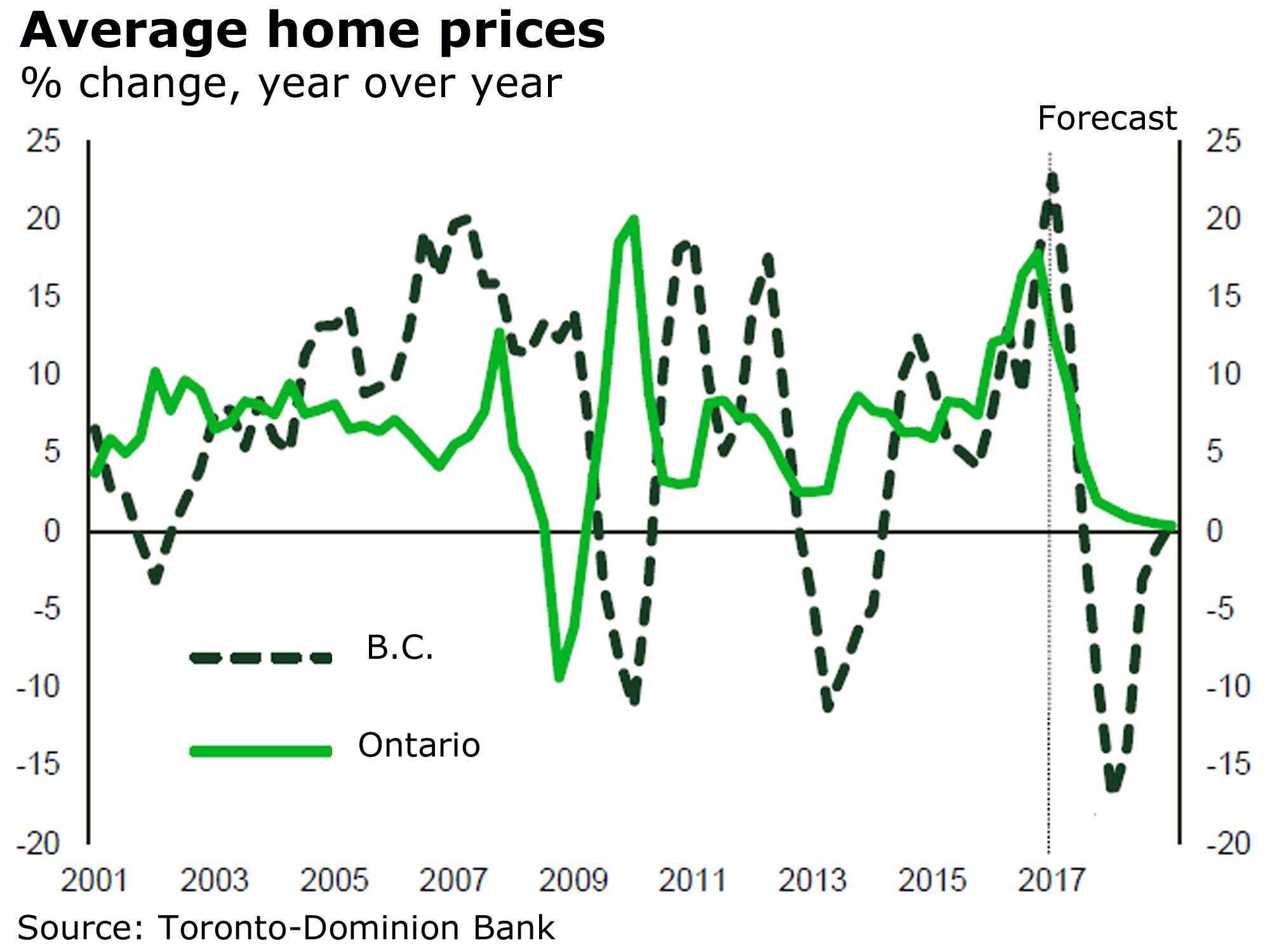 They also forecast that average home prices in Canada’s westernmost province will tumble by 9.2 per cent this year, and pick up by just 1.4 per cent next.

Ontario is a different story, with sales forecast to rise by 1.9 per cent this year, and stumble by 9.4 per cent in 2018.

“The changes afoot reinforce our long-held view of a soft landing both nationally and in the two markets of Toronto and Vancouver,” said the TD economists.

“While we’re comfortable with this thesis of an orderly slowdown, predicting the timing and extent of any slowdown (amid these numerous moving parts) is no easy feat.”

Encana Corp. now expects it will top its previous forecasts.

The Canadian energy company said it won’t release full updates until it reports fourth-quarter results in mid-February, but, at this point, projects its corporate margin will come in 25-per-cent better than projected in October.

“Encana now expects to deliver a corporate margin of greater than $10 per barrel of oil equivalent (BOE) in 2017,” the company said, citing price assumptions for oil and gas.

That’s up from the $8 it forecasts at its fall investor day event, the “result of anticipated lower costs through the year and increased total volumes expected in the second half of 2017,” it said.

“We enter 2017 with a robust hedge position to protect cash flow and support our capital program,” chief executive officer Doug Suttles added in a statement.