The bears are back in town

The Canadian dollar’s flirtation with the “long” side of the ledger didn’t last too long.

Last month marked a notable shift in sentiment when the weekly report from the U.S. Commodity Futures Trading Commission showed a move in bets on the currency to a net long position after a lengthy period in the red.

But the most recent report, released Friday and based on numbers from last Tuesday, show a net short again.

“CAD sentiment has fallen back into balance, its $0.7-billion deterioration driven by a build in gross shorts - the largest build since the oil-driven concerns from mid-October,” said currency strategist Eric Theoret of Bank of Nova Scotia, referring to the loonie by its symbol.

“The shifts in CAD sentiment continue to be driven by the short side, and this week’s acceleration hints to an increasingly bearish bias,” he said in a report on the CFTC numbers.

Currency analysts, by the way, expect the loonie to continue to decline. It was at just above 80.5 cents this afternoon.

"I moved to Toronto because I thought the subway worked better than at home."

As The Globe and Mail’s Jacquie McNish, Janet McFarland and David Berman report, the two sides were negotiating yesterday for more than $10-billion (U.S.) of loan assets.

An agreement between GE and the Canada Pension Plan Investment Board could be announced as early as today.

Home construction is on an upswing in Canada, driven by multiple units such as condos.

Housing starts climbed to an annual pace of 201,705 in May, according to Canada Mortgage and Housing Corp. today, up from 183,329 in April.

Starts of multiples in urban areas surged almost 17 per cent to 126,367, while those for detached homes were little changed at 58,868.

Separately, Statistics Canada reported today that the value of building permits rose 11.6 per cent in April to $7.8-billion, largely because of construction plans in Ontario.

LiftoffThe market’s term for the Federal Reserve’s first rate hike, now seen as possibly in September. It certainly won’t mean a liftoff for the loonie.

Jobs and the Fed

Economists are looking closely at job creation in the United States as they speculate on the date of liftoff.

“The leading economic indicator (LEI) suggests that a new peak in full-time employment will be reached in the coming months,” National Bank Financial’s chief economist said in a report Friday after the latest measure of the U.S. economy showed 280,000 jobs created in May, though the unemployment rate inched up to 5.5 per cent because of an expanding labour force. 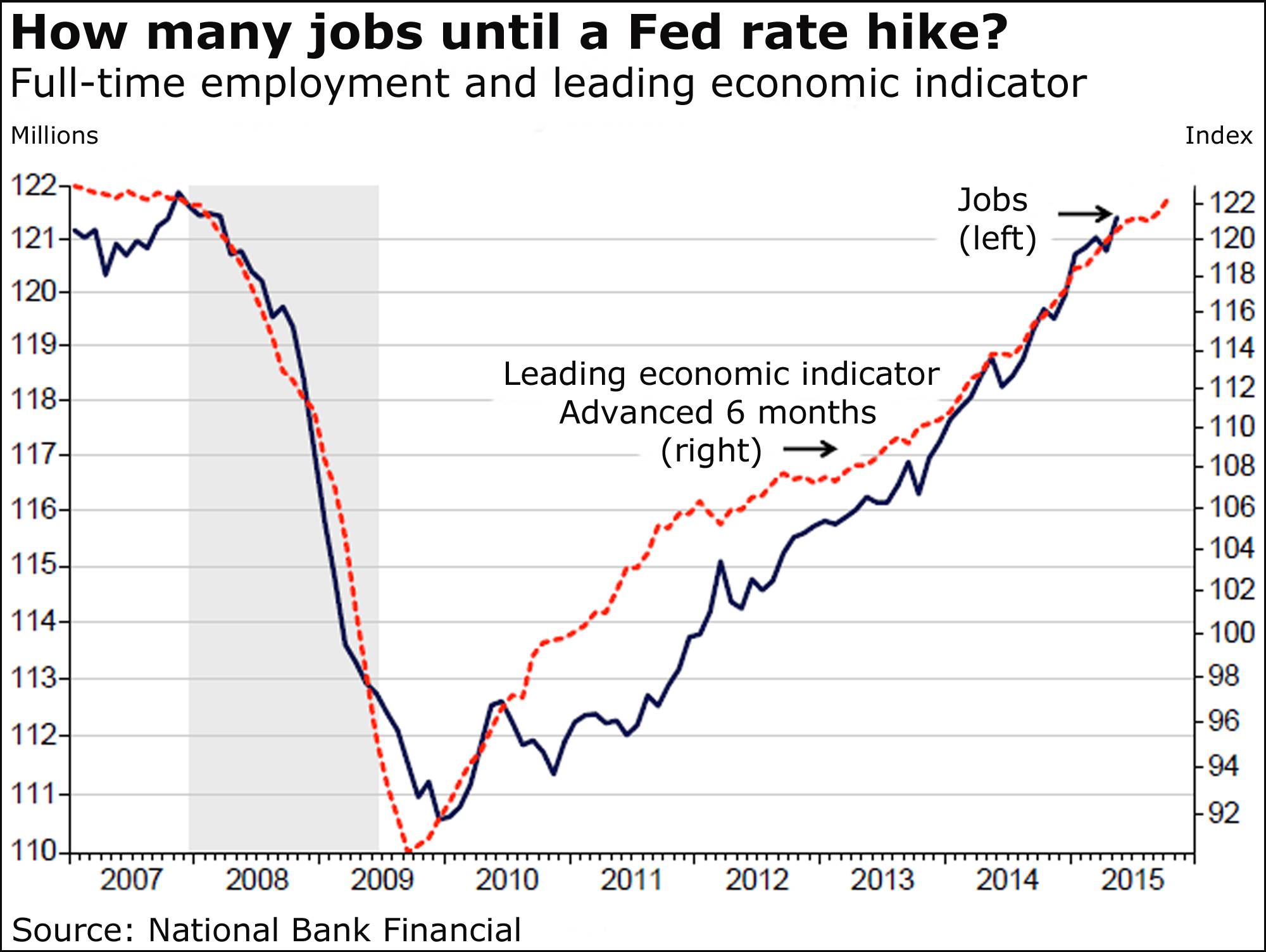 “At this juncture, we continue to expect the first rate hike in September. All factors considered, we expect a total of no more than 50 basis points of U.S. monetary firming in 2015 as the Fed needs to guard against a surging [U.S. dollar].”

Other observers agree America’s jobless rate is close to where the U.S. central bank wants it.

“Sustaining this trend would reduce the unemployment rate to 5.1 per cent by December,” she added.

“The Fed’s latest projections put the estimate of longer-run unemployment at 5 per cent to 5.2 per cent, which means the central bank is on track to fulfil the employment side of its dual mandate before the end of this year.” 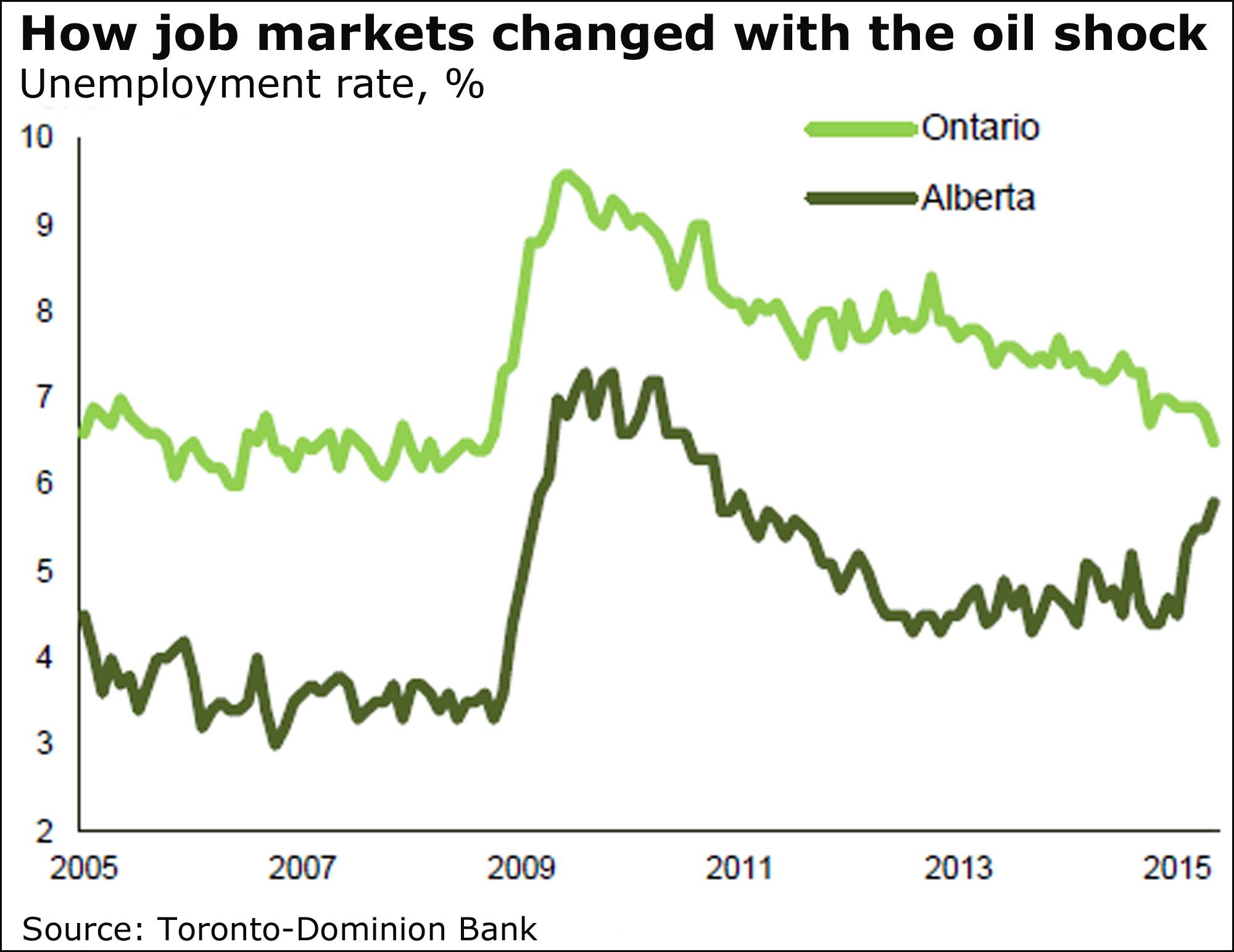 Expect fresh readings and analyses on two of our national obsessions: Housing markets and debt.

We’ll get to see how home prices fared in May, based on the latest reading of the Teranet-National Bank house price index.

National Bank expects to see an annual rise in home prices of 4.2 per cent, compared to April’s 4.4 per cent, which would mean “a fifth stright increase in prices, albeit below seasonal norms.”

Along with house prices, of course, goes debt. And there will be new information on that front, as well.

First, on Thursday, the Bank of Canada releases its semi-annual review of the financial system.

“Household imbalances are likely to be at the top of this once again, contributing to what the last policy statement characterized as ‘elevated’ risks to financial system,” said senior economist Benjamin Reitzes of BMO Nesbitt Burns.

“That language is a bit firmer than in the prior few statements, though it was followed by the bank noting that they ‘appear to be evolving as expected,’ suggesting [Bank of Canada Governor Stephen] Poloz isn’t any more concerned on this front.”

You can put an actual number to that a day later when Statistics Canada releases its first-quarter report on debt and wealth.

In the fourth quarter, the key measure of household credit market debt to disposable income touched a fresh record of 163.3 per cent, which means families owed about $1.63 in debt for every dollar of disposable income, as Statistics Canada puts it.

At the same time, household net worth on a per-capita basis reached $233,000.

“Most notably, the oft-cited household debt-to-income ratio is expected to nudge lower to 163 per cent in the quarter from 163.3 per cent in Q4, as a 1.5-per-cent gain in personal disposable income outpaces a 0.8-per cent advance in household debt,” said Royal Bank of Canada.

“Such a development will likely be viewed favourably by the BoC, and provide some reassurance that the January rate cut is not encouraging excessive credit growth.”

In the United States, the week’s key reading is on how retail sales did in May. That’s expected to show a gain of 1.1 per cent or more.

On the corporate front, markets will be watching for the latest quarterly results from Lululemon Athletica Inc., Hudson’s Bay Co., Transcontinental Inc. and Prada, among others.

“Our future will be defined by how well we deliver on strategy, impress clients and reduce complexity.”John Cryan, Deutsche Bank CEO-designate

Video: Is an all-robot factory good or bad?