By all rights, Stephen Poloz should not be a happy man today.

The Bank of Canada governor has been counting on a lower currency to help boost exports and give the economy a lift, and, indeed, bemoaned its stronger level last week.

He also managed to knock the loonie down when he told reporters that an interest rate cut is still on the table depending on how things play out.

But the loonie has staged a remarkable - and inexplicable, at this point - recovery since then.

It’s now above the 76-cent (U.S.) mark, with the greenback under pressure at this point, but more importantly is how well it has fared against other currencies since Donald Trump won the presidency.

As Bank of Nova Scotia currency strategists Shaun Osborne and Eric Theoret noted, the Canadian dollar had had the best showing among G10 country currencies since the U.S. election.

That is, until Mr. Poloz and his Bank of Canada colleagues held their benchmark rate steady and released their monetary policy report last week.

Coupled with Mr. Poloz’s comments, it all “left the distinct impression that the central bank was somewhat concerned about the impact of the broad rise in the CAD through the latter part of 2016,” said Mr. Osborne and Mr. Theoret, referring to the loonie by its symbol.

“Those comments served to check - significantly - the CAD’s rise but the respite has been brief,” they added in a report. “The CAD is once again outperforming and is currently the top-performing G10 currency since Friday.”

Not only is this surprising, there’s “no good reason from my point of view,” Mr. Osborne, Scotiabank’s chief currency strategist, said later, adding he has heard a few reasons for the move.

The effective exchange rate of both the U.S. and Canadian dollars, or that against a basket of currencies, tend to move in opposite directions, but “there has been a distinct alignment in the trends of both in recent weeks which dates precisely to the U.S. presidential election,” he and Mr. Theoret said.

Mexico’s peso has been hammered because of Trump-related concerns, but not the loonie. 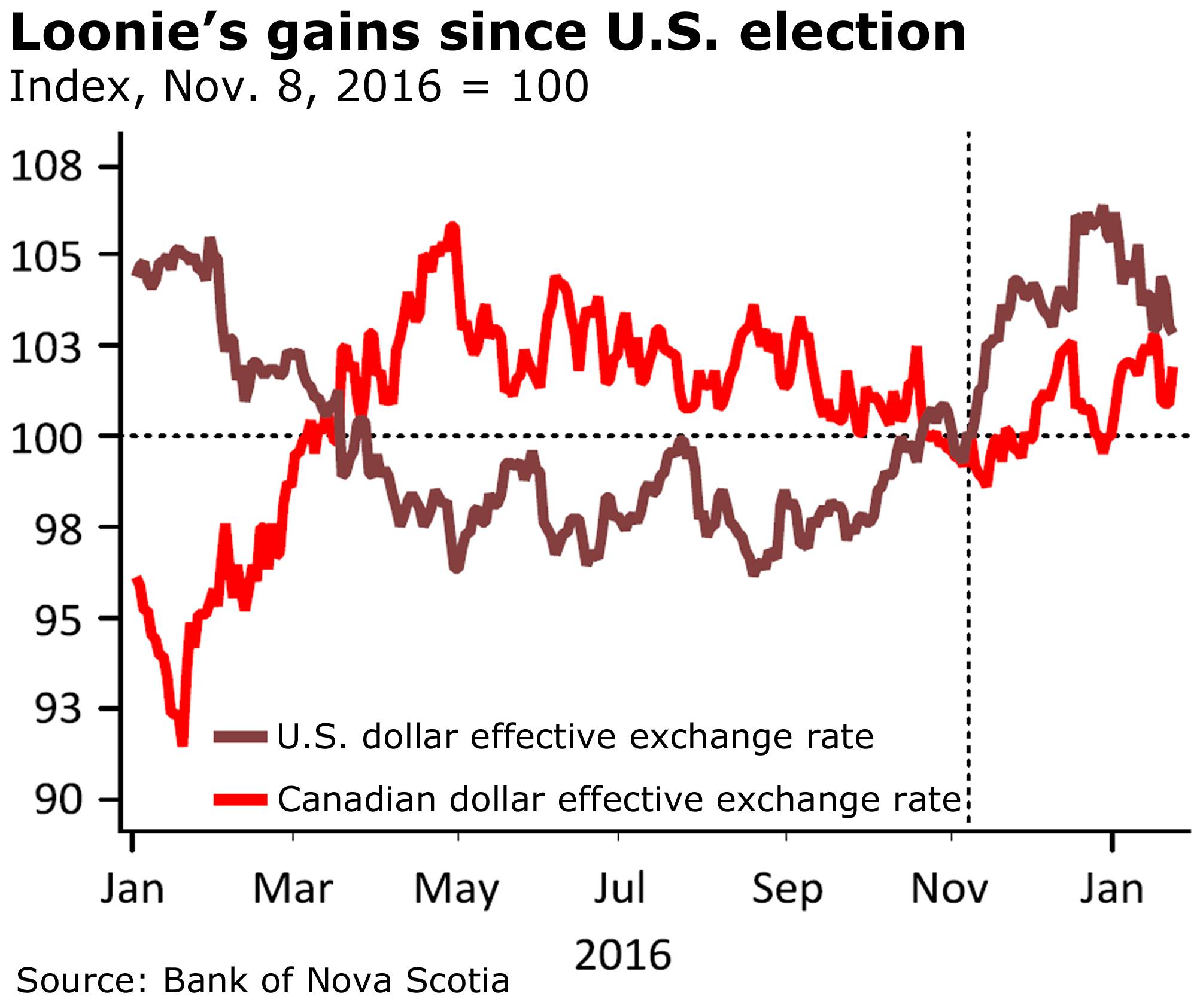 “With the benefit of hindsight, one can argue that the new administration is less concerned about relations with its northern NAFTA counterpart than its southern one,” said Mr. Osborne and Mr. Theoret.

That certainly appears to be the case, based on the comments and actions of Mr. Trump and administration officials.

“But that has only become apparent in the very recent past,” they added.

“And it is arguably still too early to determine how the chips will fall if a broader revision of Canada’s trading relationships occurs. It was certainly not immediately obvious that a pro-growth but inward-looking U.S. president would be good news for the Canadian economy. [Yesterday’s] news on Keystone XL is positive but, again, the immediate benefits for Canada are scant.”

“We do not believe that President Trump’s decision to move forward with Keystone XL is as bullish CAD as the initial market response would suggest,” he said.

“The near-term economic impact will be minimal, as most of the construction and related jobs would be in the U.S.,” he added.

“It will take another three to four years of oil sands development in order to reach the production capacity that the pipeline requires, and oil prices are not elevated enough to prompt a surge in domestic capital expenditure.”

Daniel Hui of JPMorgan Chase also agreed that the “fundamental impact” of Keystone on the loonie is limited.

More important are the signs of a more “co-operative approach” from Mr. Trump’s team to the relationship with Canada.

“In recent weeks CAD has come under more scrutiny, particularly because of its involvement in NAFTA and the new administration’s proactive stance towards renegotiating the trilateral treaty,” Mr. Hui said.

“But in the past week, there have been various ancillary indications that the administration was intending to differentiate Canada from Mexico in NAFTA renegotiations and that the overall approach would be more co-operative than confrontational.”

Don’t take all of this to mean that the loonie may still not be headed for a fall against the U.S. dollar, as analysts have projected, calling for the currency to dip to between 70 and 72 cents.

“Our bearish case for CAD did not assume Canada would be in the crosshairs of Trump’s confrontational trade policy,” Mr. Hui said.

“We had long recognized that Canada was not part of Trump’s trade rhetoric,” he added.

“Instead the risks were that for a country for whom 77 per cent of exports go to the U.S., even a marginal shift in the North American trading regime carried significant disruption risks, particularly if it more materially altered the trading relationship with Mexico.”

The S&P 500, Dow Jones industrial average and the S&P/TSX composite were also up, the latter playing with a record of its own.

“It may seem counterintuitive but however polarizing Donald Trump is, and is likely to continue to be, financial markets take a rather more cold-hearted view as basic resource and infrastructure plays push higher on the back of yesterday’s executive order with respect to the Keystone oil pipeline and his tweet yesterday that he will look at starting to implement his policy on building a wall on the Mexican border,” said CMC Markets chief analyst Michael Hewson. .

THE GLOBE AND MAIL » SOURCE: QUANDL