So much depends on where you live, of course, but 2015 is shaping up to be an exceptionally disappointing year for Canada’s economy.

The good news is that the hit from the oil shock and a soft U.S. economy should be in the rear-view mirror as we head into the second half of the year.

The bad news, though, is that it takes time to recover, at least in certain areas.

“Because the effects of weaker economic growth take longer to materialize in the job market and incomes, growth in these areas are expected to remain subdued for a few more quarters,” Toronto-Dominion Bank warned in a recent forecast. 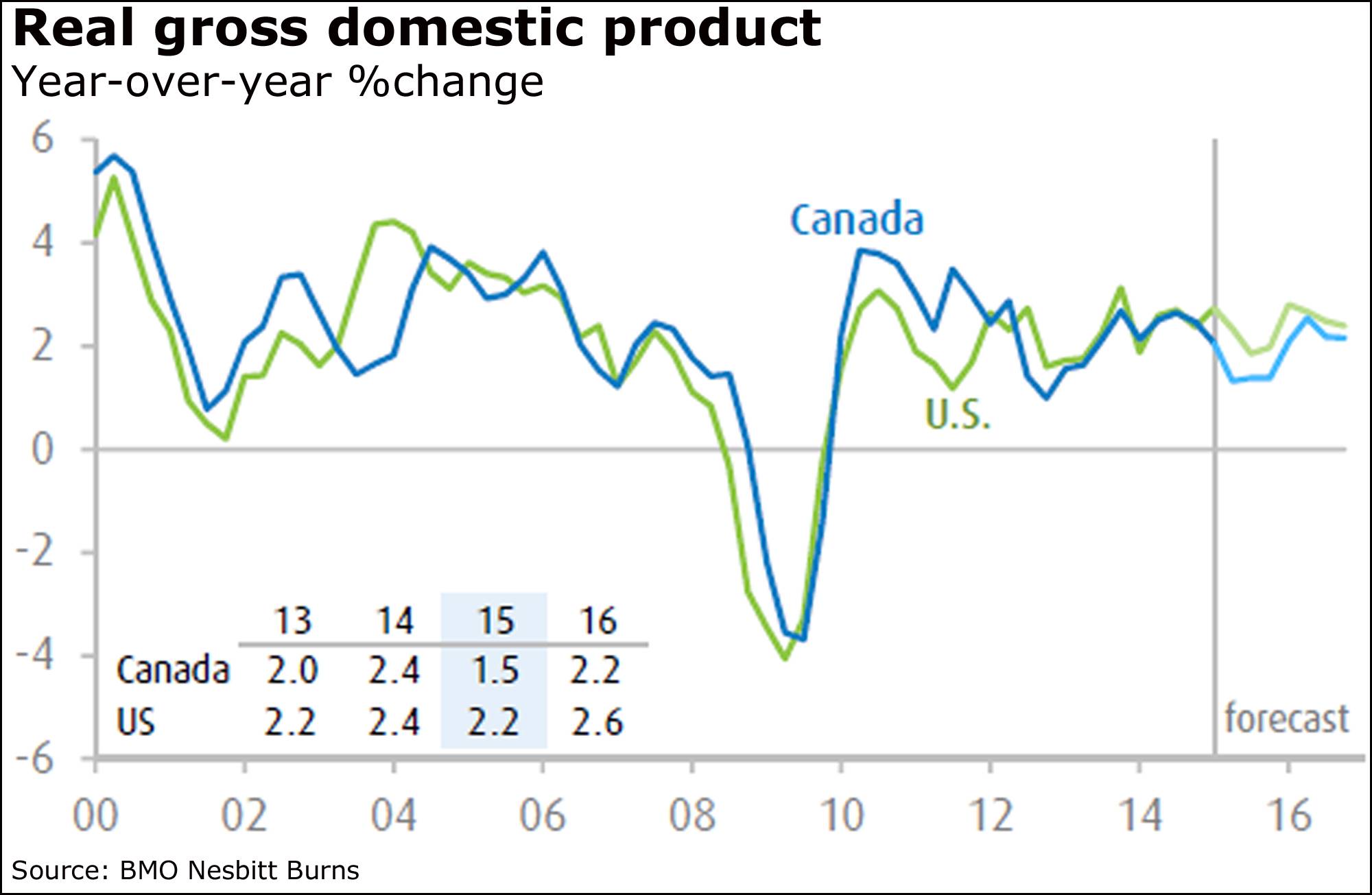 The TD report and a fresh outlook from BMO Nesbitt Burns show the first half of the year was basically a writeoff, though the next six months look better.

Still, Alberta and Newfoundland and Labrador face the threat of a recession, while Saskatchewan may “skirt by,” BMO Nesbitt Burns said in its forecast.

Both BMO and TD warn that unemployment will continue to remain just shy of 7 per cent.

To put it in perspective, BMO senior economist Sal Guatieri projected that economic growth will come in at 1.5 per cent this year, or the slowest in a non-recession year since Statistics Canada records began in the early 1980s.

Canada’s economy shrank at an annual pace of 0.6 per cent in the first quarter, and BMO believes the second quarter will show a rebound of just 0.5 per cent.

Having said that, it also calls for 3.5-per-cent growth in the third quarter, and 2.2 per cent in the fourth.

Also on the bright side, he projected a pickup in exports and about 2-per-cent growth in consumer spending this year because of recent employment gains.

That 2-per-cent pace for spending, though, is “relatively lackluster” from TD’s point of view.

“The benefits of low interest rates on household spending will face a counterweight from muted job creation and wage gains, as the hangover from plummeting oil prices lingers in the labour market,” the TD forecast said.

“Employers are expected to focus increasingly on extracting efficiency gains in a challenging growth and profit environment.”

BlackBerry Ltd. is making gains on the software side of the business.

BlackBerry posted a quarterly profit of $68-million (U.S.), or 13 cents a share, basic, compared to $23-million or 4 cents a year earlier.

Revenue, meanwhile, slipped to $658-million from $966-million. Of that, hardware accounted for about 40 per cent, services for 38 per cent, and software and licensing 21 per cent, the latter seen by chief executive officer John Chen as “key to BlackBerry’s future growth.”

“Our financials reflect increased investments to sales and customer support for our software business,” Mr. Chen said in releasing the results.

“In addition, we are taking steps to make the handset business profitable.”

BlackBerry added in its earnings report that it “continues to target sustainable non-GAAP profitability some time in fiscal 2016.”

What Greece and the euro zone do next

Markets may be cheering what appears to be a breakthrough in the Greek crisis, but uncertainties abound.

First is whether a final deal can be struck. Second is whether Prime Minister Alexis Tsipras can sell a deal at home. And third is the potential fallout from any final agreement.

Already, there are fears that factions within the Syriza party government, which was elected on an anti-austerity program, will fight Mr. Tsipras. And there are questions surrounding other governments in the euro zone.

“Assuming we do indeed get the last-minute deal everyone expects, then we will simply move on to wondering whether it can be ratified by individual parliaments and then how long it will last before we need another one,” said Kit Juckes, chief of foreign exchange at Société Générale.

The challenge, of course, is for Athens to not only strike a deal with the International Monetary Fund and other lenders, but one that will help the crippled country.

“This ‘deal’ does not necessarily address the real issues for Greece - its significant debt load and the fact that the measures proposed by Greece to its creditors seem even more austere,” said Brenda Kelly, head analyst at London Capital Group, citing the fact that €7.3-billion ($10-billion) of the almost €8-billion in proposed measures are related to taxes and social security contributions.

“In the short term, yes this tends to remove the initial hurdle for Greece - the release of funding in order to repay the IMF on June 30 and avoid a technical default, but a hike in taxation, including an increase in [the value added tax] on food service to 23 per cent without any quid pro quo debt restructuring is not exactly going to stoke growth or consumer confidence in Greece in the medium term.”

Acronym of the day

ELAEmergency Liquidity Assistance, a European Central Bank tool to aid banks with temporary troubles. In the case of Greece, it’s reportedly at $90-billion (U.S.). Not to be confused with Emergency Liquid Assistance, which all involved need just about now.

Construction spending on Canadian single-family homes in April, down 1.8% from a year earlier: Statistics Canada

Video: It's a long time from interview to job