I wonder what National Bank Financial would have done had The Big Short swept the Oscars.

Instead, its economists got to refer to “the Revenant loonie” in a new report that looks at the Canadian dollar's rebound and projects it will go higher yet. 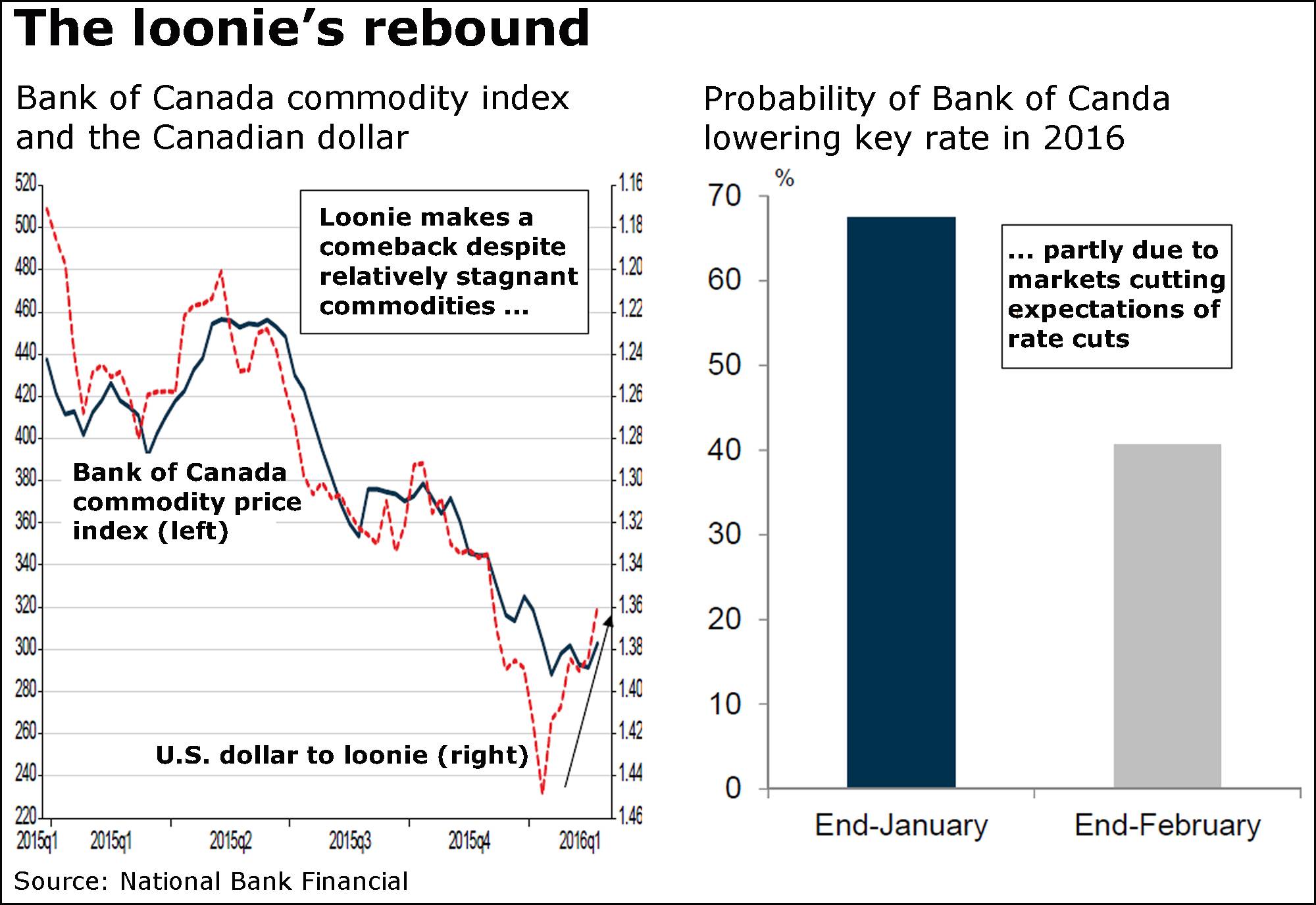 “Even Leo DiCaprio should be impressed,” the National Bank said.

“Mauled by bears and left for dead just a few weeks ago, the Canadian dollar is now back with a vengeance.”

They look at its plunge to almost 68 (U.S.) cents early this year, followed by its rebound to about 74.5 cents today, projecting 75 cents in the second and third quarters, 76 cents in the fourth and 77 cents early next year.

“The loonie’s Revenant-like performance was helped by a softening greenback, but markets are also looking at yields and starting to question whether or not the Bank of Canada really needs to cut interest rates considering that upcoming fiscal stimulus will provide a boost to the economy.” 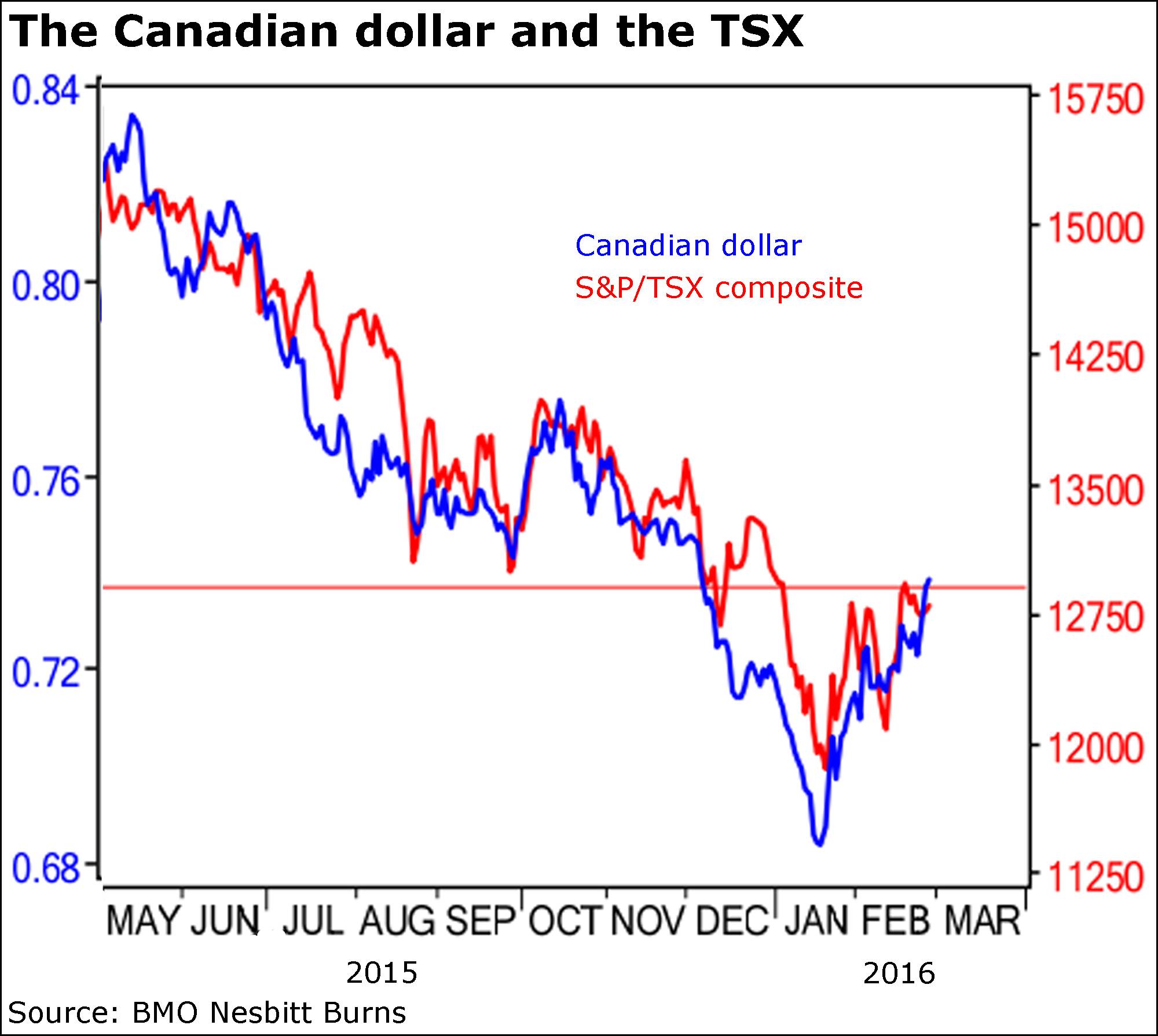 It’s not just the loonie, noted BMO Nesbitt Burns chief economist Douglas Porter, noting the currency ended February with a gain of almost 2 per cent since the start of the year.

“Aside from the yen, that leaves the [Canadian dollar] as one of the strongest currencies in the world this year, and a distant cry (up 8 per cent) from the 13-year lows hit Jan. 20,” Mr. Porter said.

“Not entirely coincidentally, the TSX also bottomed out the same day in January, and is now down just over 1 per cent so far this year - again, one of the best best outcomes among major markets,” he added.

“In fact, the correlation between the [Canadian dollar] and the TSX has been amazingly tight in the past year.”

It’s true that oil is affecting both, but Mr. Porter cited the fact that crude is still down 9 per cent this year.

“And also note that the correlation between the TSX and [Canadian dollar] was negative for much of 2012-14,” he said. “The broader re-emergence of risk-off/ris-on binary market moves has been the bigger theme.”

If Trump got to choose next Supreme Court justice ...

Better, but not great

It’s nothing to write home about. But, as Avery Shenfeld puts it, today’s GDP report was nonetheless “a bit of a pleasant surprise.”

The chief economist at CIBC World Markets was referring to the Statistics Canada report that showed the economy expanding at an annual pace of 0.8 per cent in the fourth quarter.

Expectations had been lower.

Thought when you look at it all on an annual basis, gross domestic product grew by just 0.5 per cent in the quarter compared with the same period a year earlier.

That, Mr. Shenfeld said, is “well below the pace needed to sustain a steady unemployment rate.”

Bank of Nova Scotia closed out the latest round of earnings among Canada’s big banks with a dividend hike and a jump in first-quarter profit.

Chief executive officer Brian Porter applauded the results despite “continued volatility in the markets and some moderation in select areas of our operations.”

Barclays PLC stock tumbled today after the British bank chopped its dividend and unveiled plans to sell its African operations.

The bank cut the payout to 3 pence from 6.5 pence.

“Shares of Barclays tanked over 10 per cent after the British bank caught markets by surprise by cutting its dividend by a half for 2016 and 2017, and selling off most of its Africa unit,” said CMC Markets analyst Jasper Lawler.

“CEO Jes Staley is continuing down the same path as predecessor Anthony Jenkins of stripping the bank back to its origins with a U.K.-U.S. focus.”

Deutsche Boerse may have a fight on its hands in its quest for London Stock Exchange Group.

Intercontinental Exchange said today it’s considering a rival bid, though it hasn’t made any decision yet, driving up LSE stock.

“The latter may now be forced to up its own offer, which has been described as a ‘nil-premium’ merger,” she added.

“A bidding war may be in the offing now and we can likely expect some choppy price action between now and March 22 - the deadline for Duetsche Boerse to submit a formal offer for the LSE.”

Unemployment across Europe is still elevated, but at least it’s heading in the right direction.

The euro zone’s jobless rate dipped in January to 10.3 per cent from 10.4 per cent a month earlier to mark the lowest level since August, 2011, the Eurostat agency said today.

Across the wider European Union, unemployment declined to 8.9 per cent from 9 per cent. For the EU, it’s the lowest since the 2009 depths of the recession.

Some countries, however, remain crippled by the number of people who can’t find work.

Greece, for example, is still suffering unemployment of almost 25 per cent, while Spain’s jobless rate sits at 20.5 per cent.