Ontario and British Columbia have a lot going for them.

They have the strongest economies in Canada. They’re churning out jobs. Each is benefiting in its own way from the oil shock. And anyone who owns a home in Toronto and Vancouver need only sit back and get richer by the day.

But there are risks with those rewards.

1. Analysts expect B.C. and Ontario to outpace the rest of the country in economic growth, taking the provincial crown from once-mighty Alberta. The latest outlook, from Laurentian Bank Securities chief economist Sébastien Lavoie, forecasts that gross domestic product in B.C. will top 2.5 per cent for the third year in a row, with Ontario beating the 2.2-per-cent growth forecast in the provincial budget. BMO Nesbitt Burns goes even further, projecting 3-per-cent growth for B.C. and a 2.5-per-cent expansion in Ontario. 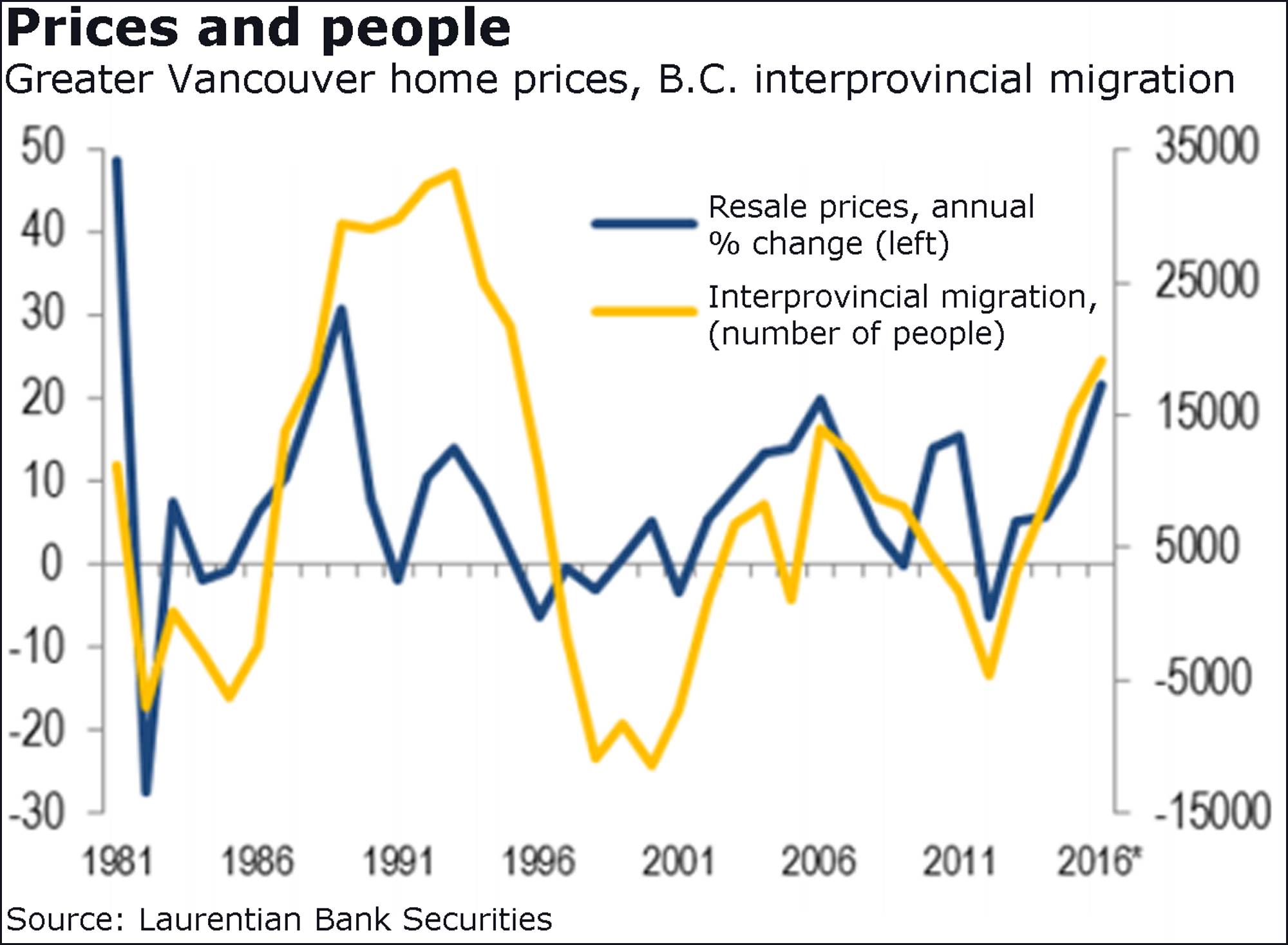 2. Driving B.C.’s growth is a flood of job-seekers from neighbouring Alberta. Said Mr. Lavoie: “This migration is principally fuelling household formation and spending. … Additional former B.C. residents, who had moved to Alberta during the last decade, are likely to come back.”

3. According to last week’s report from Statistics Canada, B.C. was the sole major province to create jobs in July, while boasting the lowest unemployment rate in the country, at 5.6 per cent. While Ontario lost a lot, it’s still up on the year. And Toronto’s labour market is fairly strong. Said Royal Bank of Canada deputy chief economist Dawn Desjardins: “Ontario saw large job losses [last month], although the accompanying decline in the labour force saw the unemployment rate hold at a cycle low of 6.4 per cent.” 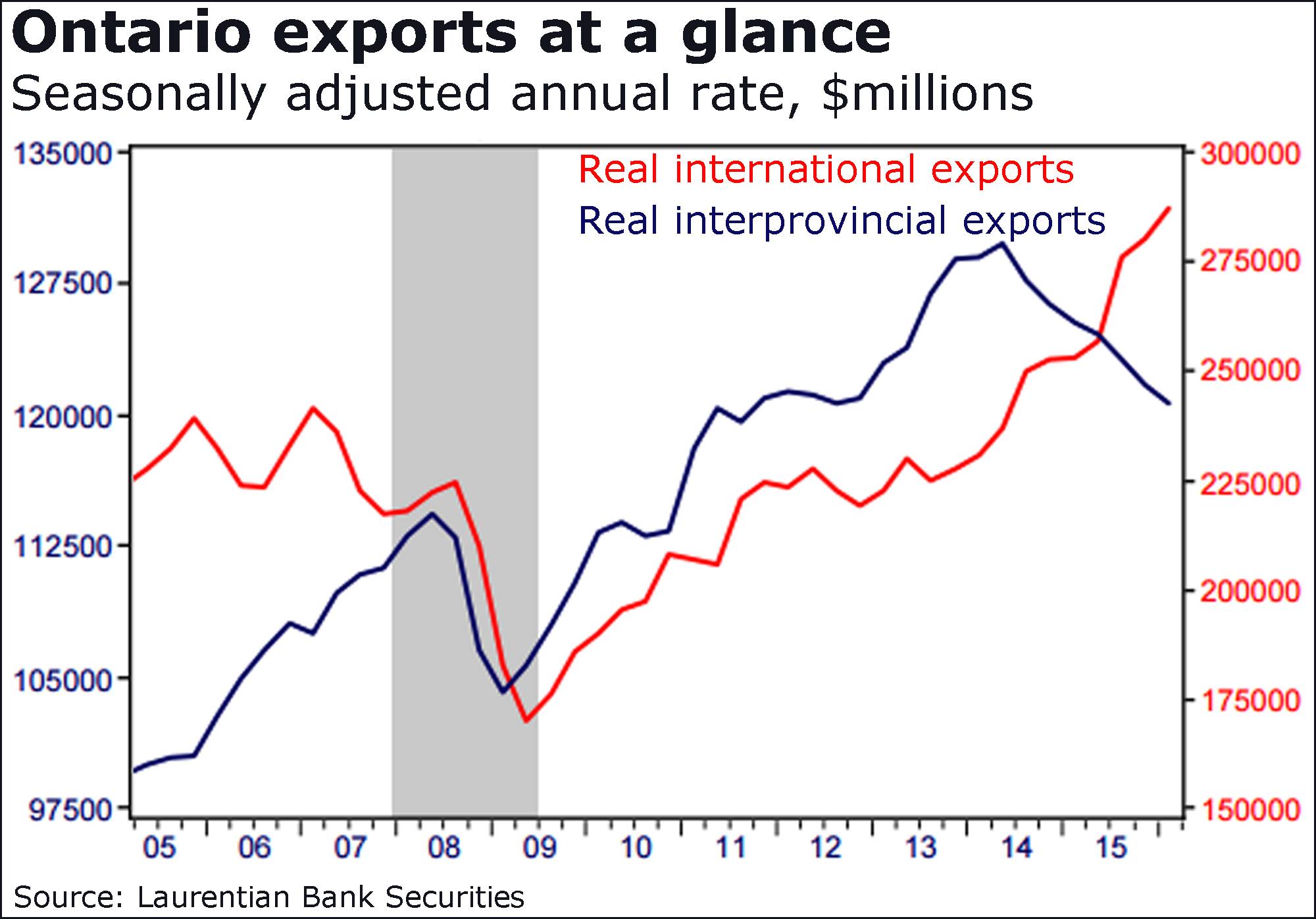 4. Setting aside the ups and downs of monthly figures, Ontario is gaining from its global exports, though being hurt by those to other provinces. Said Mr. Lavoie: “If it continues, the province of Ontario would gain export market share like in the good old days, the late 1990s.”

5. They can’t build houses fast enough in B.C., and more are needed in Ontario. In B.C., Mr. Lavoie said, home builders “are running at full capacity as housing starts are on track to slightly surpass 40,000 this year, equalling the all-time observed briefly in the early 1980s and 1990s.”

6. If you were looking for a get-rich-quick scheme, you’d have gone house-hunting in the Vancouver and Toronto areas some time ago. The benchmark price in Vancouver surged almost 33 per cent in July from a year earlier, though, BMO senior economist Sal Guatieri warned, that “should mark the high-water pace for the eye-popping run in price gains.” Hold that thought, though. More below.

7. Those who live in the Toronto area are also enjoying higher incomes, Mr. Lavoie said. Hold that thought, too.

To twist an old phrase, much of it comes down to debt and taxes.

1. The recent 15-per-cent tax on foreign buyers of Vancouver-area real estate is aimed at making homes more affordable, at the same time hopefully stopping a bubble from popping. A smart move by the province, economists say, but here’s what Mr. Lavoie sees as a risk, though he does think it’s probably worth it in the long run: “The key is also to prevent existing homeowners from seeing the value of their assets decline significantly in the event of a rapid decline in foreign investment or sudden loss of confidence in domestic buyers.”

2. What Moody’s Analytics sees as “unintended consequences.” Said economist Adam Goldin: “Because the new tax law did not grandfather in deals that were already under contract, anecdotal evidence of foreign buyers cancelling their transactions is pouring in, leaving sellers alone at the altar. What’s more, many resident buyers have pulled offers because they expect prices to decline. These cancellations have knock-on effects because many abandoned sellers then have to cancel their own purchase.”

3. Where does that foreign money go if it’s suddenly too dear in the Greater Vancouver Area? Said BMO’s Mr. Guatieri: “The risk is that other markets in Canada, notably Toronto, could heat up as international buyers look outside the GVA.” 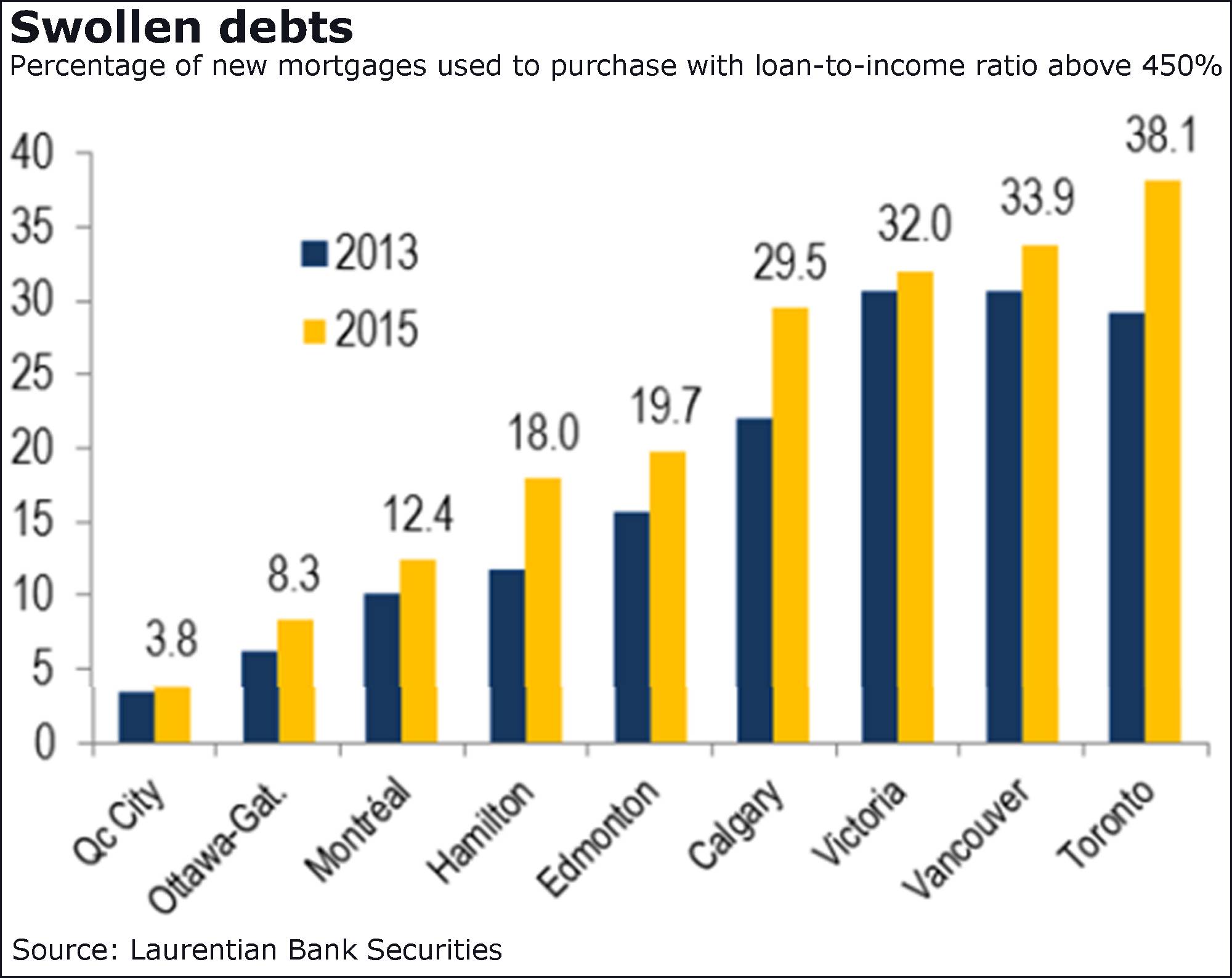 4. The latest report from the Bank of Canada, Mr. Lavoie noted, cited the fact that 30 per cent of new mortgages in the Vancouver and Victoria regions have a loan-to-income ratio that tops 450 per cent. “In the event of a negative shock, this increased riskiness could exacerbate a correction in home prices and could have harsh consequences given that a quarter of the B.C. economy depends on real estate and residential construction activities.”

5. Don’t gloat over that, Ontario. The same Bank of Canada report showed that “between 2013 and 2015, Toronto was the urban centre in the country that saw the largest spike in the share of new borrowers with a loan-to-income ratio of 450 per cent (from 29 per cent to 38 per cent),” Mr. Lavoie said.

6. Wait, there’s more. Said the Laurentian economist: “Households are not rebuilding savings despite robust wage gains. In contrast, Ontarians have been overspending for quite some time, leading the savings rate to hit a nearly 10-year low of 1 per cent in the [first quarter]. It appears that a growing number of households are depleting their savings in order to become homeowners.”

Valeant slumped to a loss of $302-million, compared to $53-million a year earlier, while revenue tumbled 11 per cent to $2.4-billion.

“We continue to make progress towards stabilizing the organization,” chief executive officer Joseph Papa said in unveiling the quarterly results.

“Although it will take time to implement and execute our turnaround plan, I am confident that we show progress in the coming quarters.”