What Trump could mean

When we’re talking about both Donald Trump and the Canadian dollar, it’s best to make clear what we mean by loonie: In this case, it’s the latter.

Royal Bank of Canada says it’s hard to forecast how currencies would react to a Trump presidency. But the bottom line, says RBC senior currency strategist Elsa Lignos, is that the Canadian dollar could suffer.

“It is not an easy question to answer, not least because Trump’s policy platform is still being defined, there is skepticism over how much would make it through Congress, and some of the proposed ideas would have conflicting currency effects,” Ms. Lignos said in a new report.

The obvious “Trump trade” would involve the U.S. dollar Mexico’s peso, she said, while other currencies are “less clear cut.” But here are her points on the loonie, which is now at about 77 cents U.S.:

Mr. Trump has said he wants TransCanada Corp.’s Keystone XL pipeline guilt but also wants the U.S. to share in the profits.

The Republican presidential candidate also wants to renegotiate the North America free-trade agreement and pull out of the TPP deal.

“While neither his ‘Economic Vision’ nor his speech on economic policy earlier this week mentioned Canada explicitly (beyond calling for TransCanada to renew its application for a permit), his criticism of NAFTA in the context of Mexico could be translated to Canada,” Ms. Lignos said.

“On balance, we think a fear of protectionism coupled with risk aversion should see USD/CAD trade higher,” she added, referring to the symbols for the U.S. and Canadian dollar, and which means the loonie would sink.

There may be no earthly explanation for it, but there’s no denying what the fever lines show: There’s a correlation between food and gold prices that spans three decades. 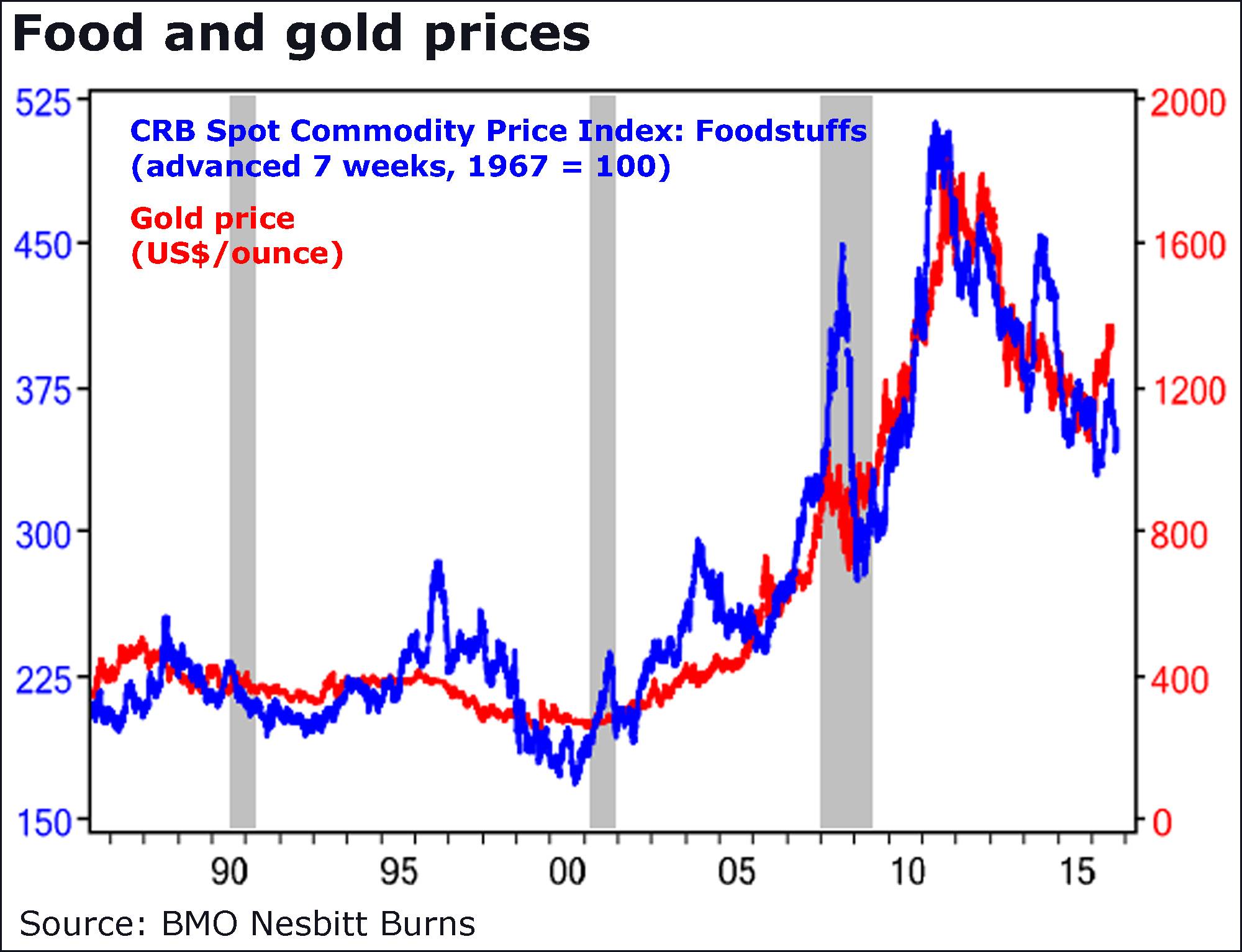 This chart began “as a bit of a lark, pointing out a spurious relationship between gold and food prices,” said Bank of Montreal chief economist Douglas Porter.

“But, then we noticed the strength of the fit over 30 years,” added Mr. Porter, who tracked gold against a Commodity Research Bureau index of 10 items, including pigs, cows, corn, wheat, butter and lard.

“Then, we also noticed that this basket of raw foods has tended to lead gold prices by about seven weeks. Food prices can be volatile, and there have certainly been head fakes over the years. But, the big trends line up well.”

Mr. Porter questioned in a research note how the price of gold could be related to the cost of lard, for example.

“It turns out sugar has an especially close fit with gold, for reasons that are beyond obvious explanation,” he said.

“But the overall food basket has the best fit, suggesting it’s something more macro driving the correlations.”

Gold is a commodity, of course, and several things, such as inflation and the U.S. dollar, can affect commodities.

“Yet, the same can be said for oil, and oil has only a so-so-fit with gold prices.”

And gold bugs take note: “The food basket has ticked down in the past seven weeks.”