About the house price boom

When we think of housing market woes, we of course remember the U.S. meltdown that started it all.

But it doesn’t have to be that way, Canadian Imperial Bank of Commerce says in a new report, if the “policy mix” is done right.

The report from chief economist Avery Shenfeld comes amid fears over the Vancouver and Toronto markets, and new measures by the B.C. government to dissuade foreign buyers.

Many observers, including the Bank of Canada, are fretting over house prices in those areas, and the swelling debt levels that accompany the surge.

And there are suggestions among some of the impact on the economy from putting stronger measures in place.

“Interest rate hikes or much tougher mortgage policies could put a damper on house prices, but at the expense of economic growth,” Mr. Shenfeld said, citing concerns that consumers will cut back spending and that we may face a crash.

“But there are ways that governments could tame regional house price inflation that would be bullish for GDP ahead,” he said.

There will be a hit to economic growth if government efforts focus on holding down demand in the housing market. The B.C. government’s new 15-per-cent tax on foreign buyers, for example, could hurt agent and lawyer fees, mortgage services and home renos.

“But while it won’t be as quick a solution, enhancing the supply of new housing can also cushion further price appreciation and generate additional GDP growth in the process,” Mr. Shenfeld said in his report titled “This needn’t end badly.”

Among the solutions for Toronto are making more land available, speeding up approvals for new construction, and improving transit.

“Approving more high-rise construction would help contain condo prices and apartment rents, although that would eat into land for singles,” Mr. Shenfeld said.

“Multiple-unit home building could also be enhanced by a greater policy focus on social housing, where the needs might now be greater, given the reduced affordability of other housing,” he added.

“The supply of such housing would also help address one of the downsides of rising house prices - the diminished ability of businesses to find workers that can afford to live within commuting distance.”

Amid volatile market conditions, Canada Pension Plan Investment Board is diversifying its investments under leadership of a new chief executive officer, The Globe and Mail’s Jacqueline Nelson reports.

CPPIB, the largest pension fund in the country and manager of the Canada Pension Plan’s portfolio, posted net investment gains of 1.45 per cent in its first fiscal quarter of 2017, which marks the three months ended June 30.

During that period, total assets reached $287.3-billion compared to $268.6-billion at the same time last year.

Popcorn is still selling well at the theatre. The movies themselves, not so much.

But concession revenues per person rose 4.4 per cent to $5.74, so we’re still eating popcorn and sipping pop.

The revenue drop was largely because of “decreased attendance as a result of weaker film product during the period,” said chief executive officer Ellis Jacob.

“The prior year period was a tough comparator with its top three films ranked in the top seven highest grossing films of all time.”

Governor Stephen Poloz and his Bank of Canada colleagues have a “major exports headache” that could lead to another interest rate cut this year, a big global bank says.

The Nomura economics department now puts the probability of a cut in the benchmark rate at about 40 per cent, which would likely rise further should the export situation worsen.

“The continued underperformance of Canadian exports is putting in doubt the BoC’s forecast that growth will improve in the second half of 2016,” Nomura’s Charles St-Arnaud said.

“Part of that underperformance can be tracked back to weak U.S. imports performance and Canada’s loss of competitiveness,” he added in a report titled, “The BoC’s major exports headache.”

“We believe this underperformance has increased the likelihood that the BoC will have to cut rates later this year.”

But, as The Globe and Mail’s David Parkinson writes, the country’s trade deficit now stands at a record $3.6-billion after a small gain in exports in June that was entirely tied to prices, with volumes actually down. 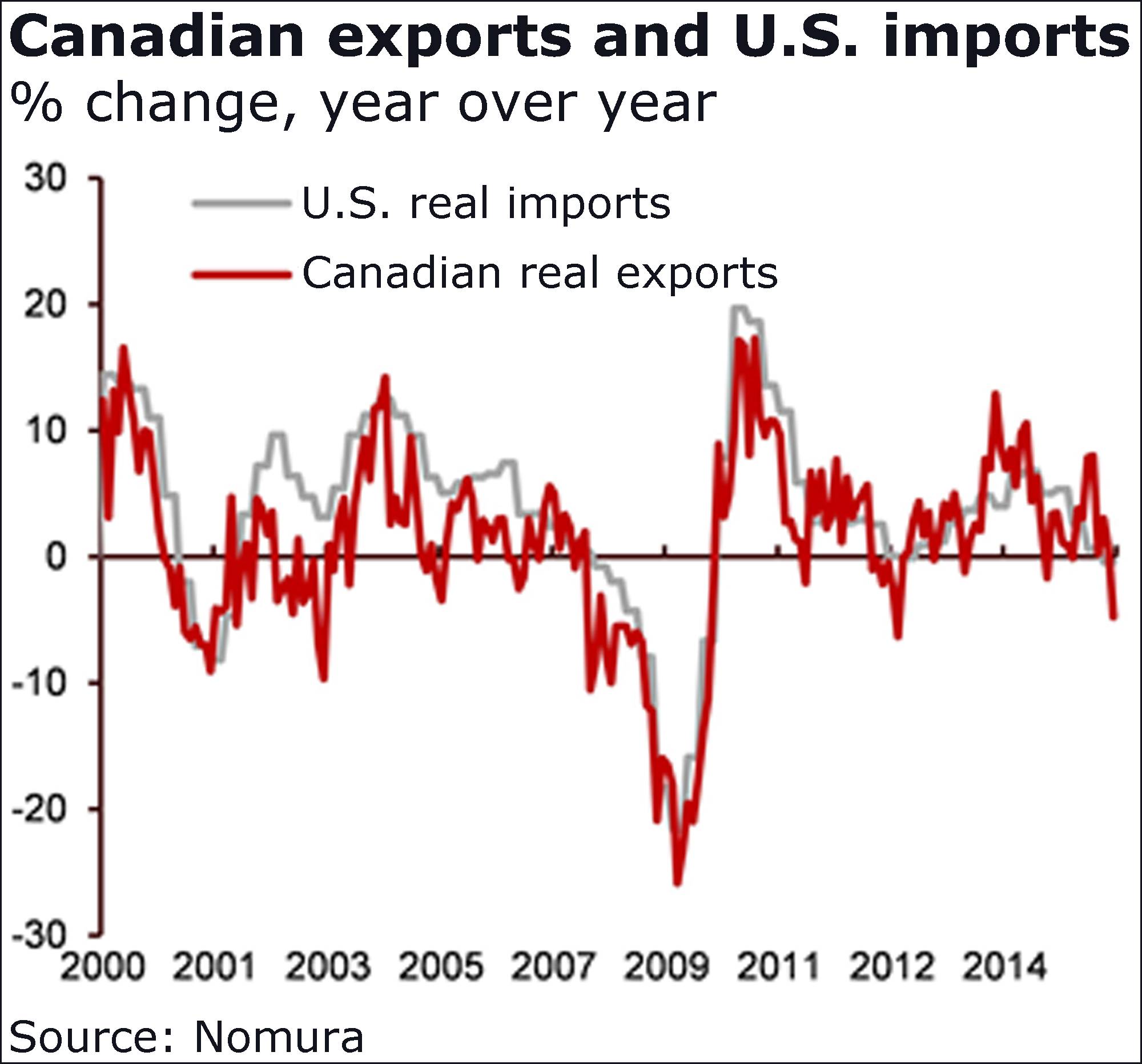 In fact, non-energy exports have tumbled in four of the past five months, and are still well below the levels of last December.

“This underperformance is likely a major source of concern for the BoC and also complicates its work, as it could mean that the economy continues to underperform in coming quarters,” Mr. St-Arnaud said.

Nomura’s economics group forecasts a rise in U.S. imports in the second half of 2016, which would help Canada, but “we maintain our view that the sensitivity of Canadian exports to U.S. demand has diminished in the past decade.”

Other economists agree that the Bank of Canada could yet cut its benchmark from the current 0.5 per cent, though most don’t see that actually happening.

“While we don’t yet consider a rate cut by the BoC to be probable, it is quite possible,” BMO Nesbitt Burns chief economist Douglas Porter said.