Toronto buyers are flocking to the condo market as house prices soar ever more out of reach.

The latest numbers from the Toronto Real Estate Board show home sales climbed 11.8 per cent in January from a year earlier, to 4,640, led by a surge in condos.

Prices also soared as Toronto remains the last real focus of concern amid the Vancouver slump: The average price rose 22.3 per cent to $770,745, while the MLS home price index, which is seen as a better measure, rose 21.8 per cent from a year earlier.

Condo units, in particular, flew off the shelves, with sales up 26.7 per cent across the Greater Toronto Area, a far faster pace than other home types, though price gains in that category lagged the rest at 14.5 per cent.

Which speaks volumes about what’s happening in Canada’s biggest city.

“In a nutshell, these are some of the tightest resale market conditions we’ve seen in 36 years of history,” said BMO Nesbitt Burns senior economist Robert Kavcic.

“The mortgage rule changes implemented late last year are not having (and are probably not going to have) the impact many were expecting in a market this strong,” he added, referring to new federal tax and mortgage regulations.

“See Vancouver for a policy move that actually worked to slow price growth.”

Sales of detached homes rose 7.8 per cent, while the average price for those houses surged 26.3 per cent, the Toronto Real Estate Board said.

“Buyers priced out of the low-rise segment, a surge in rental demand, and increased attention from investors are placing heavy downward pressure on condo inventories,” Shaun Hildebrand, the senior vice-president at real estate consultant Urbanation, said in a report this week.

The Toronto Real Estate Board noted the sharp drop in new listings, which fell almost 18 per cent in January from a year earlier, and, more importantly, active listings, which plunged almost 50 per cent.

“That statistic, on its own, tells us that there is a serious supply problem in the GTA – a problem that will continue to play itself out in 2017,” said Jason Mercer, the group’s director of market analysis.

“The result will be very strong price growth for all home types again this year.” 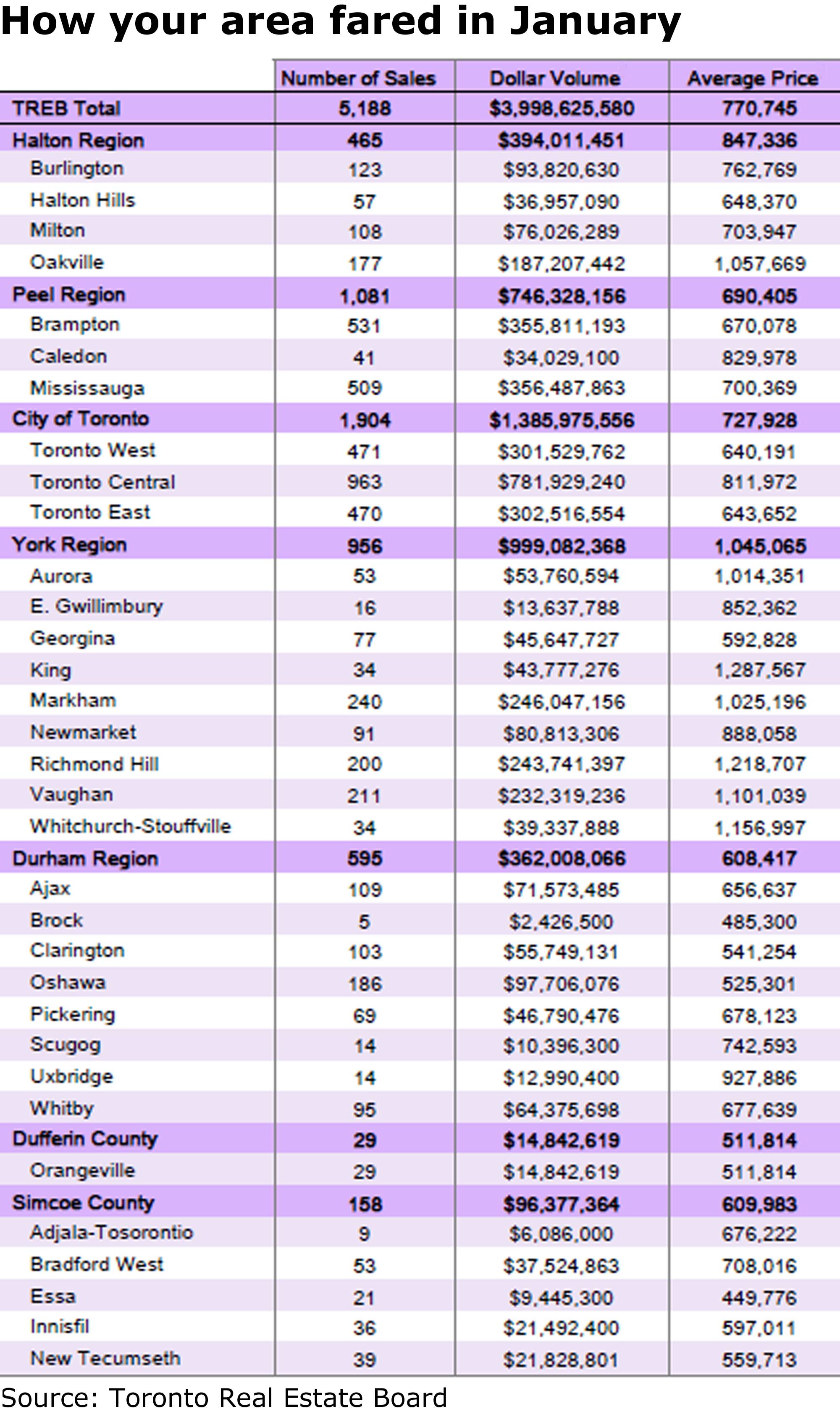 President Donald Trump is poised to unmake the Obama era bank rules brought in after the financial crisis.

And, as analyst Jasper Lawyer of London Capital Group put it in a research notes, the “Dodd-Frank review has banks ready to party.”

Mr. Trump is expected to order a review of the Dodd-Frank Act regulations later in the day, among other things, including the fiduciary rule.

His actions would undo much of the regulatory regime put in place after the 2008 meltdown.

“The changes to Dodd-Frank are likely to be small to begin with, but Trump is shifting the direction of travel from more regulation to less regulation,” said Mr. Lawler, senior market analyst at London Capital Group.

“U.S. stocks have turned lower in the last couple of weeks as Trump focused more on trade tariffs for the auto sector and penalizing health care companies over drug prices,” he added.

“Trump turning his attention to deregulation could be just the boost Wall Street needs to send the Dow back above the 20,000 mark.”

Canada’s iconic Hudson’s Bay is eyeing an equally iconic, though nowhere near as old, American retailer.

HBC has made overtures to Macy’s aimed at a potential takeover, The Wall Street Journal reports.

HBC also holds some big brands under its banner, including Saks Fifth Avenue and Lord & Taylor.