For the markets, there are hot wars and currency cold wars.

First and foremost, of course, are the mounting geopolitical issues, some of them horrific and others threatening. From Syria and Russia to North Korea and Afghanistan.

Then there are global economic issues. From America and Asia to the Middle East and Europe.

The human threat, of course, is all too real: Scores killed in a chemical attack, missiles fired, the “mother of all bombs” dropped, and temperatures rising.

But how big are the economic threats?

“Geopolitical concerns have boosted demand for safe-haven assets in the past week, and have pushed up measures of implied volatility in equity markets,” said Andrew Kenningham, chief global economist at Capital Economics in London.

“But experience suggests that geopolitical events rarely have long-lasting economic consequences and the current tensions will probably be no exception.”

Investors have moved into traditional safe-haven shelters such as gold and the yen, Capital Economics noted recently, but the jump in prices has not been all that sharp.

“We think investors are right not to react too strongly to these geopolitical tensions,” Mr. Kenningham said.

“Clearly, events in the Middle East (and the White House) are unpredictable, but the U.S.’s military strike on Syria, its disagreement with Russia, and its brinkmanship with North Korea are nothing new,” he added.

“And on previous occasions, the global economic fallout from such tensions has been negligible.”

Christopher Louney, a Royal Bank of Canada commodity strategist in New York, believes the run-up in gold prices may be overdone, pushed up by President Donald Trump’s suggestion that the U.S. dollar is too strong, coupled with the global tensions.

“In our view, gold has gotten ahead of itself in price terms (unless these risks materialize into persistent risk-off events),” Mr. Louney said.

“Over all, while gold is still a good risk overlay in our view, we emphatically believe that current levels do not represent an attractive entry point,” he added.

The “most plausible channel of contagion,” said Mr. Kenningham, is through oil markets, depending on what happens in Iran.

Not only has Iran warned the U.S. against more air strikes, other observers have also suggested that Iran’s presidential election could play a role, should a harder line be taken, putting the nuclear pact at risk and threatening renewed sanctions.

“It is, for example, possible that the U.S. could call for the re-imposition of sanctions on Iran; as Iran now produces 3.7 million barrels per day (bpd), or nearly 4 per cent of global supply, eliminating its production would cause oil prices to jump,” Mr. Kenningham said.

But even there, any impact on prices could be small.

“The last set of sanctions against Iran was supported by the European Union and China, but they reduced its output by only 0.8 million bpd in 2012,” Mr. Kenningham said.

“This time around other governments may be less willing to co-operate with the U.S. And in the current circumstances, OPEC would willingly make up for any reduction in output from Iran so there may be little impact on global supply.”

As for stocks, geopolitical concerns will play into markets, as always. But so will many other factors, from corporate earnings to U.S. fiscal and economic policy to signals from the Federal Reserve.

As Bank of Montreal senior economist Robert Kavcic put it, the U.S. expansion and the bull market in stocks are looking somewhat long in the tooth. But does that mean the end is near?

“The equity bull market is getting older, the U.S. economy is returning to full employment and Federal Reserve policy is shifting again,” he said.

“The expansion has many hallmarks of being a bit over the hill, but we’d hesitate to dust off the very late-cycle playbook quite yet,” he added.

“Just how aggressive the Fed shifts policy this year and next should be a key factor to watch.”

Mr. Trump sent ripples through currency markets last week with his assertion that the U.S. dollar is too strong. He has said that before, as has Treasury Secretary Steven Mnuchin.

But more than just the American president are playing the currency game.

First, Bank of Nova Scotia foreign exchange strategists Shaun Osborne and Eric Theoret believe such “verbal intervention” by Mr. Trump can have only a limited, short-term impact on the currency scotia dxy chart “It’s an axiom of the market that it is easier to stop a currency from rising than it is to stop one from falling but inconsistent messaging on [foreign exchange] policy, and the fact that that the USD’s recent gains appear to be well supported by fundamentals, suggest that President Trump’s occasional comments on the USD may not have a significant impact on the USD’s broader value,” they said in a report, referring to the U.S. currency by its symbol. 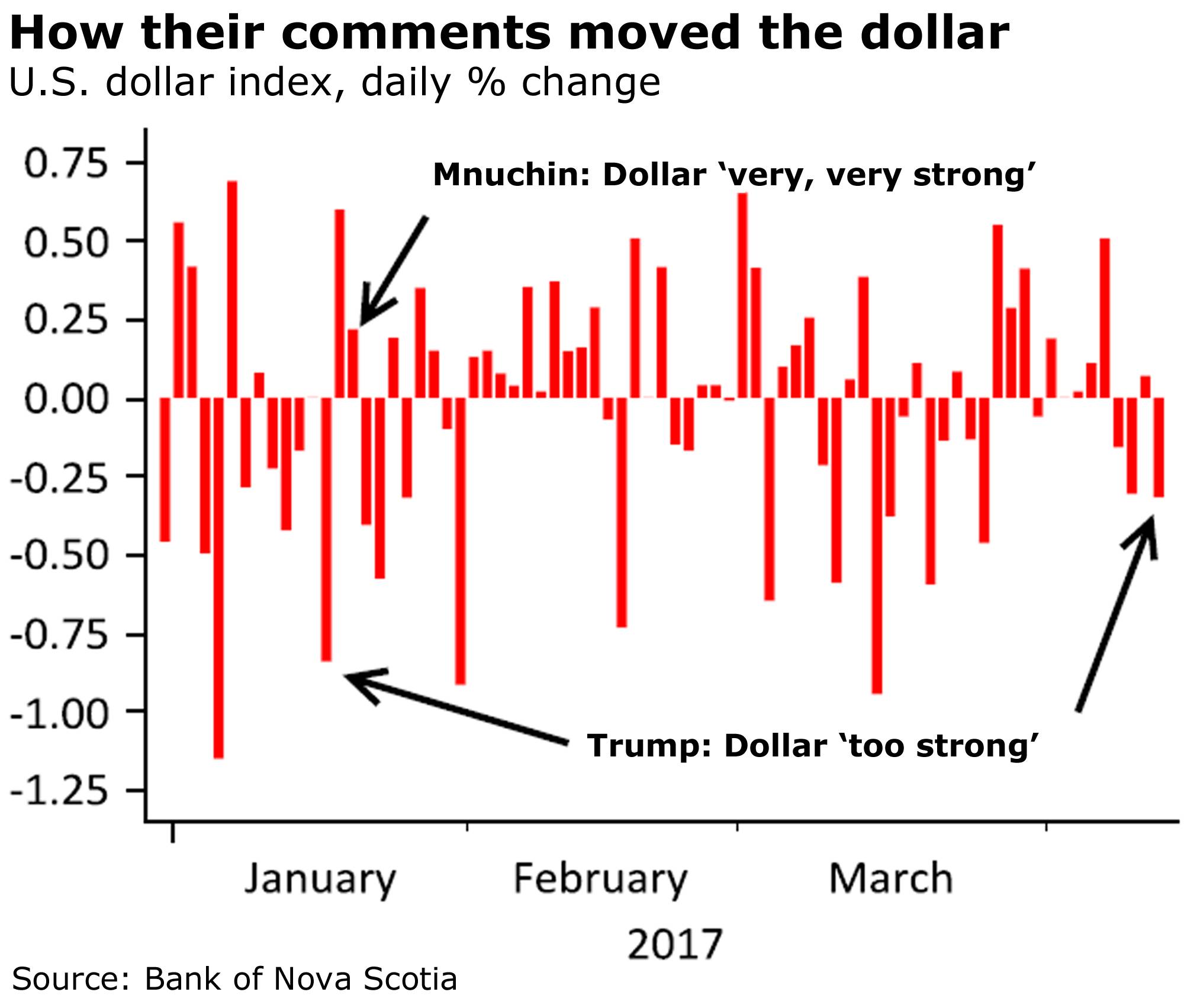 As The Globe and Mail’s Ian McGugan also writes, you can’t keep a good dollar down when the economy and central bank policy rates are pointing up.

Jonathan Loynes, chief economist at Capital Economics, believes Mr. Trump faces challenges in trying to keep a lid on the greenback. Though the economies of other countries are perking up, which could prompt a rise in their currencies.

The euro is one such example. And given how the U.S. administration has complained about Germany using a weak euro to its advantage, that could make a difference.

As well, Mr. Loynes noted, markets are now questioning Mr. Trump’s ability to push through other economy-boosting measures given his setback on health care reform.

“But there are limits to the extent to which Trump can fight the economic cycle,” Mr. Loynes said.

“While U.S. growth may have underperformed in Q1, the recovery is still much more advanced than those of most of the U.S.’ competitors and the upward pressure on underlying inflation pressures is correspondingly stronger,” he added.

“That, in turn, will keep the Fed on a path of steady policy tightening, while other central banks remain under little pressure to follow soon.”

Among the latter are the Bank of Canada, which changed its tone last week but remains extremely cautious.

Canada’s central bank upgraded its 2017 economic growth forecast, to 2.6 per cent from an earlier projection of 2.1, but still broadcast caution and uncertainty.

And before that, some observers had suggested its dimmer view in the face of stronger indicators was, among other things, meant to help keep the loonie down to give exports a push.

There’s not a lot going on given that Europe is shut down.

Tokyo’s Nikkei gained 0.1 per cent, though Hong Kong’s Hang Seng lost 0.2 per cent, and the Shanghai composite 0.7 per cent.

New York futures are down, and the Canadian dollar is above 75 cents U.S.

Playing into overseas markets is the latest official reading of economic growth in China, which inched up to 6.9 per cent in the first quarter from 6.8 per cent in the previous three-month period.

“As usual, these figures will be met with skepticism since the continue the trend of implausibly stable official GDP growth in recent years,” said Julian Evans-Pritchard, the China economist at Capital Economics.

“As it happens, we actually that growth did hold fairly steady in Q1 and that China’s economy is currently expanding close to the official rate.”

What to watch for this week: ‘Bubble much?’

Mr. Morneau chose to take no new federal measures in his latest budget, while Mr. Tory and Mr. Sousa, who will have his own budget soon, have mused about various approaches.

And setting the stage for that afternoon meeting will be the latest look at national prices from the Canadian Real Estate Association.

We’ve already seen local real estate board reports from several cities, so we know, for example, that Vancouver sales slumped yet again in March, though “that market appears to have bottomed,” said BMO senior economist Benjamin Reitzes.

We also know that the Toronto market surged again, with the MLS home price index up by almost 29 per cent and the Teranet-National Bank reading also up sharply.

On a national basis, Mr. Reitzes expects the CREA report to show sales up 3.5 per cent in March from a year earlier, average prices up 6 per cent, and the MLS home price index, which is seen as a better measure, up by a record 16.6 per cent.

Also on the calendar:

Netflix Inc. and a handful of other American companies start the opening credits for a blockbuster week of quarterly earnings reports.

We’ll see if Mr. Trump has more to say about the yen as Japan reports March trade numbers. Capital Economics expects to see that the surplus narrowed, though that’s related to the timing of the Chinese New Year.

“Nonetheless, this should still point to another boost from net exports to GDP last quarter,” it said.

At the same time, finance ministers and central bankers from the G20 nations are scheduled to start a two-day meeting in Washington, which could be interesting given the angst over Mr. Trump’s trade threats.

Look at your latest pay raise and see how it compares to Statistics Canada’s measure of inflation last month.

Economists expect to see consumer prices climbed 0.4 or 0.5 per cent on a monthly basis, and the aforementioned 1.8 or 1.9 per cent annually.

“The crude rebound looks to be back on track, and food prices should switch from a negative to a positive for inflation in the months ahead,” said Nick Exarhos of CIBC World Markets.

And following on the G20, the World Bank and International Monetary Fund launch three days of spring meetings.

As is generally the case on a Friday, earnings reports slow down, though we’ll still see the latest from General Electric Co., Honeywell International Inc. and a few others.