The OECD has issued a long to-do list to Canada’s new government and the provinces: Cool down house prices, act as a group on climate change and cover essential drugs in public health plans.

The Organization for Economic Co-operation and Development also forecast lean times in today’s report, though it did project Canada will rebound from the oil shock.

Of note in the report was a warning that Toronto’s housing market risks a sharp fall, though it also rang alarms over Vancouver’s inflated prices.

Echoing calls by other groups, the OECD urged Prime Minister Justin Trudeau’s young Liberal government to hose down those markets.

“Given the supportive monetary stance, high household debt and strong price increases in some markets (single dwellings in Toronto and Vancouver) that are already expensive relative to fundamentals, further macro-prudential tightening on mortgage lending in these markets, such as maximum loan-to-value or debt-servicing ratios, should be implemented to ensure financial stability,” it said. 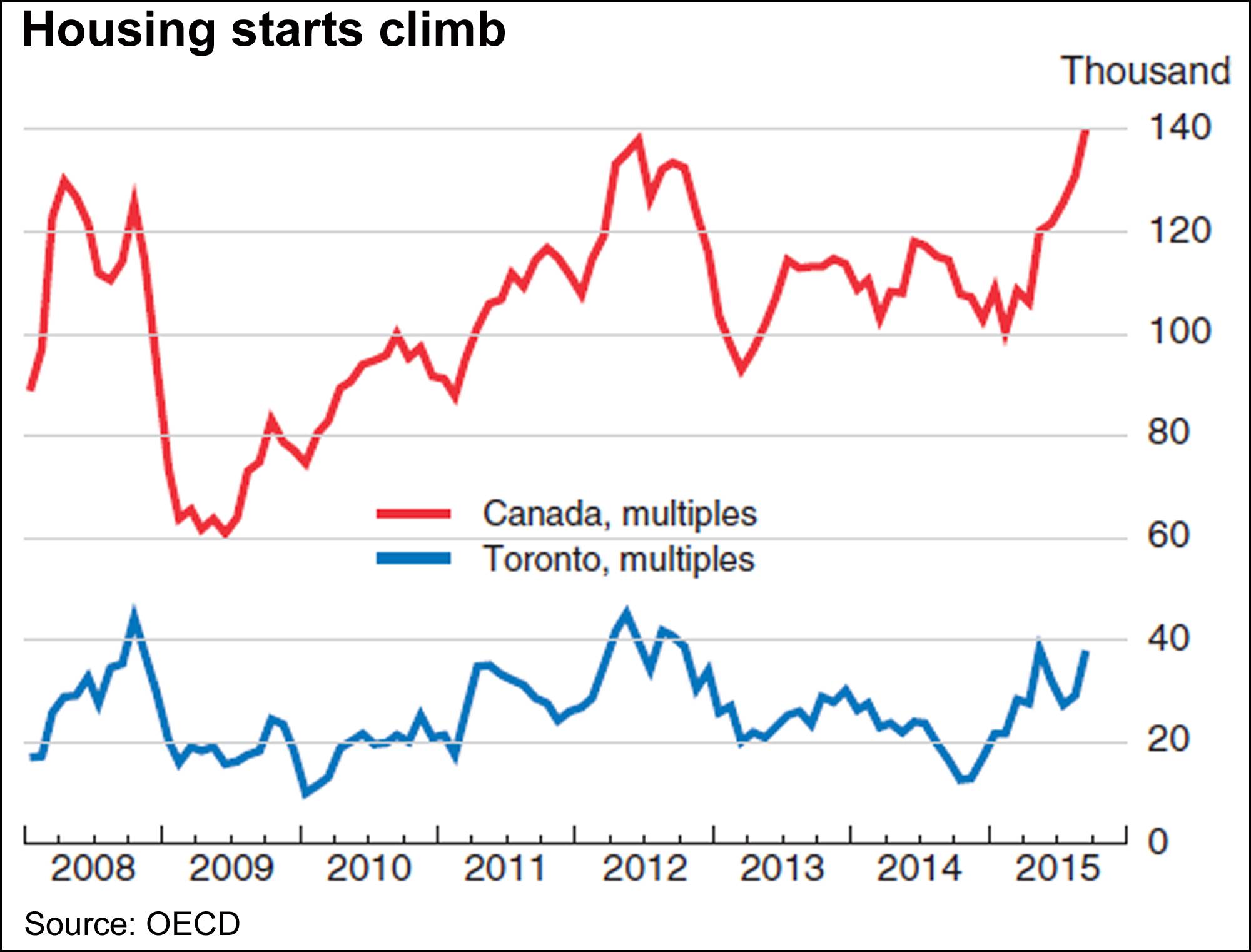 The warning over Toronto was particularly harsh as the OECD cited, among other things, condo and apartment construction.

“At the national level, housing starts are running at the higher end of demographic requirements and housing investment is robust,” the group said.

“In Ontario, and especially Toronto, economic activity has been relatively buoyant and demand by foreigners has been boosted by the falling Canadian dollar. That said, newly completed but unoccupied housing units have soared in Toronto, increasing the risk of a sharp market correction.”

Other observers have dismissed such fears, though some are keeping a wary eye on residential construction.

CIBC World Markets responded to the OECD’s Toronto warning today by citing a previous study by the bank that suggests “the most widely used data on unabsorbed units overstates and misrepresents the level of standing condo inventory.”

Today, Canada Mortgage and Housing Corp.’s monthly reading of construction showed starts falling to an annual pace of 198,065 in October from 231,304 a month earlier, as multiples fell.

But the trend, a six-month moving average, showed a rise to 206,089, largely because of new condo and rental units.

And as BMO Nesbitt Burns senior economist Benjamin Reitzes pointed out earlier, the “demographic demand is around 190,000 units per year.”

In Toronto alone, the annual pace slipped to 38,722 units from 58,016, but, again, the trend was still running at September’s pace.

“Tight conditions in the resale market for single-detached homes have caused demand to spill over into the new home market,” said Dana Senagama, CMHC’s principal market analyst for the Toronto area.

“Pre-construction condo sales, which began increasing in mid-2013, are also converting to starts.”

There was more on the OECD’s mind than just overvalued housing markets, including climate change.

“The four largest provinces have adopted, or are in the process of adopting, price instruments – cap and trade or a carbon tax,” it said, noting Canada is not “on track” to meet its targets.

“To reduce abatement costs, the other provinces and territories should follow suit. However, emissions reductions would be less costly if provinces co-ordinated or the federal government took the lead on a national greenhouse gas abatement policy.”

The OECD had several other suggestions, including expanded coverage of essential drugs in health plans.

Big players in the oil patch are shaking up the royalty business again.

Essar Steel Algoma Inc., battered by the collapse in North American steel prices, has applied for protection from creditors, marking the third trip through the Companies’ Creditors Arrangement Act for the economic engine of Sault Ste. Marie, Ont.

The steel maker, which has been operating in the city since 1901, went through court-supervised restructurings in 1991 and 2001 before being purchased by Essar Steel Holdings Ltd. of India in 2007 during the global steel consolidation that led to the buyout of all major Canadian steel makers, The Globe and Mail’s Greg Keenan reports.

As for economic readings, Friday brings the latest on U.S. retail sales for October, which are believed to have jumped by between 0.3 per cent and 0.5 per cent.

“Given the recent struggles in manufacturing and capital goods orders, the U.S. economy is becoming increasingly reliant on consumer spending to drive growth,” said Andrew Grantham of CIBC World Markets.

“A decent lift in retail sales during October will leave the consumer on track to match the 3-per-cent-plus growth rates of Q2 and Q3.”

Friday also brings a look at how the economy of the euro zone performed in the third quarter, which Royal Bank of Canada economists expect will show an expansion of 0.4 per cent from the previous three-month period.

All eyes will be on the heavyweight economies of Germany and France.