Is the boom sputtering?

Some economists suggest Canada’s housing boom may be starting to sputter, and the latest report from the real estate industry highlights that for some regions.

But hold that thought where prices are concerned.

First, the boom isn’t a cross-country phenomenon, but rather one that’s playing out in Vancouver, Toronto and their surrounding regions.

Second, what happens in one city doesn’t necessarily signal what could happen in another, particularly given the dynamics at play.

And third, it all takes time, according to Toronto-Dominion Bank economist Diana Petramala. So not so fast.

Ms. Petramala believes Vancouver is poised for an all-out price decline, but it will be a mild drop and take more than two years before all is said and done, while Toronto price gains simply decelerate.

As The Globe and Mail’s Tamsin McMahon reports, the latest reading of the Teranet-National Bank home price index showed property values surging almost 25 per cent in Vancouver and almost 13.5 per cent in Toronto in July from a year earlier. 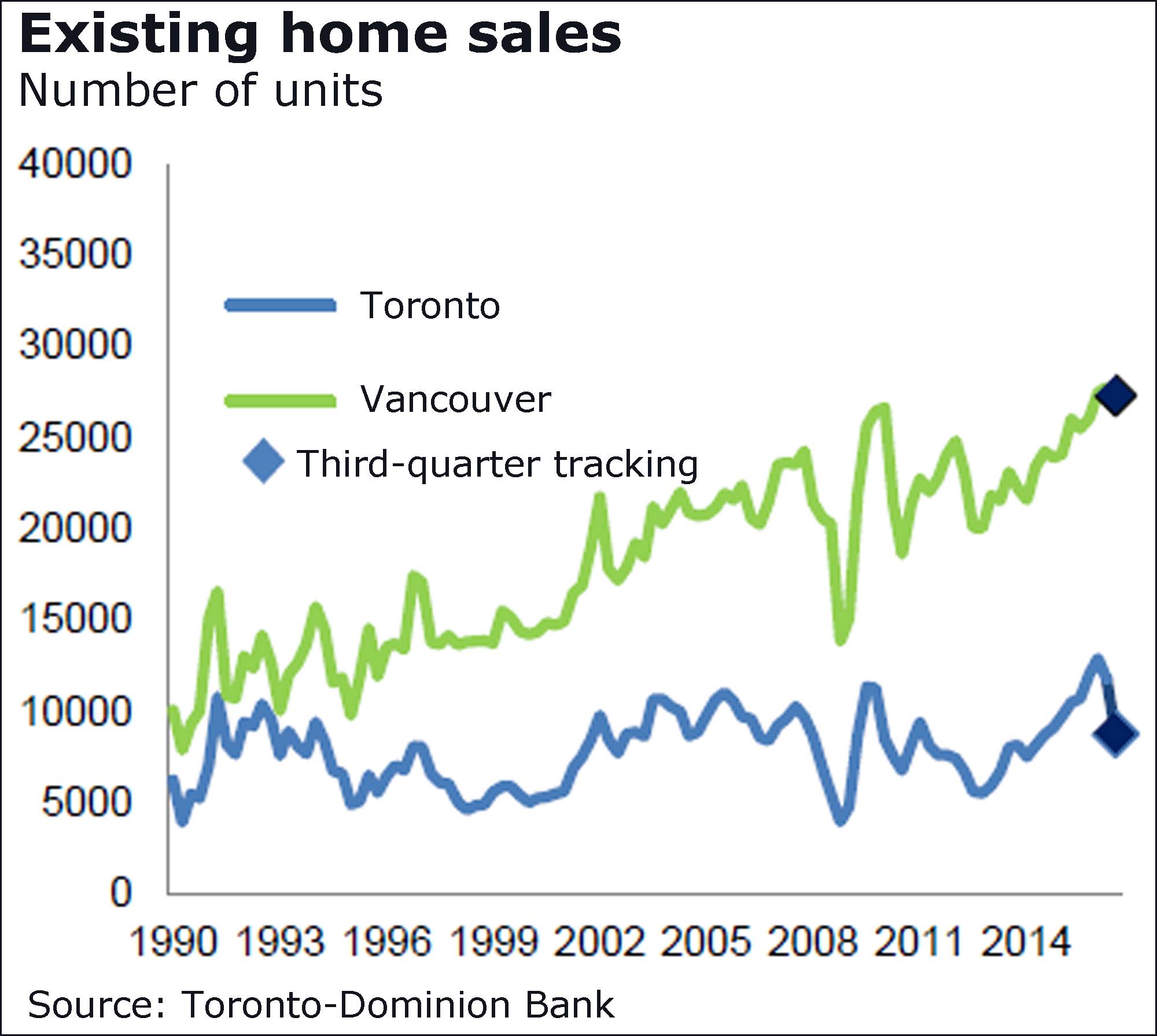 But statistics from local real estate boards over the past several weeks “suggest that some underlying tides are beginning to shift,” Ms. Petramala said in a recent report that looks at prices and sales.

Sales in Vancouver, for example, tumbled 19 per cent in July from a year earlier, and are likely to sink further given the province’s new 15-per-cent tax on foreign buyers of real estate in the Vancouver area.

“Over all, we believe that the Vancouver housing market has started what we expect to be a multi-year, modest price correction which could see prices fall by almost 10 per cent through the end of 2018.”

Toronto is a far different story at this point, with July sales at a record amid low mortgage rates and other factors.

Not only that, some economists believe the new tax in Vancouver could push foreign buyers to Toronto and other cities.

“As such, home prices are expected to accelerate through the rest of the year,” Ms. Petramala said of Toronto.

“TD Economics does see the potential for higher mortgage rates and/or tighter regulation to take some steam out of housing activity next year,” she added.

“However, the Toronto market is less inflated than Vancouver and we expect average home price growth in Toronto to decelerate to be more in line with inflation and not contract outright.” 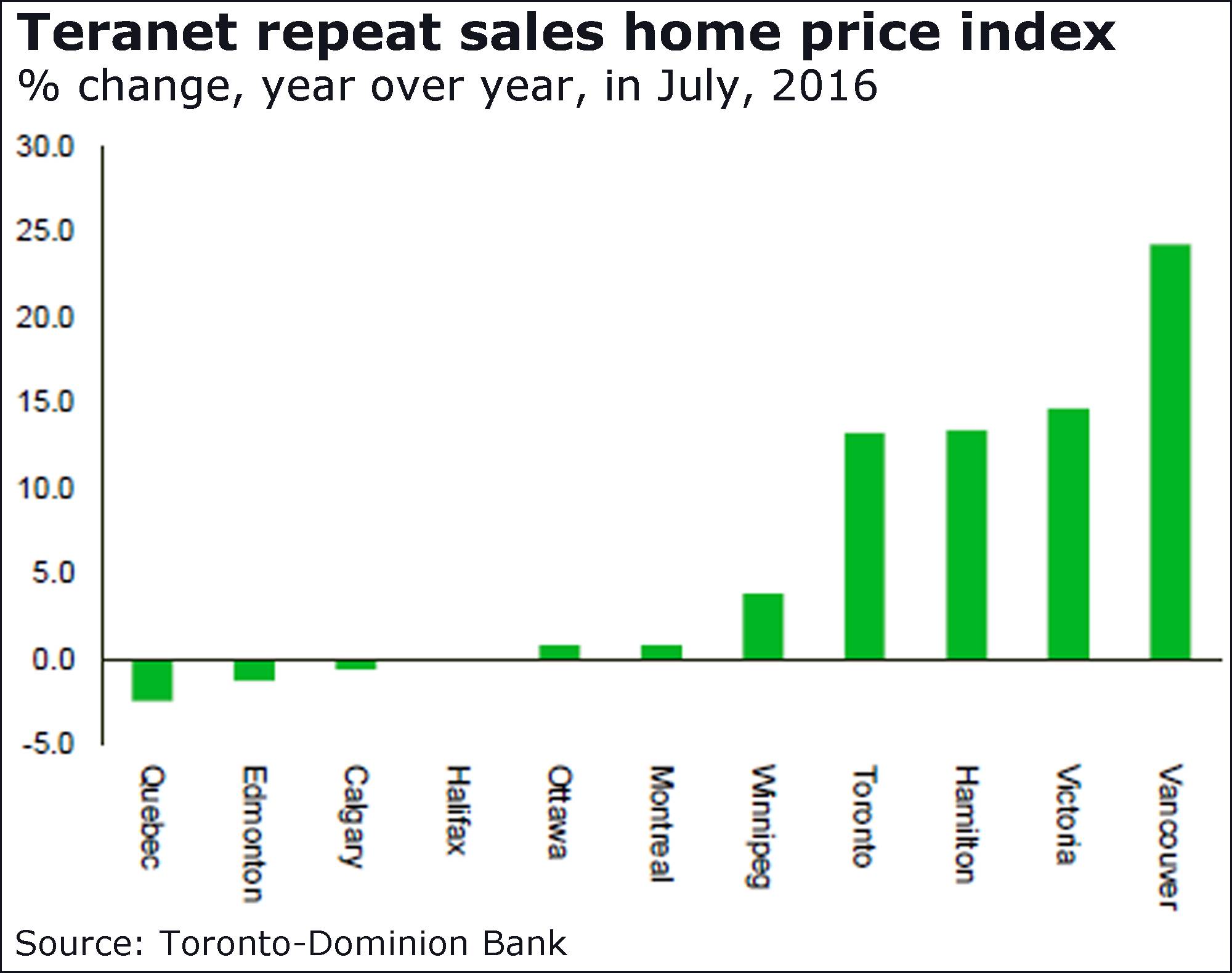 Outside of the Vancouver and Toronto regions, most other markets are little changed or declining, and low interest rates “will continue to be quite stimulative” despite rising unemployment.

Indeed, Calgary and Edmonton aren’t looking to be as bad as what observers feared amid the oil crash.

The latest numbers from the Canadian Real Estate Association, released Monday, showed national home sales slipping 1.3 per cent in July from June, and 2.9 per cent from a year earlier. While the Vancouver drop accounts for a lot, that’s not the whole story.

The year-over-year decline was the first since early last year, and the steepest since mid-2013, the real estate association said.

“In line with softening activity in the Lower Mainland, [year-over-year] increases have been losing momentum since February, 2016,” it added in releasing the July numbers.

“Sales were down from levels one year earlier in about 60 per cent of all Canadian markets, led by Greater Vancouver, the Fraser Valley, Calgary and Edmonton.

The national average sale price rose almost 10 per cent in July from a year earlier, and just 7 per cent if you strip out the Toronto and Vancouver areas.

So in a report titled “A Penny and some thoughts,” BMO senior economist Robert Kavcic has this to say about the world’s exchanges, as of Friday:

U.S. stocks are wining “gold,” with the S&P 500, Dow Jones industrial average and Nasdaq each touching new highs last week: “After a tepid first half that saw real GDP grow just 1 per cent [at an annual rate], the economy looks like it will rebound with some vigour in the second half.”

“Silver (in comeback fashion)” goes to Britain, where London’s FTSE 100 has gained 11 per cent so far this year, also setting records: “The U.K. economist was thrown a big wrinkle with the Brexit vote, and indeed we’re forecasting no growth through the second half of the year. Stocks, however, brushed off the early jitters thanks in part to a weaker currency and [Bank of England] easing.”

“Bronze” goes to Canada: “Being careful not to go all Friedman-like and botch the call, we do indeed see Canada on the podium right now, thanks to an impressive 25-per-cent rally in the TSX from its January lows.”

“Just missed”: “Much of the bad news had already been priced into the Bovespa, while the turnaround also coincides with the bottom in crude. But, zooming out leaves Brazil’s market still struggling with longer-term downward momentum.”

“Middle of the pack”: “Other commodity-heavy indices in Mexico and Australia have also notched positive performances this year, even as the [Commodity Research Bureau] index has faded recently.”

“Failed to qualify”: “Europe and Japan continue to struggle, with most markets in those regions anywhere from flat to down 20 per cent so far this year.”