Two recent reports speak volumes about Toronto and its nearby communities: Many people can’t afford a detached house in the city, but they can find a job.

All of which can make for an angry commute.

The first report, from the Toronto Real Estate Board last week, showed home prices surging across the city and outlying areas again in December. And later this week, a fresh reading of the Teranet-National Bank home price index is certain to drive the point home.

The second recent report, from Statistics Canada Friday, showed the relative strength of the jobs market in and around Toronto.

Mr. Guatieri cited the sharp rise in all types of homes in Toronto and surrounding areas, including Oshawa, Hamilton, Brantford, Cambridge, Guelph, Barrie and the Niagara Region.

“Those seeking a detached home, but unwilling or unable to take on a giant mortgage, faced a gruelling and more expensive commute,” Mr. Guatieri said, citing the fact that the average price for a detached home in the Greater Toronto Area now stands above $1-million.

Indeed, he added, “the typical family in the GTA is priced out of the detached market, with condos the last refuge, and even that won’t last long if prices continue to escalate.” 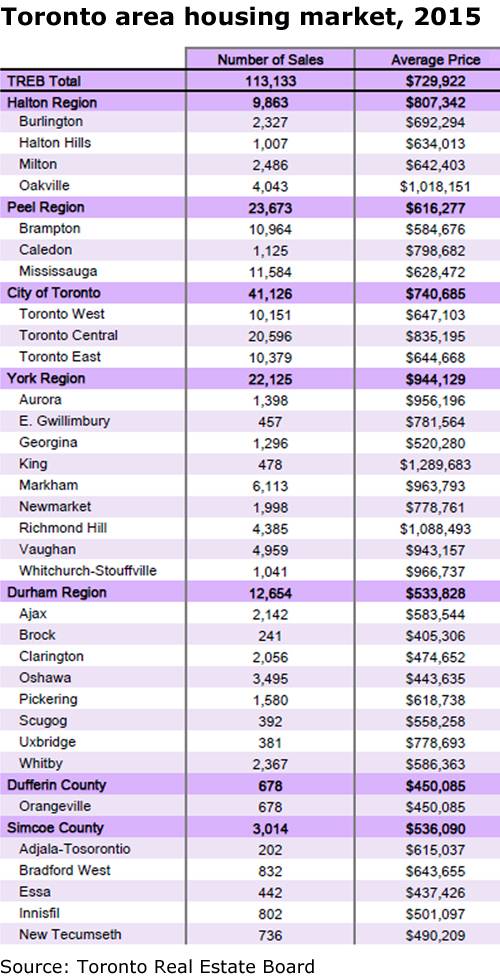 Many are commuting to Toronto from outside the city, which helps buoy the employment picture in the outlying areas. In Statistics Canada’s monthly labour force survey, you’re counted as employed in the city in which you live, not where you work.

So, for example, Oshawa, Brantford, Guelph and Hamilton all boast unemployment that is well below the national average, at 5.2, 4.7, 4.5 and 5.9 per cent, respectively.

At 6.8 per cent, Toronto’s jobless rate is just a hair below the Canadian average.

Senior economist Robert Kavcic, Mr. Guatieri’s colleague at BMO, noted these showings in a monthly report card he prepares on job markets at the city level.

Several cities surrounding Toronto scored exceptionally well in his latest look, which is based on Statistics Canada’s survey findings.

“You’re free to snicker at Oshawa and Brantford holding the top two spots (the small cities often see their numbers exaggerated) but the city-level ranking, when taken as a whole, tells a pretty clear story of employment conditions firming around the periphery of the GTA (Kitchener and Guelph are also locked in the top 10),” Mr. Kavcic said.

It’s not just employment and low interest rates driving Toronto home prices into the stratosphere, and raising concerns that a bubble could pop. Speculation and foreign money are also believed to be playing a role.

Some observers suggest that even more foreign money is flooding into Toronto real estate after being shut out of Vancouver.

In an attempt to cool that market, the British Columbia government slapped a 15-per-cent tax on foreign buyers of Vancouver area homes, presumably pushing them to other cities.

“It’s probably no coincidence that prices have ramped higher in Toronto, Victoria and Seattle.”

Many economists believe the Toronto housing market will ease off, though not contract outright, in the wake of separate, national tax and mortgage measures brought in by the federal government late last year to cool things down.

The fact that so many people can’t afford the city will also play a role, they say.

Nonetheless, the Toronto market will remain “vibrant,” said Mr. Guatieri, warning, like other observers, of potential trouble if things get out of hand.

“We expect Toronto home sales will come off their highs this year, while price growth will simmer down to the mid-single digit range,” Mr. Guatieri said.

“If Toronto’s market doesn’t pipe down, it will continue to fan household debt and become ever more vulnerable to a correction when demand fundamentals weaken.”

Lululemon Athletica Inc. boasted of a “strong” holiday selling season and narrowed its fourth-quarter outlook to the upside.

The Vancouver-based company now projects quarterly revenue of between $775-million (U.S.) and $785-million, compared with its earlier call with a bottom of $765-million.

Earnings per share are now forecast to come in at between 99 cents and $1.01, the previous bottom being 96 cents.