The Bank of Canada has a lot to say about Toronto’s housing bubble in the wake of Ontario’s attempts to ensure it doesn’t pop.

As The Globe and Mail’s David Parkinson reports, the central bank said in its latest review that Canada’s financial system is still “resilient.” But inflated home prices in Toronto and Vancouver, and the rising consumer debts that accompany them, are a growing threat.

It devoted a lot of space in the document to that region of southern Ontario dubbed the Greater Golden Horseshoe, where prices have been soaring as those priced out of the Greater Toronto Area are forced to look further afield.

Here’s the Bank of Canada map that says it all: 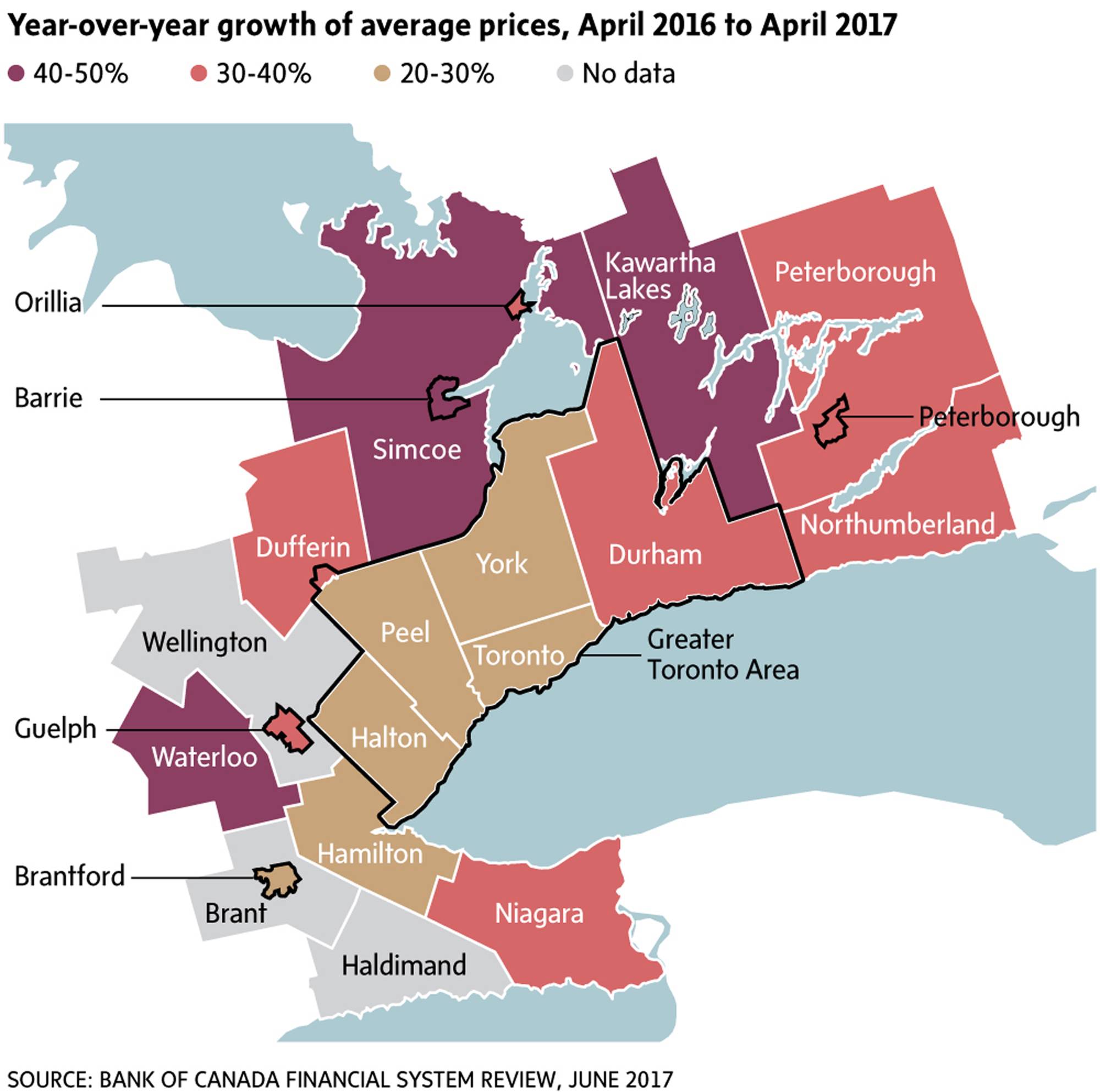 “Prospective homeowners priced out of the GTA have looked increasingly farther in search of more affordable housing, bidding up prices throughout much of the Greater Golden Horseshoe area,” the central bank said.

“As a result, prices in the areas surrounding the GTA have increased at an even faster pace than they have within the GTA.

And that’s no small feat when you consider what has happened in Toronto, where the average price of a detached home is now about $1.5-million.

“In an environment of both strong demand and relatively low supply, housing inventories in the Greater Toronto Area (GTA) have remained lean for some time,” the Bank of Canada said.

“House prices are up 58 per cent on a seasonally adjusted three-month annualized basis and 32 per cent relative to levels one year ago as of April.”

That’s what prompted the Ontario government to bring in a series of measures, including a tax on speculative buying among foreigners and an expansion of rent controls.

The Toronto market is now cooling - but that’s not saying much, given the prices - and economists expect it to cool further. But they note how Vancouver tanked in the wake of a foreign-buyer tax and how it is now rebounding, raising questions about whether the impact of Ontario’s measures will be short-lived.

The Bank of Canada also raised this issue.

“Non-resident demand is contributing to price gains in the GTA as well, although uncertainty about the magnitude remains,” the central bank said.

“As a result, the non-resident speculation tax introduced by the Ontario government in late April will likely temporarily dampen price growth,” it added.

“This potential impact includes a moderation in price expectations, which may have played a role in the recent sharp increase in listings and slowdown in resales in the GTA.”

What the central bank is saying is that “the risks to the Canadian financial system remain unabated,” as Toronto-Dominion Bank senior economist Brian DePratto put it.

“Households continued to pile on debt, and gains in home prices are, according to the Bank of Canada, at least somewhat divorced from fundamentals,” he added.

“Indeed, when it comes to home prices, a correction in overheated markets is now seen as enough to trigger a downturn on its own, rather than requiring household financial stresses to occur simultaneously (although such an outcome would almost certainly trigger a financial stress). Moreover, although a decline in the share of high-ratio (insured) mortgages is welcome, the bank has identified some concerning trends in the uninsured mortgage market.”

The central bank now believes that the risks to the system “have risen perhaps slightly” since late last year, as “they’ve carved out a home price correction in Toronto as an added risk,” according to Benjamin Reitzes, Canadian rates and macro strategist at BMO Nesbitt Burns.

“While worries about the vulnerabilities surrounding household indebtedness and housing imbalances remain present, the BoC believes that the new mortgage tightening measures will help mitigate those concerns,” he said.