Lactose, lumber and the loonie

Much of what we’re seeing as the United States threatens Canada’s lumber and milk industries is – please forgive me here – udder nonsense.

First off, Donald Trump’s administration has been sending wildly mixed messages as it suddenly shifts its trade guns from Mexico and China to Canada.

Then there’s the fact that much of what it’s doing could hurt its own people.

And then there’s the question of whether this is just Trump being Trump. The problem there is that you just can’t tell because Trump is Trump.

“Trump seems to be energized by the coming end of his first 100 days in office, determined to show some ‘wins’ on various files,” said CIBC World Markets chief economist Avery Shenfeld.

“That explains the rush to do something on trade this week, along with releasing what will likely be only a sketchy outline of a tax reform proposal, one that will include details making its full passage by Congress unlikely,” he added, referring to the expected unveiling today of the President’s fiscal plans “We can hope that once the 100-day mark is behind us, the wheels of protectionism grind more slowly again.”

Some observers believe this may be the administration setting the stage for renegotiating the North America free-trade agreement.

And they note, this week’s decision to hit Canada’s softwood lumber industry with preliminary duties was not only expected, but would have happened regardless under any president as the latest in a decades-long dispute.

But, while downplaying the idea, some wonder if Canada and the U.S. may be on the brink of tit-for-tat trade action.

To recap, Mr. Trump, who initially said the Canada-U.S. relationship needs only a tweak, recently slammed our dairy, lumber and energy industries.

As The Globe and Mail’s Adrian Morrow, Steven Chase, Les Perreaux and Brent Jang report, that was followed by the decision on countervailing duties on softwood this week, which, among other things, knocked the loonie for a loop.

U.S. Commerce Secretary Wilbur Ross stressed this was not the opening of a trade war with Canada.

Ah, but Mr. Trump went further in comments, and had this to say via Twitter: “Canada has made business for our dairy farmers in Wisconsin and other border states very difficult. We will not stand for this. Watch!”

(That’s not quite Pierre Trudeau at his most famous, but close enough.)

Here’s something of a breakdown (of the issues, rather than of the Canada-U.S. relationship) and how observers see things:

Real or a NAFTA precursor?

It’s certainly real enough. But, again, the duties were expected after the expiry of the last softwood pact and probably would have been the same under another president.

“Most likely this is a litmus test to determine the scope for tweaking NAFTA rather than the opening salvo of a trade war ... We note that barring a few contentious microeconomic issues, Canada is a limited contributor to the U.S. trade deficit, leaving it less vulnerable to a shift in rhetoric.” Mark McCormick, North American head of foreign exchange strategy, TD Securities

“While not significant in itself, this latest chapter in the softwood lumber dispute could give clues about how hard-line the Trump administration aims to be when renegotiating NAFTA.” Krishen Rangasamy, senior economist, National Bank

“We expect the U.S. to send a notification to open NAFTA for renegotiation soon ... Consider the TPP blueprint that the staffs of the three countries involved had already agreed on as a starting point. But in the meantime uncertainty will likely be high as countries take different postures or even actions such as the impositions of tariffs to improve their leverage. The risk is that it all ends in a trade war, although the strength of the value chains in North America makes the latter an unlikely scenario, in our view.” Carlos Capistran, Canada and Mexico economist, Merrill Lynch

Some economists note the industries at issue are small, and thus the macro impact muted. But there are hundreds of thousands of jobs at stake and, for that matter, the hope that exports will help Canada’s economy shift from housing and consumer spending. 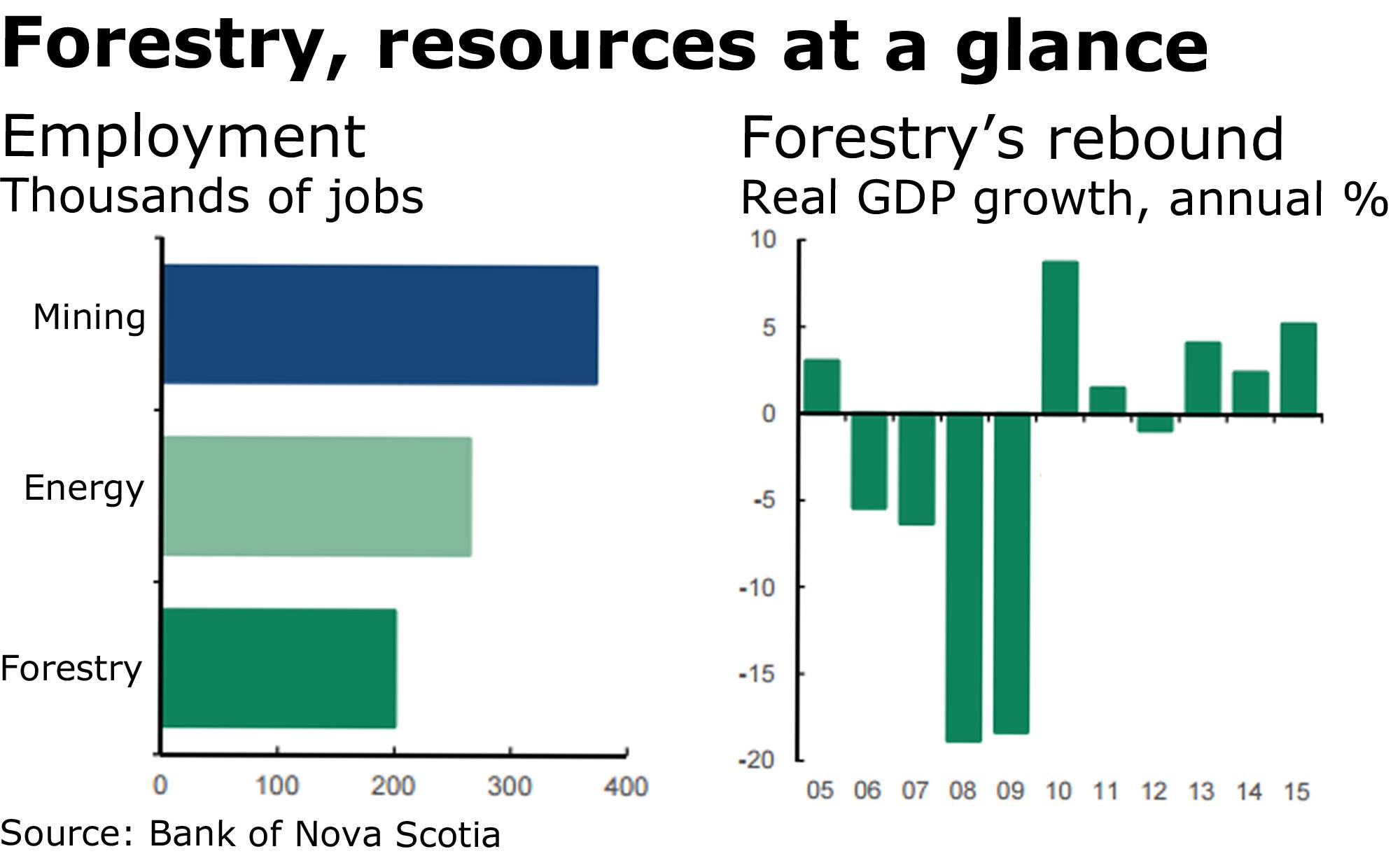 “Lumber exports are a fairly small share of total exports but the numbers (employment, geographic diversity, the potential hit to exports broadly) speak for themselves. The rebound in softwood lumber contributed to around 25 per cent of the increase in the non-energy exports last year and, following the last lumber tariff imposition in 2001, Canadian exports fell 12 per cent in three years a recent Bloomberg report noted.” Shaun Osborne, chief foreign exchange strategist, and Eric Theoret, foreign exchange strategist, Bank of Nova Scotia

“Forestry still matters to Canada’s economy and labour market and it shouldn’t be a surprise that a spirited defence is in order.” Derek Holt, head of capital markets economics, Bank of Nova Scotia

“The application of duties will, as in the past, crimp the merchandise trade balance and current account, which explains why the Canadian dollar has been put on its back foot. And as the B.C. budget recently noted: U.S. trade actions on softwood lumber pose a ‘key risk’ to fiscal projections, too.” Warren Lovely, head of public sector research, and Mr. Rangasamy, National Bank

“If this indeed is just a more idiosyncratic replay of earlier cycles of a perennial U.S.-Canada lumber conflict, rather than a harbinger of a more confrontational U.S.-Canadian trade outlook, then the impact on Canada’s macro story from a narrow impact should be fractional, given the relatively small footprint that softwood lumber exports to the U.S. has on the broader Canada macro picture ... Dairy accounts for an even much smaller fraction in the economy.” Daniel Hui, JPMorgan Chase

Impact on the U.S.

There is the potential to backfire, but, first, consider this:

“What is noteworthy is the states that this wood goes to – the top 10 are Washington, Texas, New York, Oregon, Michigan, Pennsylvania, Massachusetts, Minnesota, North Carolina and Illinois – all are politically important in the 2018 midterm elections to varying degrees,” said Deutsche Bank macro strategist Sebastien Galy and economist Brett Ryan.

“This highlights the highly political nature of trade disputes – it has less to do with broader macroeconomic arguments.”

As for the economic impact, consider that lumber prices had already been jacked up in advance of the duties as Canadian producers prepared for this outcome.

And while the slump in the loonie is a byproduct of the tariffs, it’s worth pointing out that Canadians may be earlier than ever to travel south for summer vacation. The loonie’s low level even before this would have been a deterrent, but less than 74 cents has to have a psychological impact.

“As the U.S. random lengths lumber price metric approaches the highest of the post-crisis era, U.S. homeowners will pay a price ... Higher lumber prices and a half-percentage-point rise in the 30-year U.S. fixed mortgage rate since last September is an odd recipe for a continued housing recovery in the U.S. by way of imposing higher financing and input costs.” Mr. Holt

“U.S. tariffs against Canada increase the value of the U.S. dollar as it makes U.S. exports more attractive. A narrow tariff base including lumber and likely soon dairy significantly reduces the currency impact. Canada can fight and impose similar penalties targeting exports of cereals in regions that are key for the U.S. administration.” Mr. Galy and Mr. Ryan

The loonie and Bank of Canada

The loonie has been hovering around the 73.5-cent mark today, having been knocked hard, and forecasts for where it goes next vary.

Some observers believe it could fall to between 70 and 72 cents, while others think the rout was overdone. Of course, the currency is being buffetted not only by the duties, but also oil prices.

There’s also an issue for the Bank of Canada, which isn’t unhappy to see a weak loonie that it hopes will juice exports and whose governor, Stephen Poloz, has built trade uncertainty into his outlook.

“In an ultralow interest rate environment, tariffs dampen a tad expectation of Bank of Canada tightening leading to an outsized reaction of [the U.S. dollar to the loonie]. Canada is therefore already the de facto winner in this mercantile/political approach to trade.” Mr. Galy and Mr. Ryan

“The increase on trade uncertainty will be highlighted by the BoC, which will support our strategists’ view of a weaker [Canadian dollar], in our view.” Mr. Capistran

“The governor suggested that policy makers had factored in some risk of a lumber dispute into its outlook so it is not clear that this week’s development will move the dial on the bank’s outlook materially, or at all. However, trade frictions are one of the uncertainties that the BoC has referred to recently, along with the material excess slack in the economy, that is keeping policy makers sitting on their hands. An apparent rise in protectionist attitudes in Washington over the past week suggests that is unlikely to change soon.” Mr. Osborne and Mr. Theoret

“The [U.S. dollar vs. the loonie] rally is overdone and there is scope for retracement short-term.” Sue Trinh, head of Asia foreign exchange strategy, Royal Bank of Canada

For the U.S. dollar vs. the loonie, “we think this risk premium priced into the currency is overblown. Our outlook for the pair has held the option for a build-up in the risk premium on the potential for trade spats between the two countries ... We also note the recent reaction in [the U.S. dollar vs. the loonie] to the lumber tariffs is likely a delayed response to the prospects for minor trade protectionism since the pair failed to price any trade risks following the U.S. election.” Mr. McCormick