Vancouver ranks fifth behind Vienna, Zurich, Auckland and Munich. Toronto ties with Melbourne for No. 15, Ottawa is No. 17, Montreal is No. 23 and Calgary No. 32.

At the very bottom of the 230-country ranking released today is Baghdad.

Mercer looks at everything from local economies and health care to education and safety in its rankings, which, among other things, can help companies calculate compensation for foreign postings.

“Quality of living remains high in North America, where Canadian cities dominate the top of the list,” Mercer said.

“You were born in Canada. You can't even get on Jeopardy, let alone into the White House.”

Bank of Montreal kicked off the latest round of Canadian bank earnings with a first-quarter profit topping $1-billion.

“Our results this quarter reinforce our confidence that successfully executing on our strategy will enable us to meet customers’ changing expectations and continue to perform well in an unsettled environment,” said chief executive officer Bill Downe.

Opposition politicians may be slamming the spending plans of the new Canadian government, but there’s a reason economists aren’t exercised:

Ottawa can afford to do it, it promised to do it, and it has a responsibility to do it.

“Even with such deficits, the debt-to-GDP ratio should remain low relative to other OECD economies,” said National Bank Financial senior economist Marc Pinsonneault.

“In our view the government has the flexibility to provide fiscal stimulus to a Canadian economy that badly needs it.”

As The Globe and Mail’s Bill Curry reports, Mr. Morneau now projects a deficit of $18.4-billion in fiscal 2016-17, followed by another of $15.5-billion a year later. The budget will be unveiled March 22. 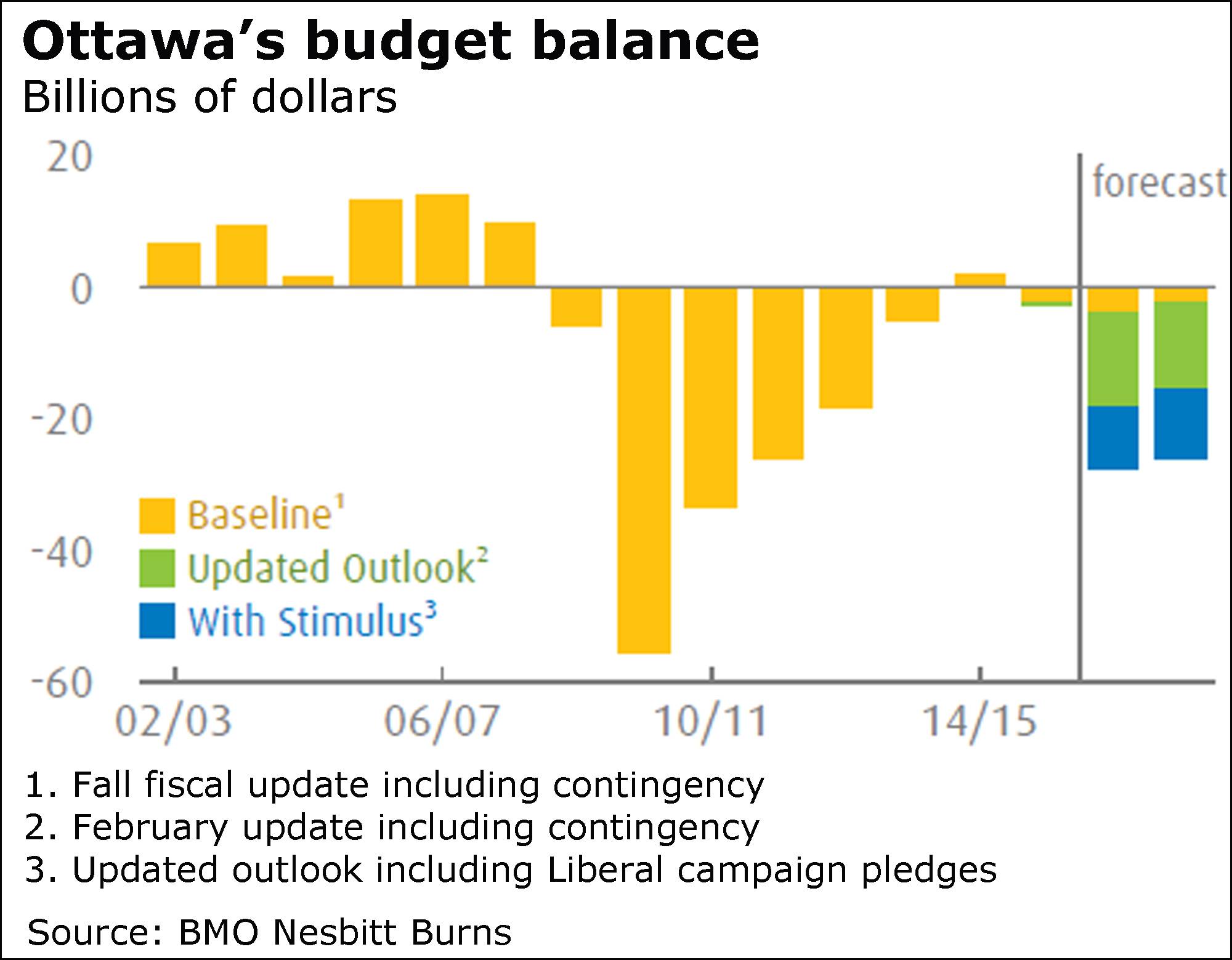 When you add the spending promises of the fall election campaign, those shortfalls look to come in at more than $25-billion in each year.

Indeed, there have been calls for the government to go above and beyond its campaign pledges given the severe hit to the economy from the oil shock.

Both Ottawa and the Organization for Economic Co-operation and Development now forecast economic growth of just 1.4 per cent in Canada this year, and other projections suggest 1 per cent or lower. Unemployment is projected to stick stubbornly near the 7-per-cent mark.

But, economists say, once you put it in perspective it’s nothing to fret over at this point.

And when you do that, it “should hardly scare off foreign investors,” Mr. Pinsonneault said.

“The federal debt-to-GDP ratio has dipped in each of the past two years, and remains relatively low at 31 per cent,” they added. 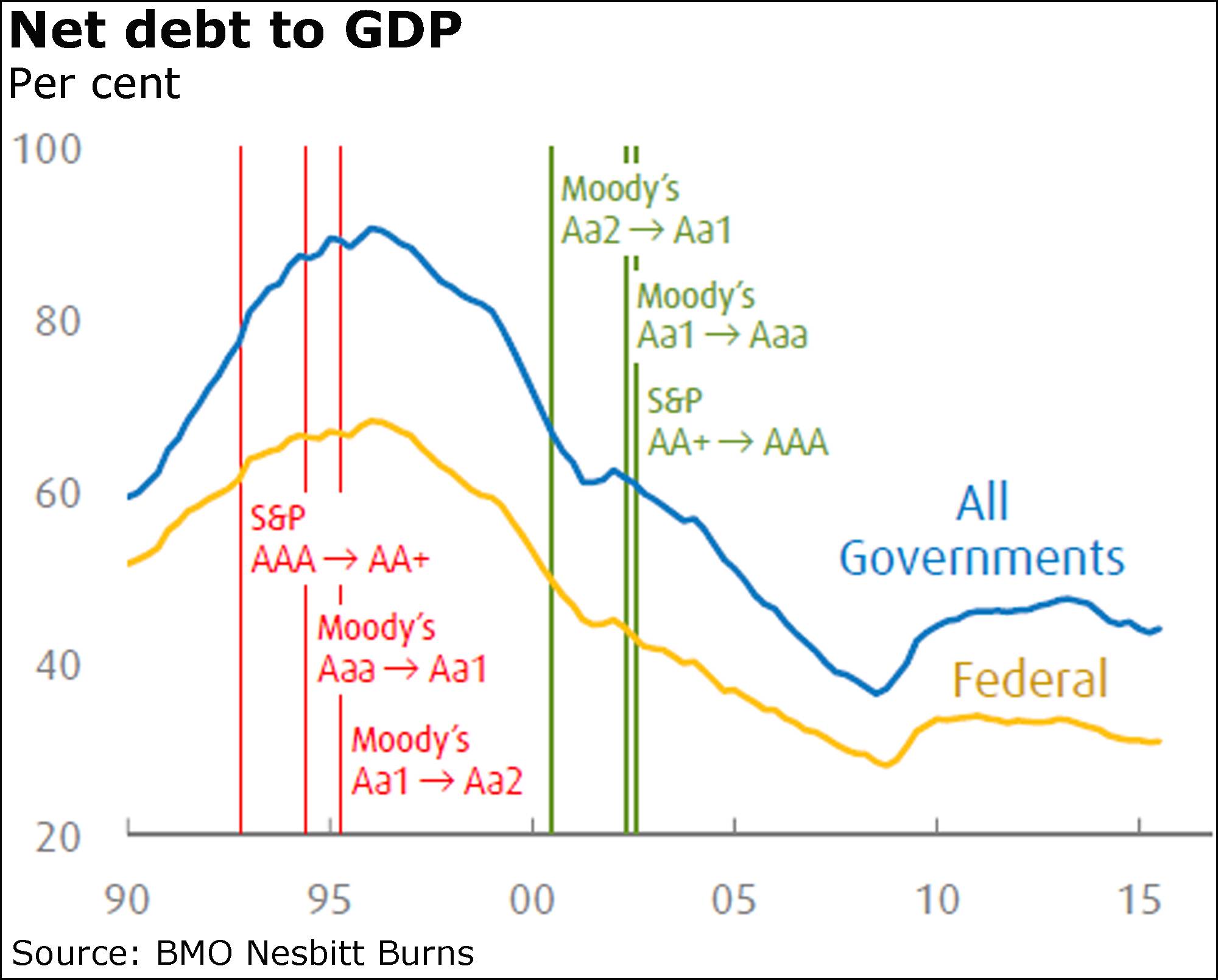 “Additionally, total government debt (including other layers of government) remains comfortably below levels that prevailed during the mid-1990s when Canada’s credit rating fell under pressure.”

To be clear, Mr. Porter and Mr. Kavcic advise moving cautiously, keeping spending in check, but they “fully agree that a moderate dose of stimulus is an entirely appropriate response to current economic realities.”.

There are still questions about whether the Liberal stimulus will do the trick given the ever-sinking economic outlook.

Including those measures, the 2016-17 deficit would equal only about 1.5 per cent of GDP, which is “hardly a blow-up,” said CIBC World Markets chief economist Avery Shenfeld.

“The only question is whether the modest dose of stimulus pledged in the campaign (roughly a half-per-cent of GDP) is enough to counter the drag on the economy from low commodity prices,” he added.

Bank of America Merrill Lynch also noted that Ottawa could come in with an “even larger” budget gap in a month.

“With Morneau stating that it’s ‘difficult’ to balance the budget by 2019-2020, we expect an extended period of large deficits,” economist Emanuella Enenajor and strategists Ralph Axel and Ian Gordon said in a report.

“Shopping local” is about to give Canada’s economy a small jolt, as Ms. Enenajor of Bank of America Merrill Lynch sees it.

The North America economist at Bank of America Merrill Lynch noted in a recent report that the country’s travel deficit, or the amount spent in Canada by foreigners minus the spending of Canadians abroad, was a hefty $18.1-billion in 2014, or about 1 per cent of gross domestic product.

There has been a shift along with the decline in the loonie, with fewer Canadians travelling outside the country and a “slight uptick” in foreigners entering. 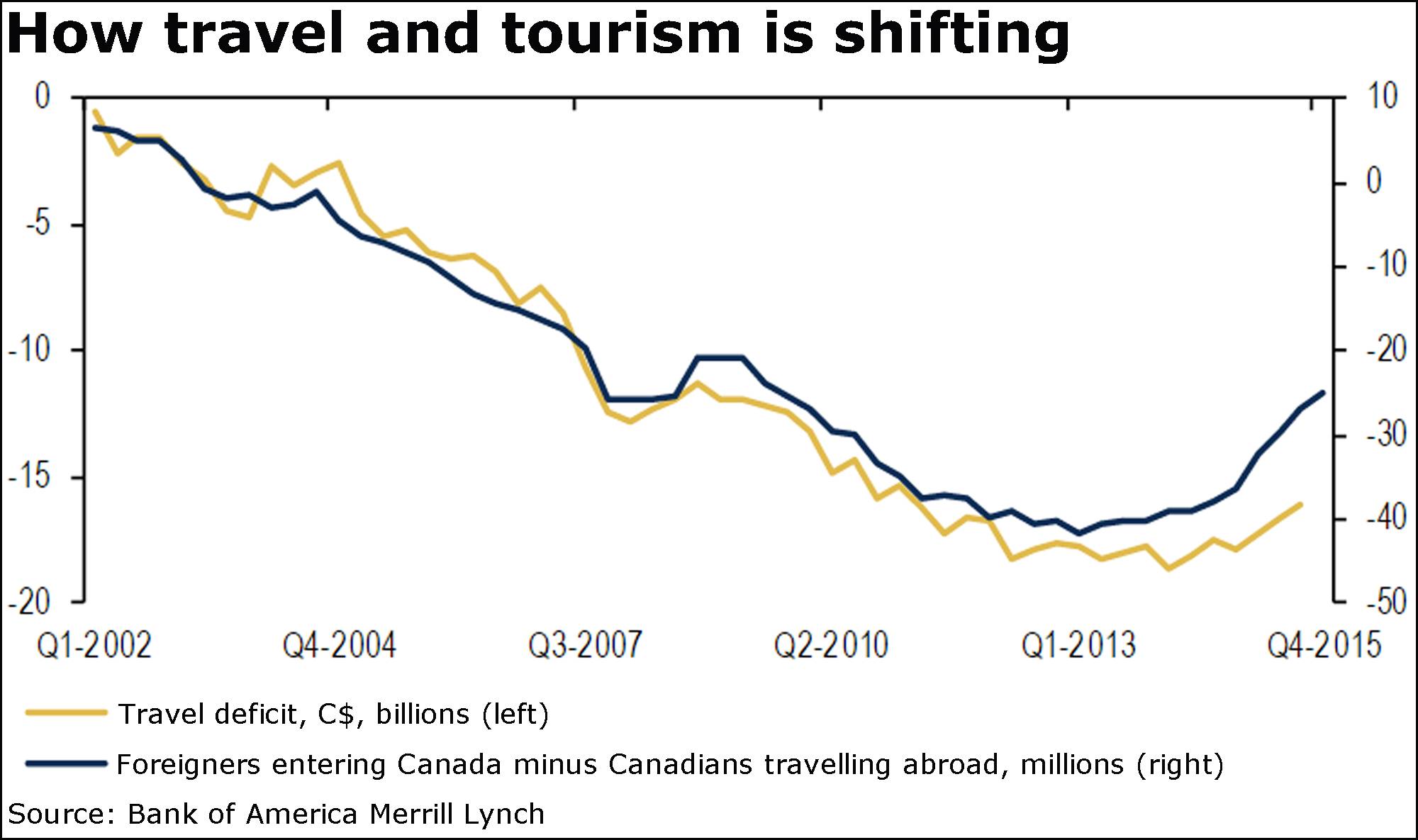 That should mean both tourists and Canadians spend more in Canada, Ms. Enenajor said.

“The economic impact could be modest but notable,” she said.

“For example, if the travel deficit were to halve, this would represent a net $9-billion (0.5 per cent of GDP) benefit to the Canadian economy via domestic spending,” she added.