Many observers may be brooding over what they see as the bubbly nature of the Toronto and Vancouver housing booms, but analysts are quick to counter with why they see no quick end.

Much has to do with jobs, National Bank Financial points out. 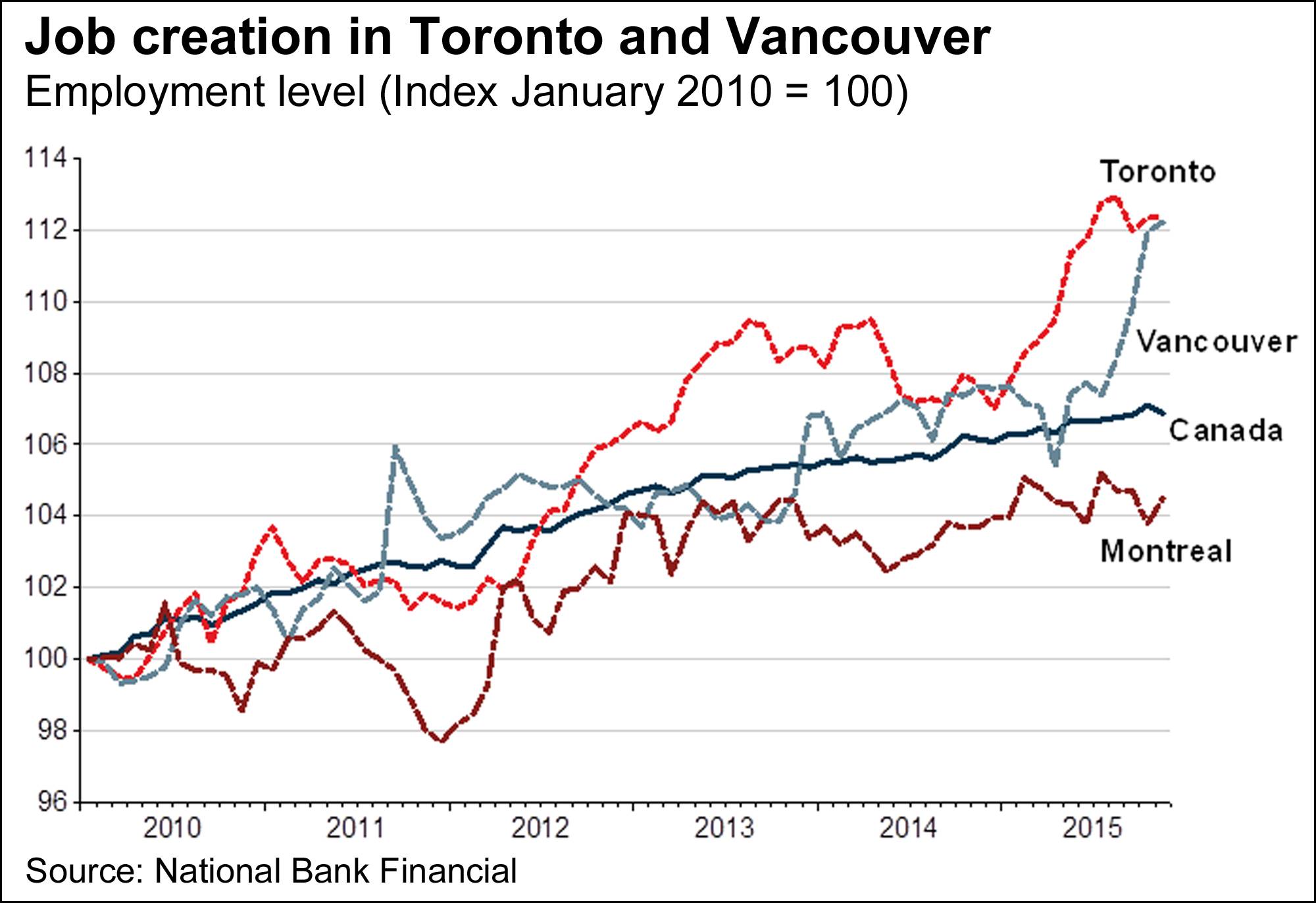 “Job creation has actually been quite strong in Toronto and Vancouver in recent quarters when compared to the national average,” chief economist Stéfane Marion said.

“Large inflows of permanent immigrants (about 240,000 in the past year) coupled with the misfortune of commodity-producing regions have redirected inter and intra-provincial population migration flows towards Toronto and Vancouver,” he added in a research note.

“The good news is that these productive resources have for the most part been absorbed by the job market. So long as this situation endures, home prices in those two cities are unlikely to weaken significantly.”

Royal Bank of Canada, too, cited the Ontario and B.C. labour markets in its recent forecast for the provinces, though it also cited the frothy nature of Toronto and Vancouver housing.

In Ontario, employment gains have accompanied rising property values that have fed the wealth effect.

“Although frothy in some areas (e.g., Toronto), we believe that the provincial housing market will continue to be supported by strong demand, which will maintain housing construction at historically elevated levels,” RBC economists said in the report.

As for Vancouver, RBC questioned how far that market can go, though it doesn’t see a pop at this point.

“Annual price gains have accelerated to double-digit rates in markets such as Vancouver and are becoming increasingly unsustainable,” the bank said, citing the tight market.

“Nonetheless, still-tight supply conditions are expected to prevail in the short term and support further property appreciation albeit at a decelerating pace.”

And in a new market outlook released today, Re/Max projected that average prices across the country would rise next year by 2.5 per cent.

It cited the spectacular average gains this year in the Vancouver and Toronto areas, of 17 per cent and 10 per cent, respectively.

“New Canadians and foreign investors continued to be an important demographic of buyers in Toronto, Vancouver and Montreal,” it added in its report.

“Attracted to Canada’s stable economy and low Canadian dollar, this trend is expected to continue through 2016.”

Cenovus Energy Inc. is taking further steps to deal with the commodities slump, unveiling plans today to cut spending by 19 per cent from the levels it forecast for this year.

The new plans call for capital investment of between $1.4-billion and $1.6-billion next year, the Canadian energy company said, down from the projected 2015 level of $1.8-billion to $1.9-billion.

Chief executive officer Brian Ferguson said he expects “another volatile year” in the energy industry, but there are no plans to cut the dividend.

“Even if Brent crude prices remain in the US$40-per-barrel range through 2016, we believe we can continue to fund our sustaining capital program, growth projects that are nearing completion and our current dividend level,” he said.

Shares of Glencore PLC surged today after it unveiled a plan to slash its debt and deal with the commodities slump.

Glencore is the second embattled miner this week to overhaul operations and finances, following on the heels of Anglo American.

Among other things, Glencore is suspending its dividend, selling stock and cutting back on certain production.

“The plan to reduce its net debt to $18- to $19-billion appears to be sitting well with investors this morning,” said London Capital Group head analyst Brenda Kelly, noting Glencore is also considering spinning off its agriculture unit.

“In the context of the year-to-date moves in the share price, however, it’s a drop in the ocean and clambering back from the lows as copper prices remain depressed will be no easy task,” she added.

Video: Are these the top places to work?