“Mexico has taken advantage of the U.S. for long enough. Massive trade deficits & little help on the very weak border must change, NOW!”@realDonaldTrump

Forget about what it would take for Donald Trump to build a wall across the vast U.S.-Canada border, and focus on economics.

And the fact that, when it comes right down to it, he can’t afford to anger Canada as he has Mexico.

For the record, the new U.S. president hasn’t attempted to do that, instead sending soothing signals on trade with Canada and moving immediately to restart the Keystone XL pipeline project that had been given up for dead.

So far in his infant presidency, Mr. Trump has targeted broader trade and immigration issues, with a heavy focus on, and war of tweets with, Mexico.

But if he did look north, there are many reasons why he wouldn’t give Canada the evil eye, from trade dependence and jobs to travel and oil. 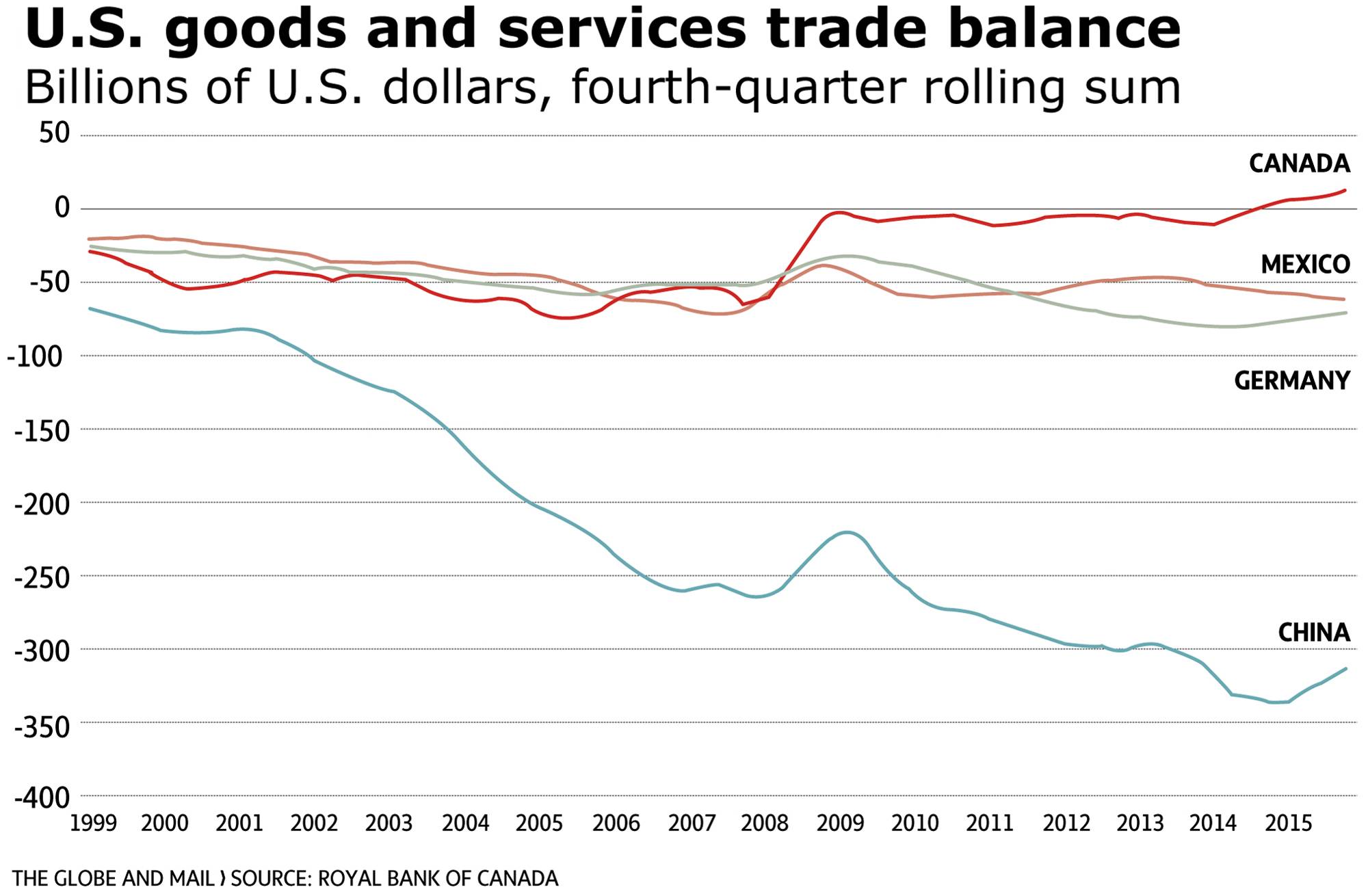 “Underpinning the moves has been President Trump’s assertion that the U.S. will gain ’balanced access to markets and jobs,’” said Royal Bank of Canada economist Laura Cooper.

“Given existing trade relationships, is altering the trade deal with Canada a ‘check and mate’ when it comes to achieving this goal?”

She thinks not. Indeed, many economists, while warning that the uncertainty will nonetheless weigh on Canada, cite many reasons why he won’t.

While the U.S. runs fat deficits with China, Germany and Mexico, trade is almost even with Canada. 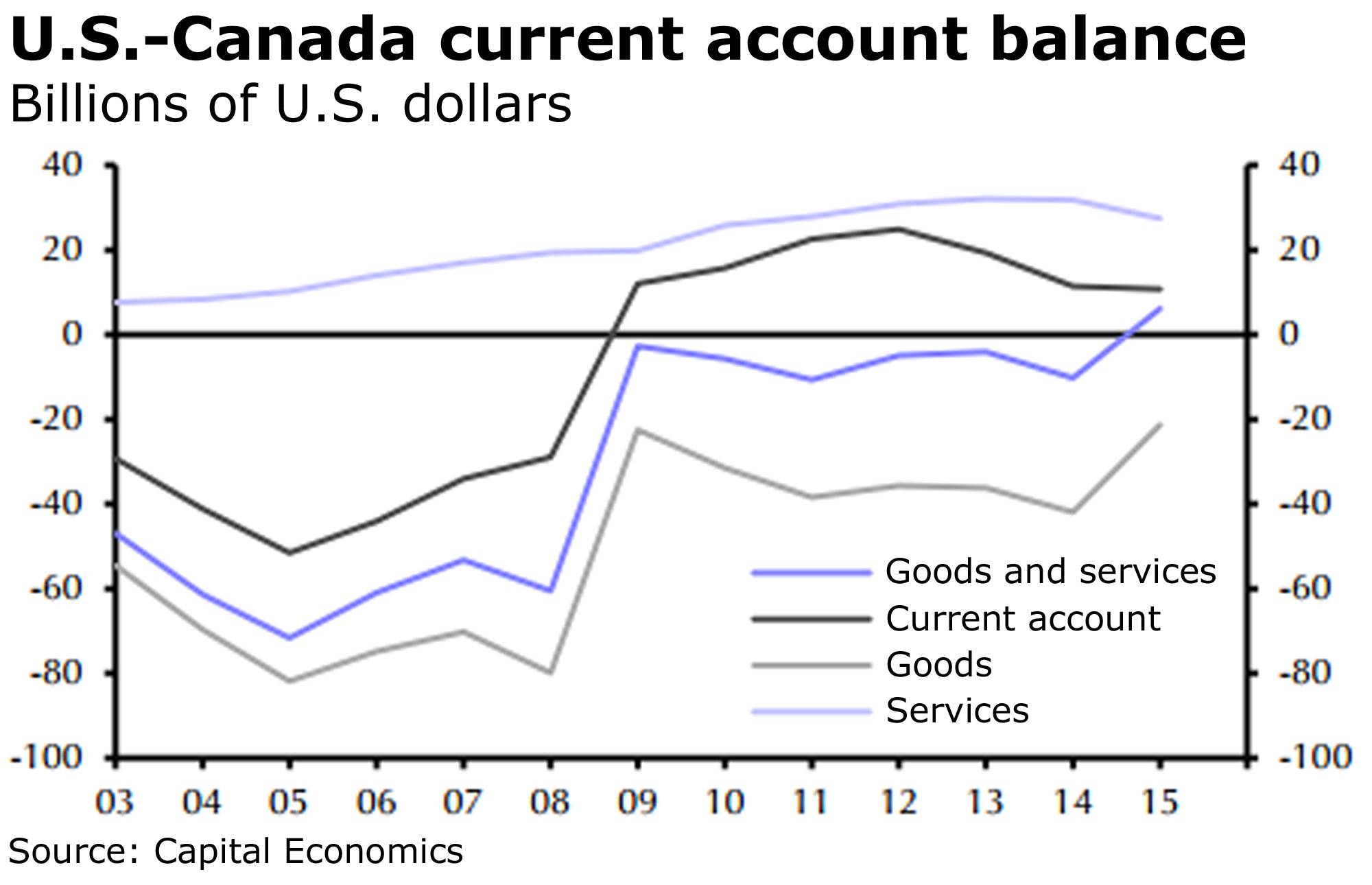 “U.S.-Canadian trade is close to balance and for the past seven years has favoured the Americans slightly,” noted Paul Ashworth, the North America economist at Capital Economics.

Having said that, warned Toronto-Dominion Bank economist Diana Petramala, Canada will have to remain on guard.

“We have to pay attention,” Ms. Petramala said.

“Exports to the United States represent one-fifth of the entire Canadian economy and any thickening of the border would represent a meaningful downside risk to the outlook.”

“Several states are disproportionately dependent on trade with Canada, with two-way trade amounting to more than 5 per cent of gross state product in 11 U.S. states,” said RBC’s Ms. Cooper.

“As a result, it is hard to conceive how disrupting established trade flows between the two countries would improve the ’balance’ that the protectionist policy hopes to achieve.”

This map from Ms. Cooper really tells the story: 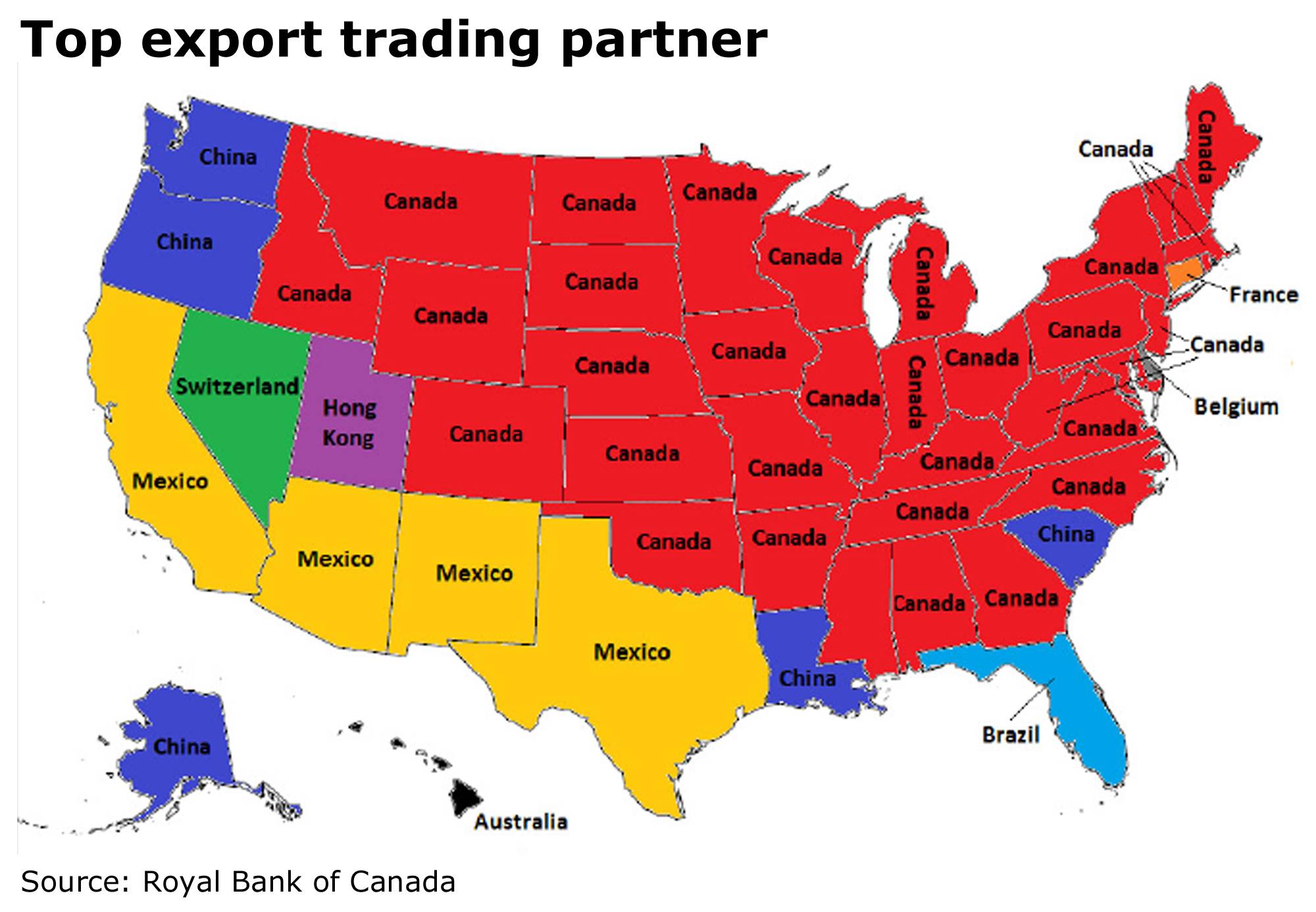 “For example, more than 70 per cent of exports from North Dakota land in Canada, followed by Maine (47 per cent), Michigan (44 per cent) and Ohio (40 per cent),” she added in her recent study.

“The risk that Canada implements countervailing duties or that the U.S. dollar appreciates significantly would severely affect the competitiveness of these U.S. states.”

Ms. Cooper’s research included some striking figures on what two-way trade with Canada has represented for state economies in the last five years: More than 16 per cent in Michigan, 12 per cent in Montana, 11 per cent in New Hampshire, 10 per cent in North Dakota and 8 per cent in Illinois.

“Furthermore, when considering ’balanced access to markets,’ more than half of the states south of the border ran a trade surplus with Canada in 2015.”

Behind Ms. Cooper’s statistics are millions of jobs on both sides of the border.

“The push for protectionist policies and a subsequent renegotiation of NAFTA has, in part, been positioned as a means to stop the outflow of jobs from the U.S.,” Ms. Cooper said.

“It is hard to conceive how restricting trade flows between Canada and the U.S. would achieve this objective,” she added.

“In Canada there are 3.3 million jobs associated with trade while nearly 9 million positions in the U.S. are connected to the trading relationship with Canada.” 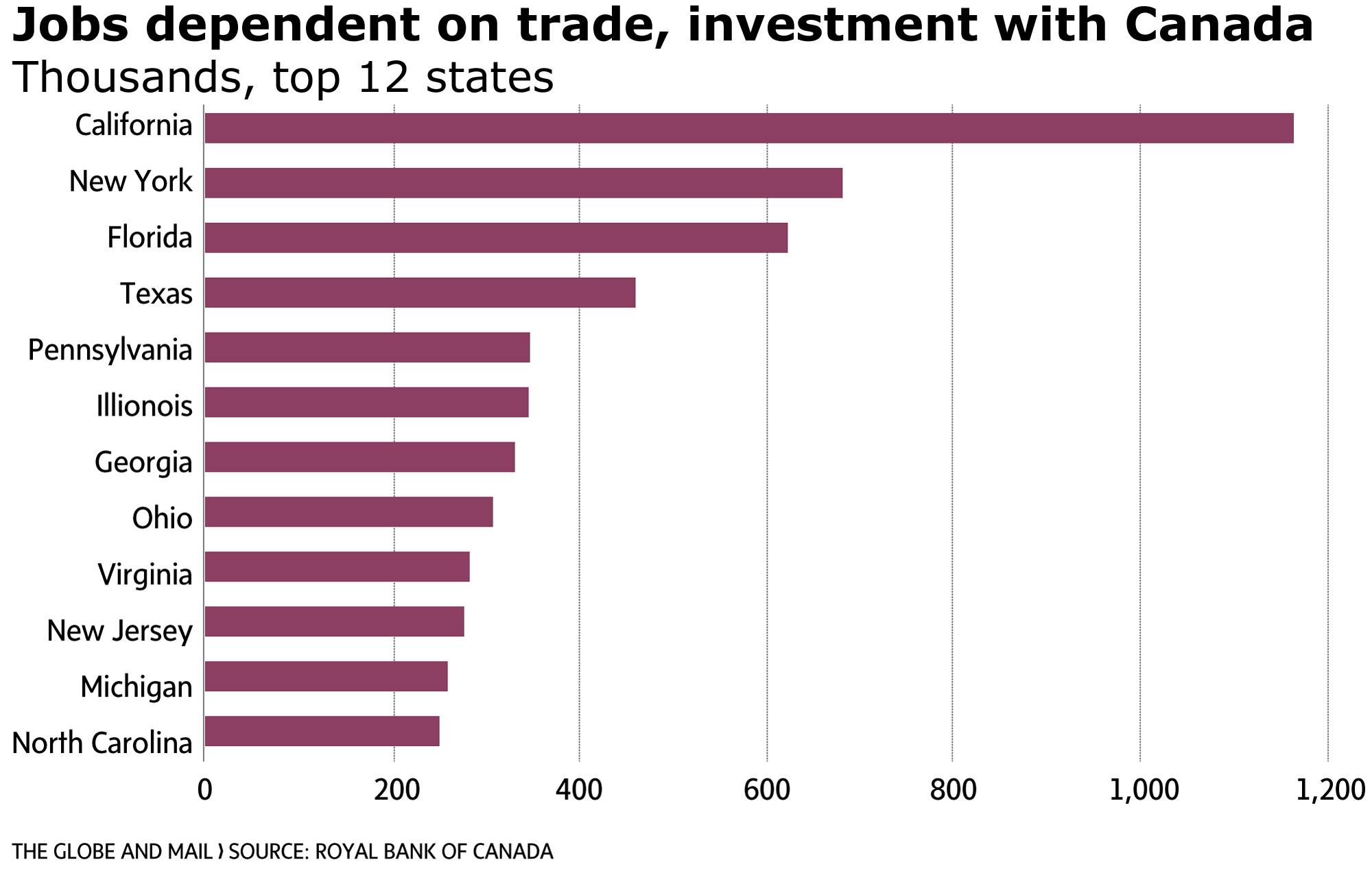 “But even states that are less trade-exposed to Canada have some skin in the trading game: Virginia – where two-way trade with Canada is only 1 per cent of the economy – had 281,000 jobs dependent on Canadian trade in some way in 2015.”

Three-million barrels a day make for a lot of Canadian oil. 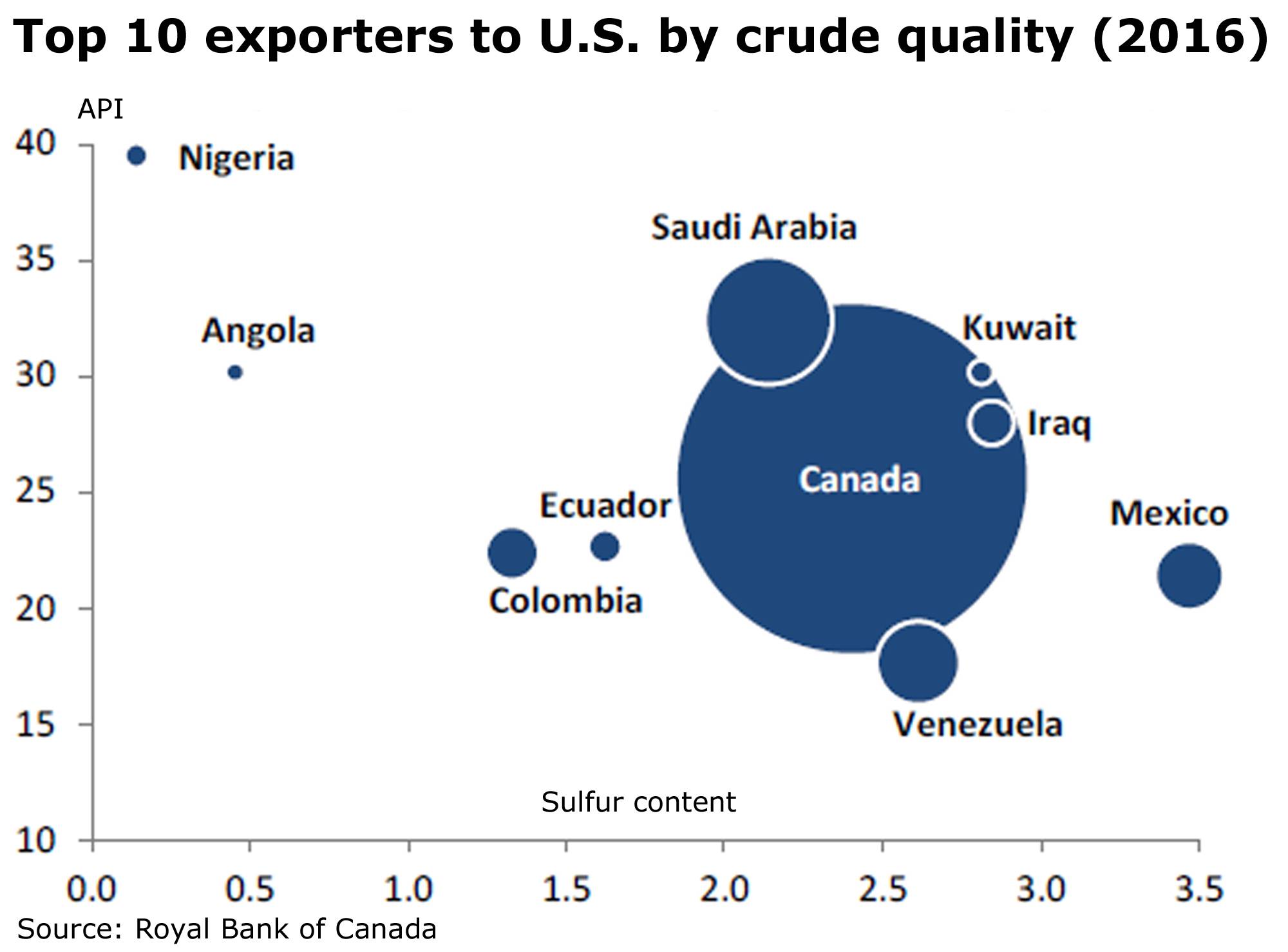 Let’s take that a bit further.

“The [U.S.-Canada] goods deficit is largely because of Canadian exports of oil and gas which, even with the benefit of the shale oil revolution, the U.S. could never replace with its own domestic production,” Mr. Ashworth said.

The U.S. energy deficit with Canada was a hefty $105-billion in 2015, though has since narrowed along with the drop in oil prices.

This is a highly integrated industry, with supply chains that are crucial to production.

It’s also a favourite target of Mr. Trump given the traditionally high-paying jobs attached to it.

“In the case of autos, parts can cross the Mexican and Canadian borders several times.”

The U.S. may have a deficit with Canada where vehicles are concerned, but “that is trivial given the U.S. exported $57.2-billion of automotive vehicles to Canada, and Canada sent $62.6-billion in the other direction,” said Mr. Ashworth, citing 2015 data.

“In contrast, the U.S. exported only $34.1-billion of automotive vehicles to Mexico, but imported $106-billion, leaving a massive $72-billion deficit.” 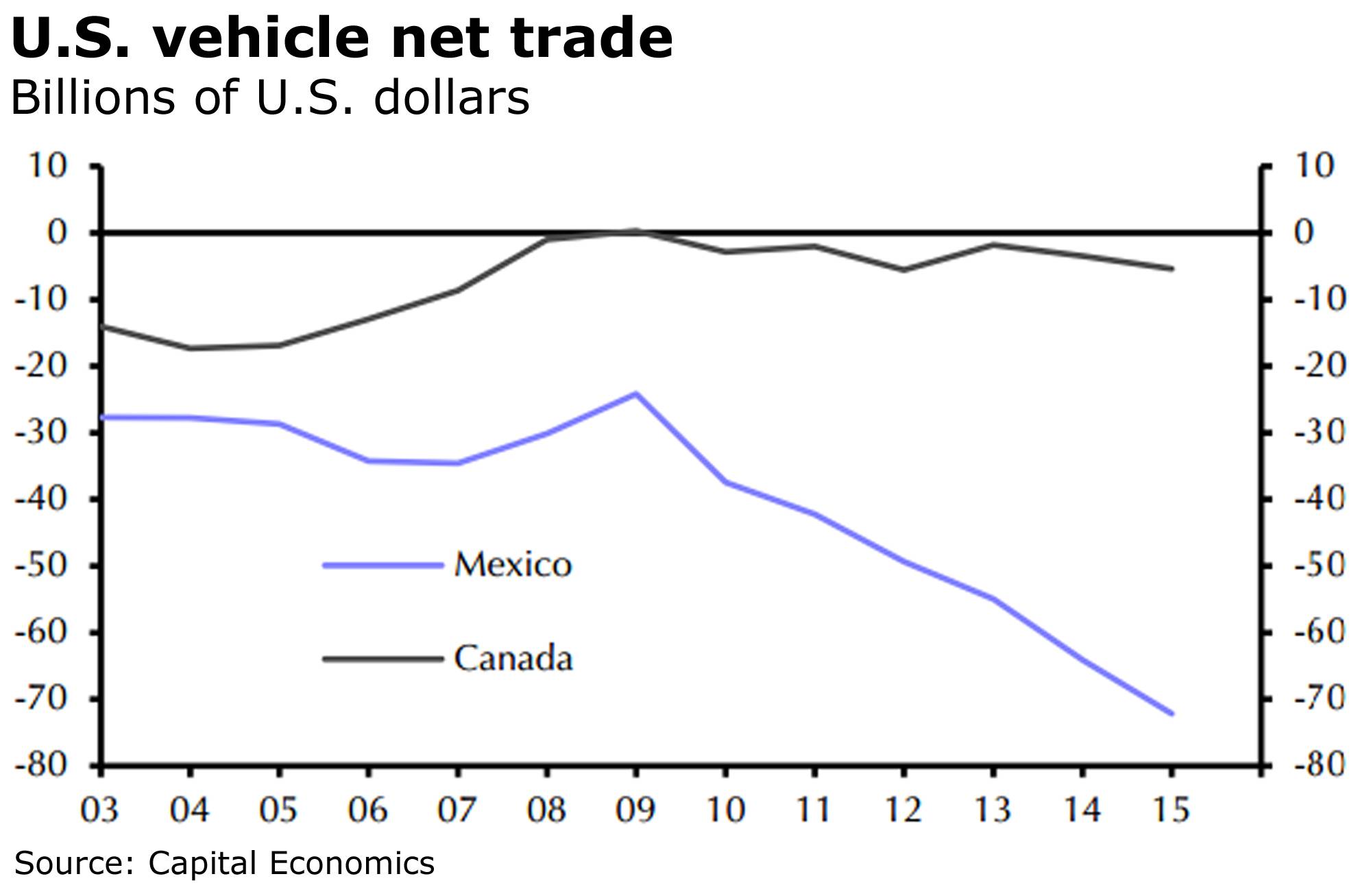 The U.S. vehicle deficit with Mexico is more than double what it was five years ago, Mr. Ashworth noted, but almost unchanged where Canada is concerned.

Okay, Anne Murray’s Snowbird may not have been about Canadians flocking to Florida, but the term has become so much a part of our lexicon. 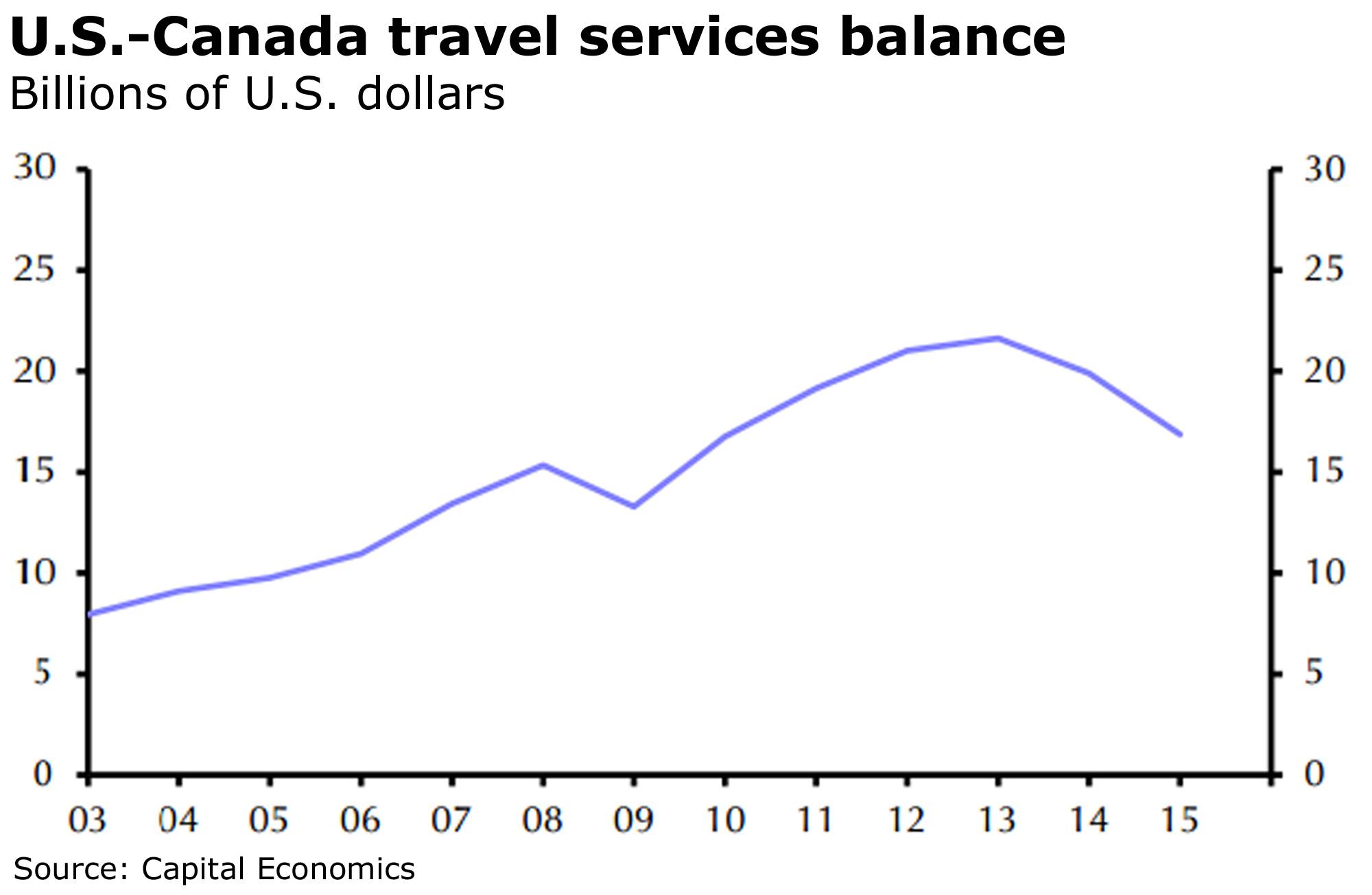 Trump’s announcement that he will push ahead with plans to build a wall along the Mexican border do not necessarily mean a crackdown on the U.S.-Canada border is coming,” Mr. Ashworth said.

“It’s notable that the U.S. also runs a big surplus with Canada in travel services, with Canadian snowbirds and other visitors spending far more in the U.S. than Americans coming the other way.”

So all in all, as Ms. Murray sang and Gene MacLellan wrote, spread your tiny wings and fly away: You’ll get across a wall-free border, and come back home without having to be deported.

Besides what will no doubt be a flurry of tweets from Mr. Trump, there’s a lot for markets to digest.

First up is Statistics Canada, with a Tuesday report on how the economy fared in November, and economists expect to see a rebound from October’s slump.

“Strong results from manufacturing and real retail sales should be the main drivers of a 0.3-per-cent gain in monthly output, offsetting the prior month’s weakness,” said Nick Exarhos of CIBC World Markets.

Tuesday also brings a look at how the euro zone economy closed out the year. Economists at RBC believe GDP expanded at a pace of 0.3 per cent in the forth quarter.

Wednesday brings the latest rate decision from the Federal Reserve, though there won’t be another hike.

This is, of course, the first outing for the central bank since Mr. Trump’s inauguration. And while he has signalled policies that would buoy the economy, markets have yet to see many details since his first-week focus was largely related to protectionist and immigration measures.

“It is way too early for the Fed to actually act on these risks, mainly because all the optimism is based on the belief that we’re about to get a bevy of pro-growth policies out of Washington,” he added.

“If the politicians don’t deliver adequately, financial market and economic optimism could fade as quickly as it surged. But, it is not too early to signal that the evidence supporting an increased rate hike cadence in 2017 is starting to accumulate.”

Closing out the week will be a good one for Mr. Trump, the always-key monthly U.S. jobs report.

TD economists expect to see that economy created 175,000 jobs in January, with unemployment holding at 4.7 per cent.

This is also a big week for investors following quarterly financial results.

“It’s quite clear, however, that the earnings recession is behind us.”