They believe his pledge to run budget deficits and spend on infrastructure will juice the economy, though projections differ, but they wonder how his tax cut for the middle class and tax increase for the wealthy will all wash out.

The prime-minister-to-be is inheriting an economy whose outlook has just been downgraded by the Bank of Canada, though the central bank’s forecast was put together before the Liberal sweep to power and, thus, doesn’t take Mr. Trudeau’s plans into account.

Economists, though, are making fresh calculations, and they do expect a boost to economic growth from infrastructure spending.

They’re not so sure about the tax promises, which involve cutting taxes for the middle class to 20.5 per cent from 22 per cent, and boosting taxes on some rich people to 33 per cent.

“The Liberals believe their plan will be revenue neutral, but this is uncertain since wealthy taxpayers often find ways to avoid paying new, higher rates, especially since the increase will send combined federal and provincial tax rates above 50 per cent in half of the provinces,” said Moody’s Analytics economist Adam Goldin.

There are various tactics, he said, including, for example, how money is given to heirs.

“Steep income tax increases in other countries have often failed to generate the forecast sums because targeted taxpayers often found ways to skirt the higher rates.”

There are also issues around how we spend and save.

“The Liberals plan to shift the distribution of both taxes and family benefits in a manner that will reduce after-tax incomes of wealthier taxpayers, for the most part those earning $200,000 and above, to fund greater net benefits and lower taxes for middle income earners,” said chief economist Avery Shenfeld of CIBC World Markets.

“That’s mostly to address ‘fairness,’ but back of the envelope calculations suggest that there could be a lift of a bit less than 0.2 per cent of GDP due to the greater propensity to spend rather than save at lower income brackets.”

Mr. Shenfeld said the tax on the rich could actually hurt economic growth, noting, as did Mr. Goldin, the combined federal-provincial impact.

“But one has to be careful about claiming economic ruination from such higher brackets,” he said.

General Motors Co. has reached a deal with the United Auto Workers union, the second of the Detroit three to strike labour peace.

“We believe that this agreement will present stable long-term significant wage gains and job security commitments to UAW members now and in the future,” UAW president Dennis Williams said in a statement.

Fiat Chrysler has already struck a deal with the union, and Ford Motor Co. is up next.

It’s a big week on both the economic and corporate sides of the calendar.

First up is the Alberta government, with its budget on Tuesday.

Then on Wednesday, Investors will be watching closely for the latest pronouncement from the Federal Reserve, though they’re expected to get a whole lot of nothing.

“Not only do we expect the statement to change very little, but there is also no scheduled press conference (making the probability of this being a non-event even higher),” Royal Bank of Canada said in a report.

“We continue to believe that if the Fed is going to hike in December (our official call), it will have to work much harder on selling the idea of a hike to the market. Thus far the market is only pricing in a roughly one-in-three chance of a hike, which is much too low given year-end liquidity concerns.”

Thursday brings the latest reading on the state of the American economy, and economists expect growth will clock in at somewhere between 1.6 per cent and more than 2 per cent for the third quarter, annualized.

“After rebounding strongly in Q2, U.S. economic growth momentum is again looking shaky as the intense global headwinds push the recovery slightly off track,” Toronto-dominion Bank said in a report.

Statistics Canada closes out the week with what is projected to be a tame report on how the economy fared in August. 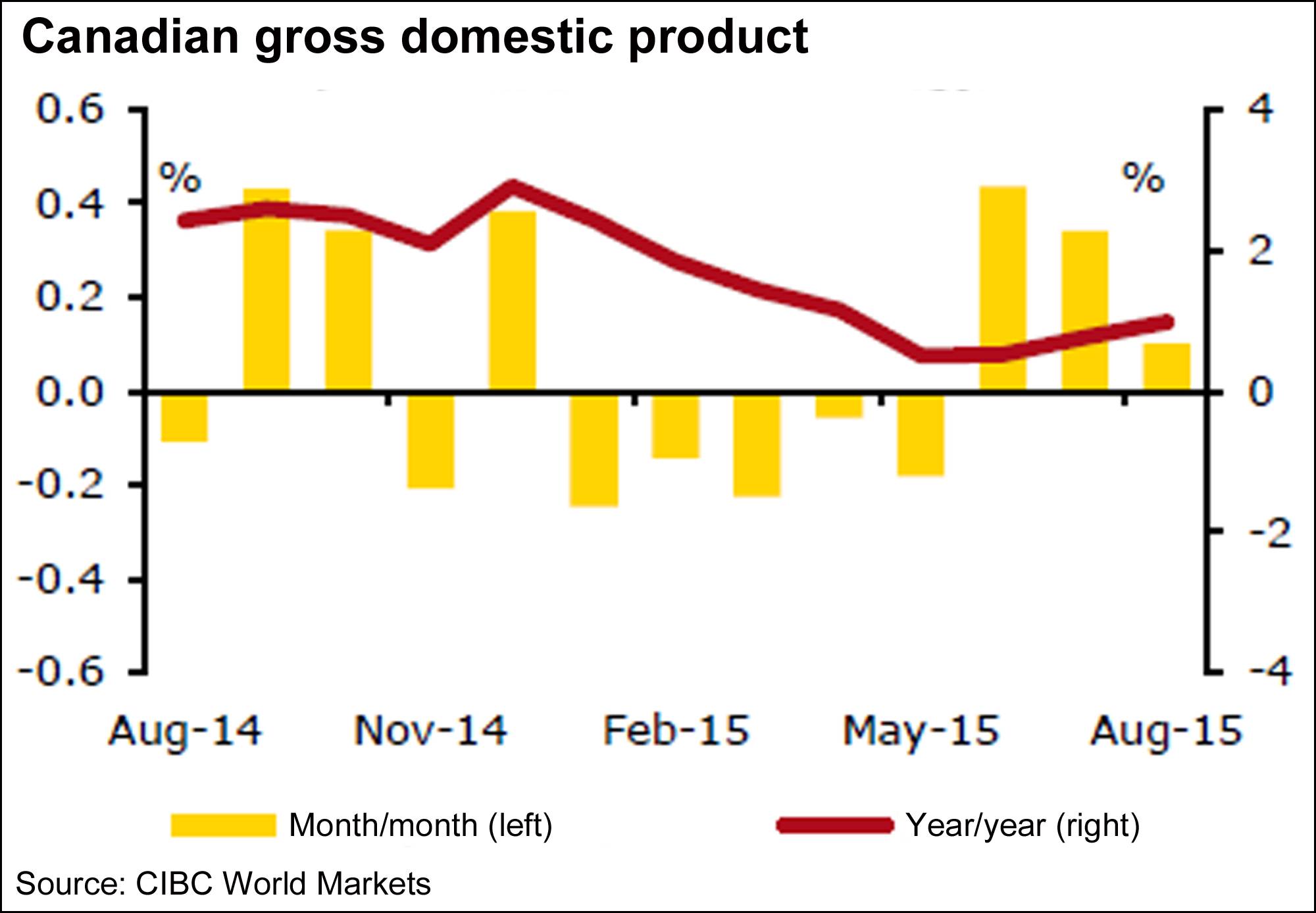 “Despite the small step backward in manufacturing, we continue to expect that the prolonged weakness in the Canadian dollar will keep the sector on the positive track that began a few months ago,” he added in a look ahead to the report, “While the full benefits are unlikely to be seen for at least a few more months, manufacturing and exports should continue to see incremental gains from the loonie’s previous depreciation.”

If the economy’s not your thing, there are earnings reports galore on tap.

Reports are expected from the likes of Centerra Gold, Merck, Pfizer, Sherritt International, Barrick Gold, Cogeco, Potash Corp. of Saskatchewan, Starbucks and Colgate-Palmolive, among others.

We’ll get a glimpse at the fortunes of the embattled oil patch, with earnings from Canadian Oil Sands, Cenovus, Husky Energy and Exxon Mobil, to name a few.

Video: We should worry more about our debts