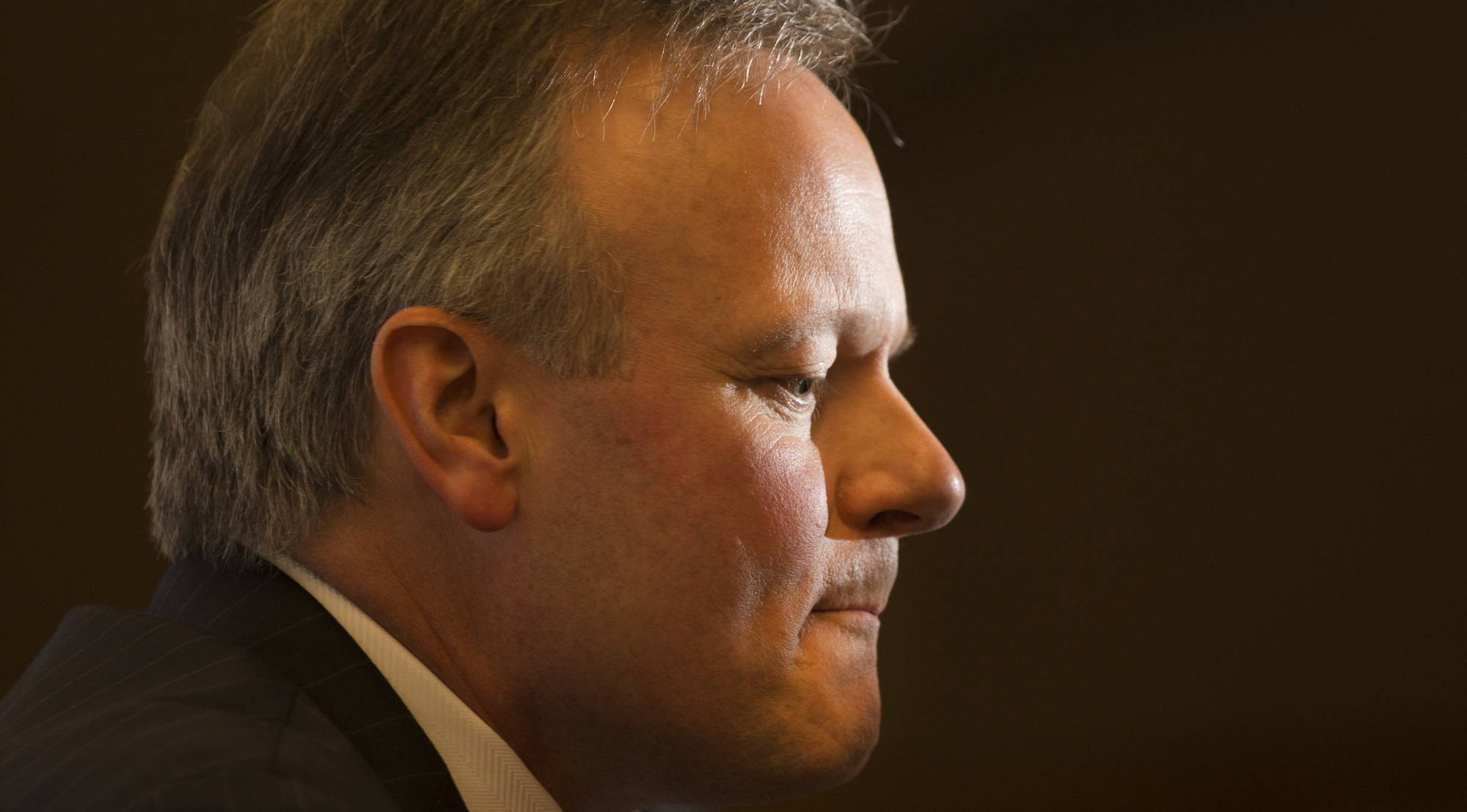 Housing and household debt are back on the radar amid speculation that the Bank of Canada could cut interest rates again.

“Timing asset market developments is not a strength of economics on the upside or downside, but it would be foolhardy to ignore the difficulty in sustaining growth off of all-time record highs in the home ownership rate, real per-capita consumer spending, house prices by every measure, household leverage, and renovation spending,” Derek Holt, vice president at Scotia Economics, warned in a recent report.

“The country’s financial system and mortgage markets are totally different than markets like the U.S. and parts of Europe and this is an important stabilizer against true hard-landing worries that we don’t believe in,” he added.

“So is an improving U.S. economy. But these points do not negate the fact that the hottest markets of Toronto and Vancouver have large and prolonged price corrections that have restrained the economy in the past despite this point, and for varying reasons over time that could all well repeat (cycle maturity, immigration shifts, rate risk, etc.).”

Mr. Holt’s report was actually about why he believes Bank of Canada Governor Stephen Poloz won’t cut rates again, and this was among the reasons.

Trimming rates again after the surprise January cut, he said, would only “risk inflaming housing imbalances,” which are already a threat cited by the central bank. 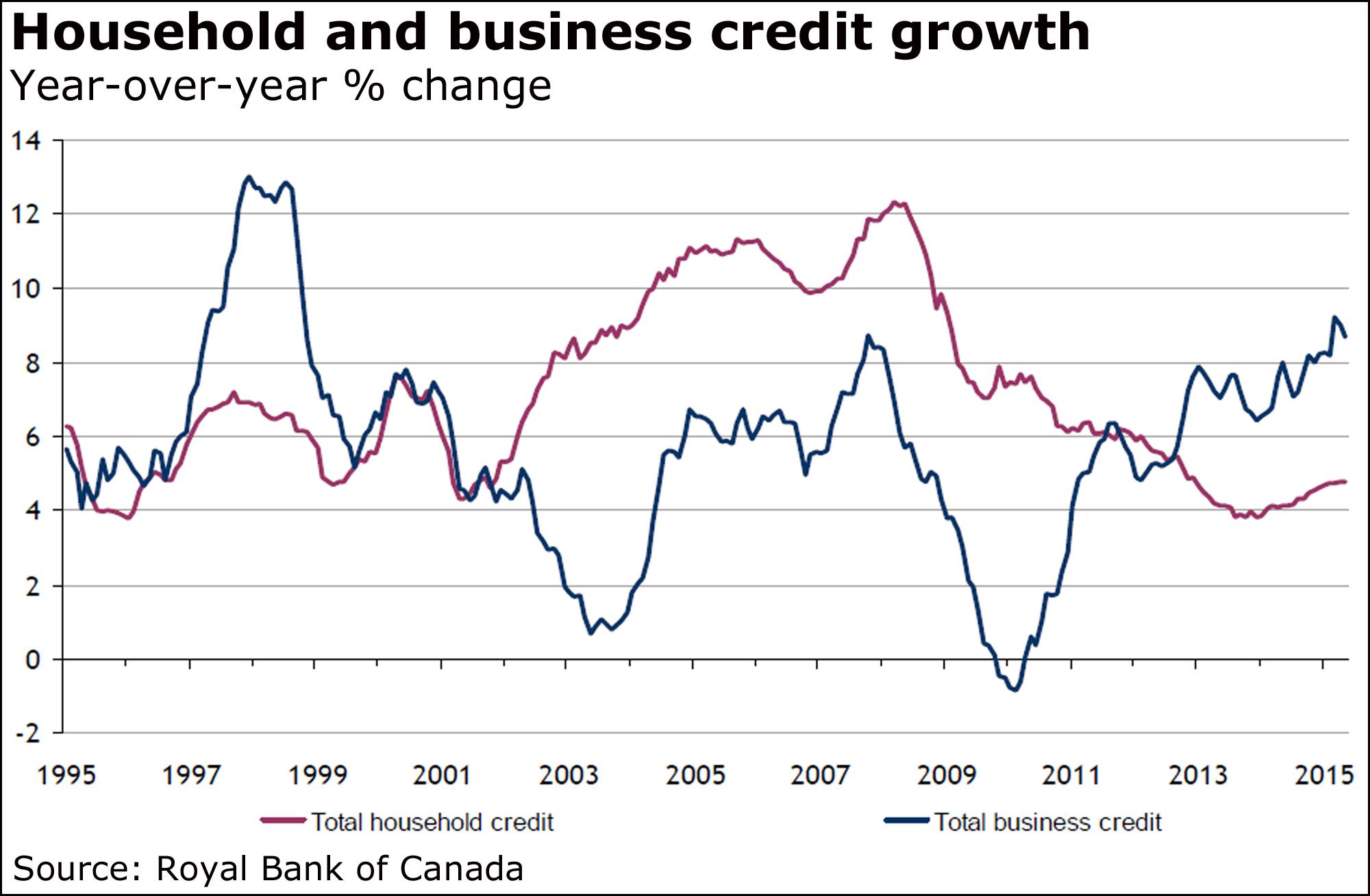 Household credit climbed 4.8 per cent in May from a year earlier, with mortgages up 5.5 per cent.

And as Royal Bank of Canada economist Laura Cooper noted, the outstanding balance is now $1.83-trillion.

Some economists believe Mr. Poloz has quite the balancing act to pull off, given the rise in household borrowing since the last rate move.

Does he buoy a faltering economy by taking his key rate down to just 0.5 per cent, or does he, as Mr. Holt suggests, refrain from stoking the debt fires?

“At its upcoming July meeting, the BoC will be tasked with balancing these stability risks stemming from rising household debt balances and offsetting the protracted weakness that is afflicting the Canadian economy,” said RBC’s Ms. Cooper, who, like Mr. Holt, doesn’t expect another rate cut, figuring Mr. Poloz will see the recent economic weakness as “transitory.”

The last cut certainly did stoke the debt fires, said chief economist Douglas Porter of BMO Nesbitt Burns, noting that the 4.8-per-cent rise in May outpaced the 3.5-per-cent rate of increase in personal income. 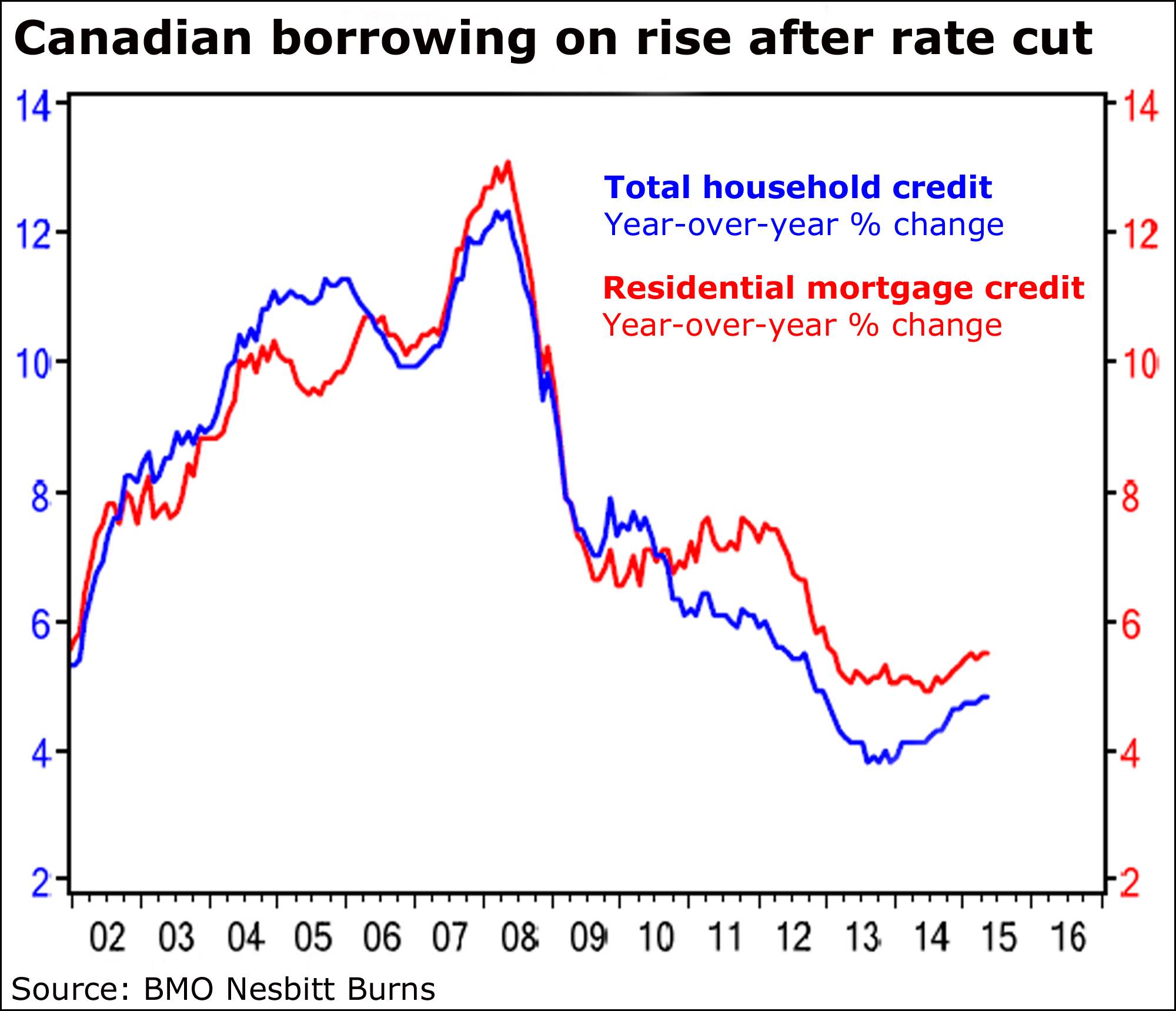 “The key point here is that Poloz is willing to live with some acceleration in household debt if the BoC believes the broader economy needs some stimulus,” Mr. Porter said.

“Combined with the weak April GDP report and the Greece uncertainty, this clearly ups the odds of a follow-up rate cut.”

Nomura Securities expects Mr. Poloz and his colleagues to cut their benchmark rate this month, while Bank of America Merrill Lynch expects it to happen in October.

That’s because both believe Canada has just come through another recession, with two straight quarters of economic contraction. That’s not a given, by the way, and others don’t necessarily see it that way yet.

But again, that’s an issue for the housing market, which Bank of America sees as “arguably one of the only bright spots” in Canada’s economy.

“Looking ahead, persistent gains in house prices and housing activity are a risk to financial stability: Canada’s residential construction sector as a share of GDP is quite high, at around 7 per cent,” Bank of America North America economist Emanuella Enenajor, rates strategist Ruslan Bikbov and foreign exchange strategist Ian Gordon said in a recent report, though they expect home prices and sales to continue climbing.

“Growth driven by interest rate-sensitive domestic demand is not a sustainable growth model for the economy, at least not one that can survive a Bank of Canada rate hike cycle.”

If William Wallace were Greek ...

Markets down, but no crisis

Global markets are tumbling today just about everywhere but for China.

But the reaction to the Greek ‘No’ vote is nowhere near panic levels.

“Following the ‘No’ vote, the chief worry is over the liquidity of Greek banks,” said analyst Jasper Lawler of CMC Markets in London.

“Markets could get soothed or agitated later on Monday when the European Central Bank announces its plans for emergency lending to Greek banks. Most likely, the ECB will try to remain as apolitical as possible by maintaining the [emergency liquidity assistance] at current levels rather than ending it or extending it based off of the referendum.” 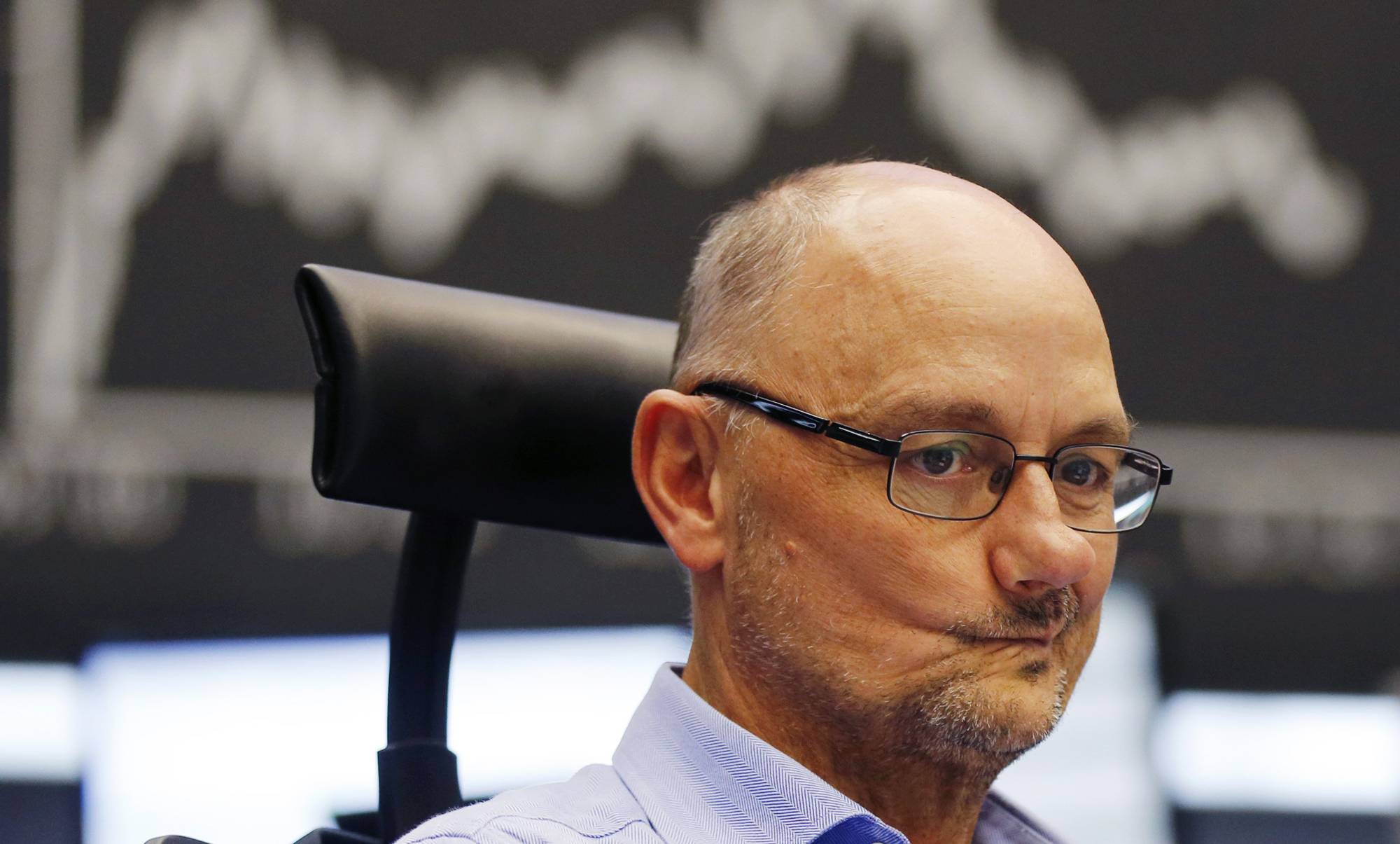 Tokyo’s Nikkei lost 2.1 per cent, and Hong Kong’s Hang Seng 3.2 per cent, while the Shanghai composite gained 2.4 per cent.

“Volatility in Chinese equities is hardly spurring bullish sentiment across global equities, even for those with no exposure,” Mr. Lawler said.

“The Chinese government instituted a plethora of stock market reforms designed to shore up confidence. Still, Chinese stocks finished well off their highs as investors scramble to use any bounce in prices to sell stocks.”

“And I shall wear the creditors’ loathing with pride.”Yanis Varoufakis

The Greek crisis entered a new and highly uncertain phase today as Finance Minister Yanis Varoufakis quit to pave the way for new negotiations between Athens and its creditors.

As our European bureau chief Eric Reguly reports from Athens, Mr. Varoufakis was a thorn in the side of the creditors, and his resignation was akin to a peace offering by Prime Minister Alexis Tsipras. 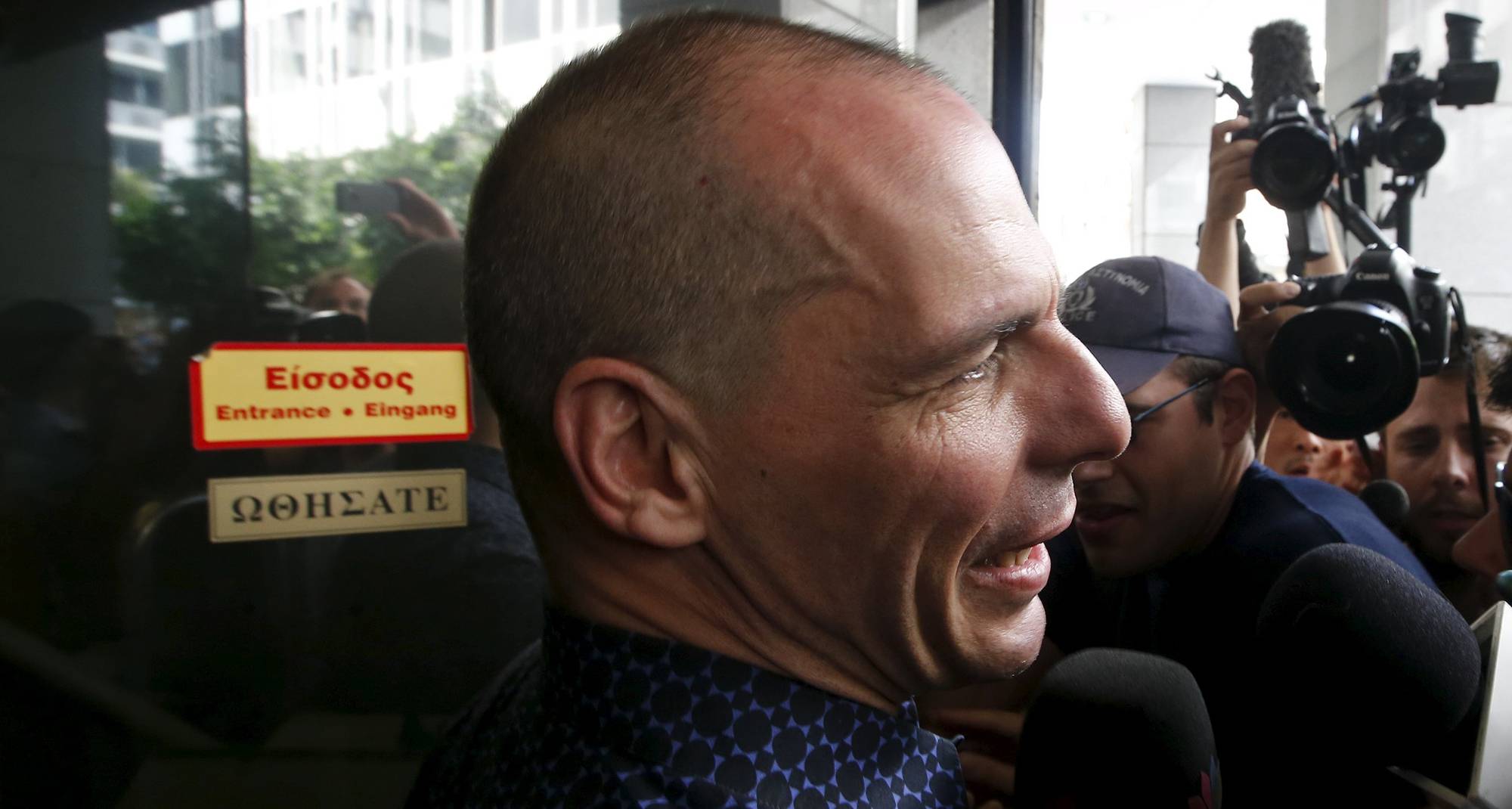 So the markets are trying to gauge what happens next.

“In many respects, we are exactly where we were a week ago as the week’s Greek referendum was a resounding success for the ‘No’ party,” said market analyst Alastair McCaig of IG in London.

“The tone of commentary from around the euro zone has not demonstrated a unified view on what this means to the ongoing status of Greece as a member nation, and as such traders are left baffled as to what happens next,” he said in a research note.

“Just to add an extra twist to the difficulties in gauging what is happening has been the decision of Yanis Varoufakis to step down as Greek finance minister. This is due to the fact that his abrasive negotiating manner could be counterproductive to any potential future negotiations.”

First, the ECB will review its emergency liquidity assistance program for Greek banks.

German Chancellor Angela Merkel is reportedly set to meet her French counterpart, and other officials are talking by phone. There’s also another emergency summit of European leaders tomorrow.

Where the markets are concerned, the odds of Greece leaving the euro zone, or Grexit as it’s known. are now rising.

“The future of Greece in the euro looks very much uncertain,” said Ipek Ozkardeskaya of London Capital Group.

“A potential return to the drachma will certainly not happen in a zen environment,” she added.

“Yet the European Central Bank could not throw Greece to the wolves. The ECB will need to back up Greece through a so-called parallel currency, to peg the potential transitory currency to the euro and to curb an outsized depreciation in case of an exit from the euro.” 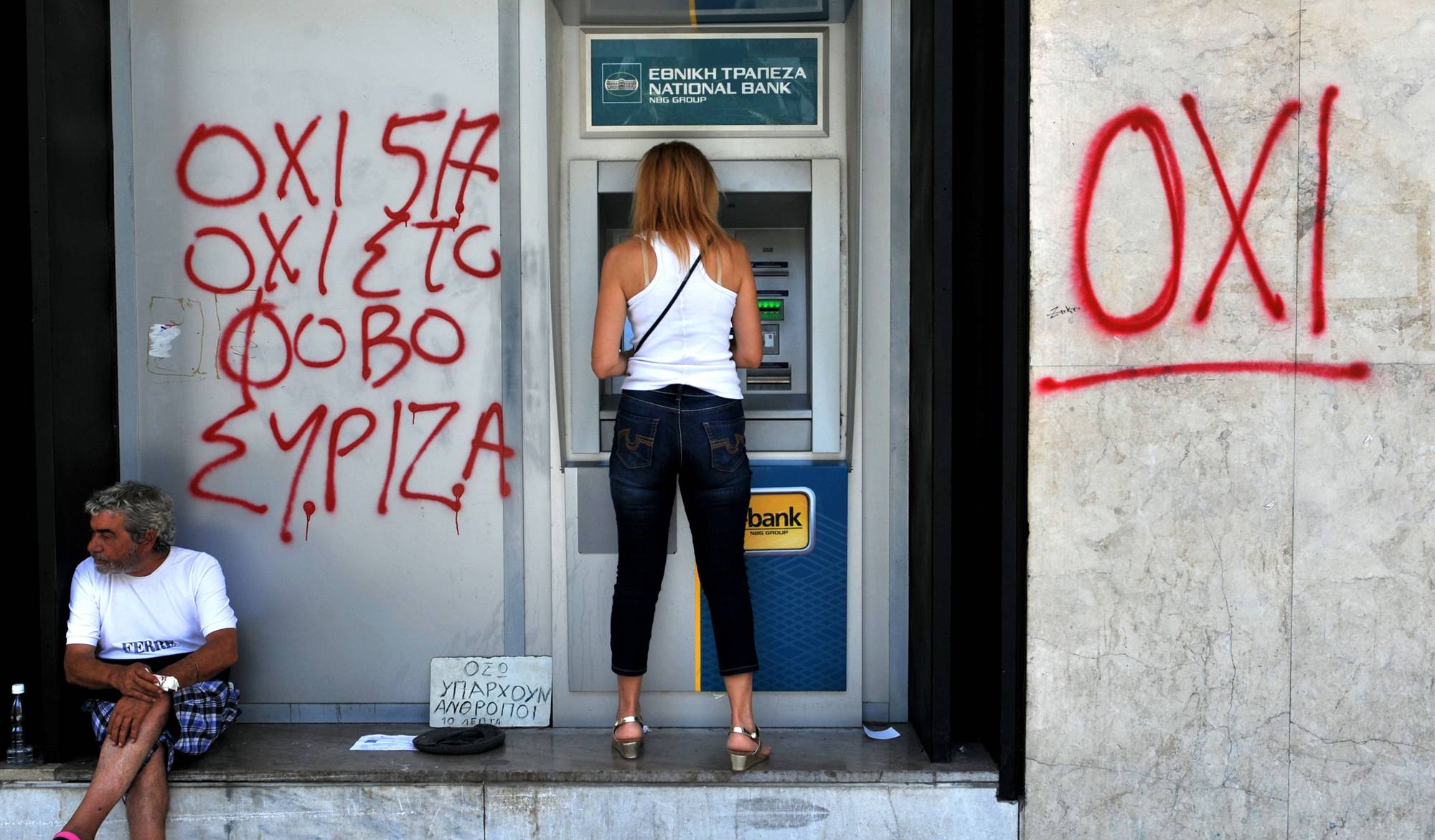 True, Mr. Varoufakis has quit and there are indications of conflict among the creditors, noted Kit Juckes, the chief of foreign exchange at Société Générale.

But he questioned whether that’s enough for lenders to go down the debt relief road.

“There are still nuances, even to topics like debt relief, where maturity extensions, etc., and muddy waters, but I struggle to see the two sides (Tsipras’ need for relief, creditors’ need to keep Pandora’s Box closed) meeting in the middle,” Mr. Juckes said.

“That’s enough all on its own to see Grexit as more likely than Grexin from here. There will be talk and at times hope, but throwing away of key principles (even flawed ones) isn’t so.”

Benchmark price for a detached Metro Vancouver home in June, up 14.8 per cent from a year earlier.

We'll get another piece of the second-quarter puzzle when Statistics Canada reports tomorrow on how exports and imports fared in May.

RBC, for one, expects to see the trade deficit narrowing again to $2.2-billion from April’s $3-billion.

TD doesn’t see it that way, expecting to see that the deficit fattened up even more, to $3.5-billion.

“A closer look at exports should reveal considerable weakness in the energy sector as wildfires shuttered production in northern Alberta,” TD economists said.

“Other export sectors should be stronger, led by non-energy commodities.”

Trying to forecast such reports is a gamble. But for what it’s worth, RBC sees no job gains, after almost 59,000 in May, and the unemployment rate holding at 6.8 per cent.

Who's to blame for Greece's 'sink-or-swim' moment?