The Canadian dollar is holding its own today, though at between 73.5 and almost 74 cents U.S. that’s not saying much.

It’s where it could be headed that will trouble Canadian snowbirds and buoy the hopes of exporters.

Several analysts have predicted ever-lower levels for the loonie going forward. But the latest from Canadian Imperial Bank of Commerce sees it tumbling to just 70 cents within the next few months.

In its new outlook, CIBC World Markets said it expects the loonie to sink to that level in the first quarter of next year before recovering.

“The loonie’s had a tough time navigating the storm this year,” the bank said in its report.

“It ranks among the worst performing major currencies against the greenback and the headwinds have yet to abate,” it added.

“The latest fall in oil prices coupled with a weak near-term economic outlook underscores our belief that near-term risks to the loonie remain skewed toward additional depreciation rather than a rebound.”

The loonie has been hit by lower oil prices and the diverging policies of the Federal Reserve, which is poised to hike interest rates, and the Bank of Canada, which is set to hold steady for months still.

And as The Globe and Mail’s Eric Reguly reports today, the chief of the International Energy Agency sees no rebound in crude, and, possibly, a further dip.

“To make matters worse, the lagged effects of the price drop haven’t fully played out and many of the benefits from a weaker exchange rate have yet to show up in a sustainable way,” CIBC said.

“While the unemployment rate has reached 7.1 per cent again, there remains scope for the labour market to deteriorate further in the months ahead - especially in provinces levered to the oil sector.”

Several embattled Canadian governments may be in for even more of a crude awakening.

Warren Lovely of National Bank Financial has taken a fresh look at the fiscal hit to Ottawa and some of the provinces in his latest study of government finances, warning that some assumptions are probably still too optimistic. 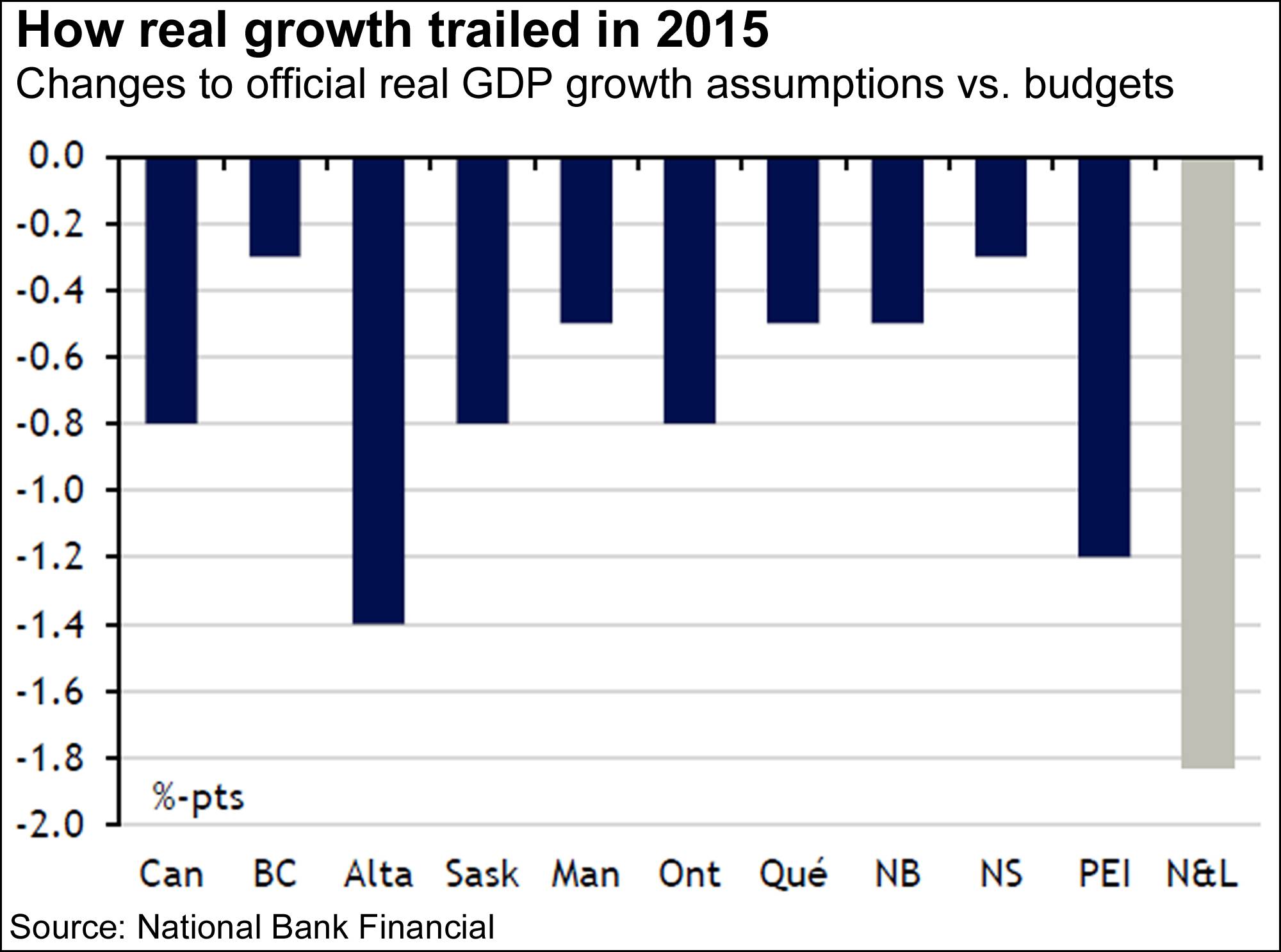 “Clearly, nominal growth isn’t nearly as ugly in non-oil-levered jurisdictions,” he added, referring to those provinces not shocked by the collapse in crude prices.

“But don’t kid yourself, nominal GDP – the best proxy for own-source revenue – hasn’t lived up to expectations pretty much everywhere one looks. Moreover, we’d generally characterize future year growth assumptions for nominal GDP as too bullish, reliant on a significant improvement in real growth and notable reflation in oil.”

By own-source revenue, he meant tax revenue earned in the provinces before federal transfers.

Mr. Lovely questioned the outlook for Ottawa, whose revenue outlook is already shaky and, thus, “creating a growing fiscal headache for the newly minted Liberal government.”

He cited not only the trouble since last April’s budget, but also Finance Minister Bill Morneau’s latest admission that the cost of the Liberal tax changes will come to $1.2-billion a year. Add to that, the infrastructure spending the government has pledged.

Among the provinces, of course, troubles largely relate to Alberta, Saskatchewan, and Newfoundland and Labrador, whose finances together will amount to $8-billion in deficits in the 2015-16 fiscal year. 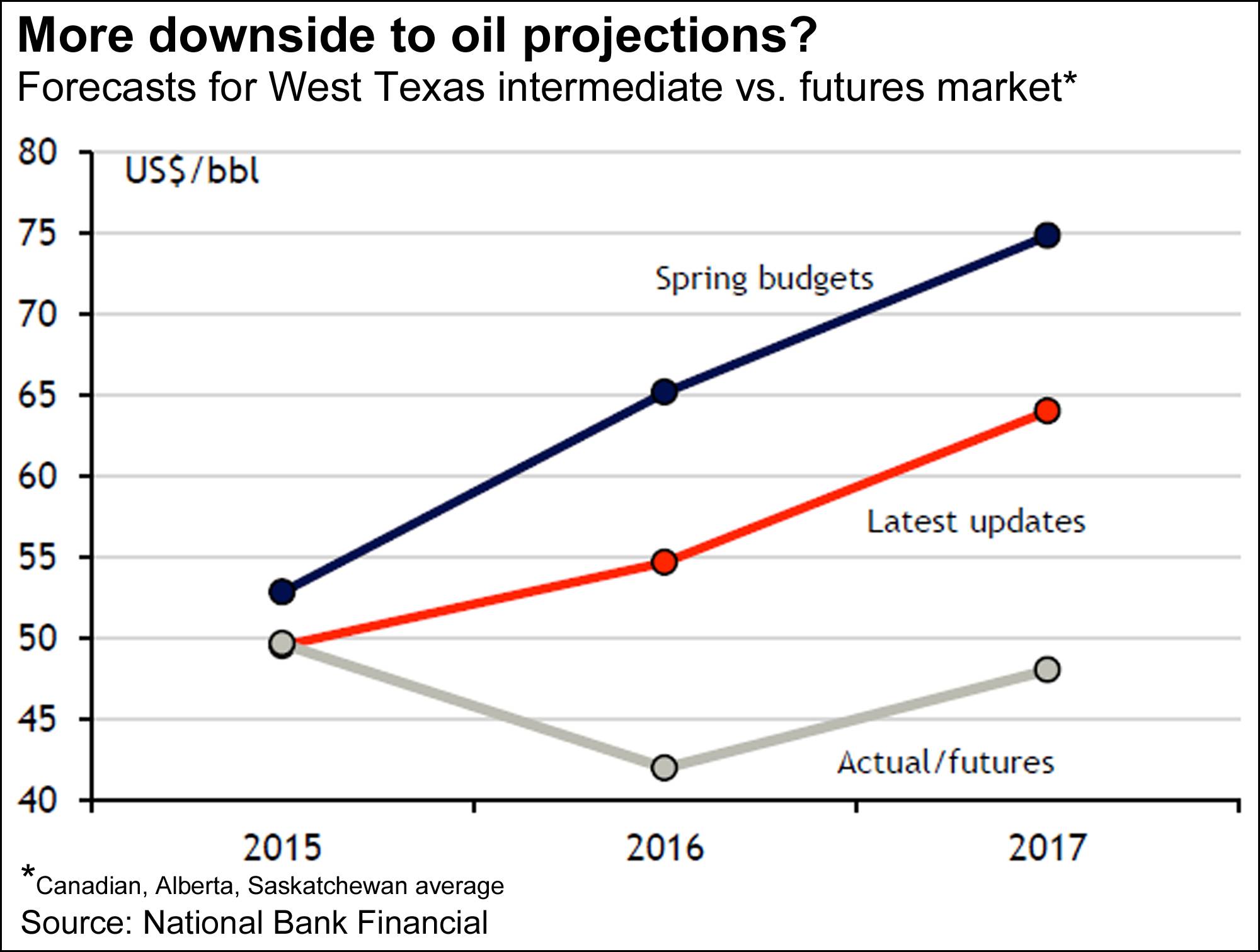 “Should oil prices fail to deliver the hoped-for recovery, we estimate that a further $3-billion-plus of annual provincial oil royalties risk going [missing in action], all else equal,” Mr. Lovely added, noting that the three oil regions will, for the first time in at least 25 years, have a collective budget balance worse than the remaining provinces.

As for the overall economy, he said, “one might fairly characterize 2015 as landing somewhere between ‘challenging’ and ‘disastrous,’ depending where you happen to reside.”

Lululemon Athletica Inc. cut its profit forecast for the year as it posted a drop in third-quarter results today, sending its shares tumbling.

Chief executive officer Laurent Potdevin called today’s results a “solid quarter” as he unveiled a quarter profit of $53.1-million (U.S.), or 38 cents a share, down from $60.5-million or 42 cents a year earlier.

Lululemon projected fourth-quarter earnings per share of 75 cents to 78 cents, and revenue of $670-million to $685-million.