The federal government is flatly refusing to alter a controversial wireless market strategy that corporate Canada has warned would disadvantage domestic carriers while benefiting large foreign players such as Verizon Communications Inc.

Industry Minister James Moore made it official Wednesday, releasing a statement that makes it clear the Conservative government will not change its plans to spur competition by granting special privileges to new wireless sector entrants regardless of their size.

The minister and Prime Minister Stephen Harper have been the targets of a high-profile public campaign by the major Canadian wireless companies, which have pleaded with Ottawa to reconsider its policies for attracting a fourth wireless player in all regional cellphone markets.

The Big Three incumbents – BCE Inc., Rogers Communications Inc. and Telus Corp. – are alarmed because deep-pocketed Verizon, which says it's considering expanding into Canada, would be able to take advantage of special rules that they say they believedwere reserved for small players. These include the right to buy more licences for the valuable 700 megahertz spectrum than major incumbents in a January, 2014, auction and the right to purchase small Canadian firms' spectrum licences, even though these companies are currently off limits to big domestic players.

The Canadian Council of Chief Executives – representing 150 leading CEOs from all industrial sectors – has also joined the call for change.

Mr. Moore, however, remains unmoved. "Our policy has been clear and remains unchanged: Greater competition and liberalized investment has meant more choices at lower prices for Canadian families," he said.

"We will continue to stay the course by ensuring Canadians benefit from a competitive telecommunications industry."

Incumbents warn ordinary Canadians would be disadvantaged by Verizon's entry under the current rules. Specifically, they warn of job losses, hits to pension plans and reduced investment in rural areas. Shares of the major wireless companies have dropped sharply since The Globe and Mail reported Verizon's potential interest in entering the Canadian market, which Verizon later confirmed.

In addition to participating in the upcoming spectrum auction, Verizon is mulling purchases of Wind Mobile and Mobilicity, two start-up carriers that incumbents are barred from purchasing.

The Conservative government embraces consumer-friendly policies such as lower cellphone bills as a way to attract votes.

Privately, government insiders say they are unfazed by attacks from BCE, Telus and Rogers – including entreaties from BCE CEO George Cope – because they believe Canadian consumers have little love for Canadian wireless firms.

BCE Wednesday said it's baffled as to why the Conservatives would reject its concerns.

"We certainly agree that competition is a good thing. We welcome it. But we're astonished the minister didn't address the loopholes that give start-up advantages to giant U.S. wireless incumbents. Given the significance of the issue to a critical Canadian industry, to rural wireless deployment, to the wide range of Canadian groups and individuals that have expressed concern, it's truly perplexing that the government is ignoring the issue," said Mirko Bibic, BCE's chief legal and regulatory officer. BCE owns 15 per cent of The Globe and Mail.

Mr. Moore said the government's wireless policy should not come as a surprise.

"Our government's telecommunications policy was not created overnight. It is the result of a vigorous consultation that started in 2008 and continues today. All players – industry, consumer groups and everyday Canadians – contributed to this policy," he said.

The minister, whose government cites its consumer-first telecom policies when political fund-raising, trumpeted the Tory record on phone bill rates.

"Since 2008, our government has introduced new policies to increase competition in our telecommunications industry. The result has been greater choices at lower prices for Canadians. In fact, our actions have driven down the average cost of wireless services by nearly 20 per cent," Mr. Moore said.

Ken Engelhart, senior vice-president of regulatory affairs at Rogers, said the industry plans to appeal to Canadians' "fundamental sense of fairness" to try to build momentum for policy change in Ottawa.

"How does it really make any sense to say Verizon can buy two blocks of [700 MHz] spectrum and Rogers can only buy one? I just don't think they've ended up in a logcial, commonsense place and I think Canadians need to hear about that." 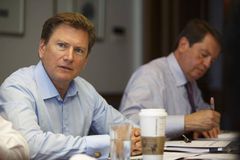 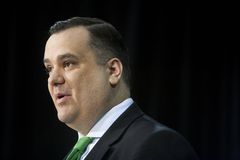