Surging Toronto meal-kit delivery firm Chef's Plate Inc. says it's on track to hit $50-million in sales this year and is eyeing an initial public offering as early as 2018.

On Wednesday, the company, one of Canada's fastest-growing startups, will announce it is expanding to Quebec and eastern Canada following a similar move west last June, making it the only coast-to-coast operator in Canada's fledgling, but increasingly competitive, e-commerce grocery delivery space.

Chef's Plate has sold more than two million meal kits – a collection of ingredients sourced from farms near its distribution centres and shipped to online customers in refrigerated boxes with preparation instructions – since launching operations two years ago. After saying last June that it had reached 100,000 meal-kit deliveries a month – servings cost between $9.75 and $10.95 each – Chef's Plate is now believed to be about three times that size, though the company declined to provide details.

With its move east, Chef's Plate, with 200 employees and facilities in the Toronto and Vancouver areas, will enter the turf of GoodFood, a Montreal-based meal-kit company founded in 2014 that delivers more than 200,000 meals monthly in Quebec and Ontario. Berlin-based industry giant HelloFresh AG, which entered Canada in June, also operates in all provinces but Quebec. HelloFresh doesn't break out regional sales, but delivers more than seven million meals monthly across nine countries.

"We see a significant runway" for the meal-kit delivery business in Canada, said Ian Brooks, managing director of HelloFresh Canada. "The value proposition resonates with Canadians. I think everyone is growing and doing well in this market." He noted online sales account for less than 1 per cent of the $90-billion Canadian grocery market, well below levels in the United States and United Kingdom.

The meal-kit business has become one of the most active emerging technology-enabled industries globally, forecast to grow to $10-billion (U.S.) in sales by 2020 from $1-billion in 2015 by research firm Technomic.

But some have run into concerns they are spending too heavily on marketing to fuel expansion; both HelloFresh and New York-based BlueApron Inc., delayed IPO plans in 2015 and 2016, respectively, after amassing annual revenues of hundreds of millions of dollars each.

One research firm, 1010data, found most U.S. customers who join meal-kit services drop them within six months – a finding disputed by the companies – while NPD Group found just 3 per cent of U.S. adults had tried the services. The industry, with an estimated $1.5-billion in annual sales in the United States, is far from posing a threat to established grocery giants, some pundits have said.

Chef's Plate and its backers say they're mindful of not pushing for growth at all costs, and the firm has focused on building out its technology, infrastructure and supply-chain logistics. "We're working hard to get the economics right," before an IPO on the Toronto Stock Exchange, likely in 2018 and "for sure within the next 24 months, Mr. Shea said.

Technology IPOs have been scarce in Canada, but several upstart Canadian consumer-oriented firms have taken the public route of late, including Freshii Inc., Aritzia Inc. and Canada Goose Holdings Inc., which filed its prospectus with regulators in the United States and Canada this month. Meanwhile, some e-commerce merchants, notably Dollar Shave Club, which was bought by Unilever last year for $1-billion (U.S.), have generated huge sales and returns for private shareholders.

Mr. Black, who played an integral role in helping Chef's Plate set up, said: "I'm a big believer that building successful businesses requires building rock solid foundations and delighting customers. We have done that with Chef's Plate and paid attention to all the small details to make sure we got them right." He added the company should reach operating profitability in the "near term."

Hannes Blum, a Victoria, B.C.-based venture partner with Acton, said "what we really like about the team is they're not falling into that trap" of overspending. "They are very disciplined in acquiring customers and ensuring they are building their operations frugally but delivering great products."

Mr. Shea noted, "This business doesn't need a lot of customers to make it a really big business" as long as they keep coming back. "We are into a retention game." 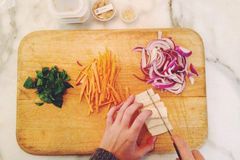