The Ontario government's 2006 growth plan for residential land development has spurred soaring increases in house prices in the Toronto region by limiting construction of new low-rise family homes, according to a report to be released Tuesday.

While the number of housing units built in the Greater Toronto Area over the past decade has roughly tracked the increase in population in the region, there has been "a marked mismatch" between the types of units completed and the types demanded, according to the report from the Centre for Urban Research and Land Development at Ryerson University in Toronto.

Demand for low-rise homes – especially detached homes – has not been matched by new supply, while the supply of condominium units has soared, the report says. The result has been major price inflation in all types of "ground-level" homes, including townhouses, semi-detached and detached homes.

Read more: The housing fix: Will it stick?

Frank Clayton, senior research fellow at the Ryerson research centre, said soaring prices in recent years can be directly traced to the new development policy adopted by the province's Liberal government in 2006 for the "Golden Horseshoe" region around Toronto.

The growth plan was aimed at encouraging denser development in the Toronto area and reducing the environmental impact of urban sprawl, but Dr. Clayton argues it has had the unintended consequence of driving prices higher by creating scarcity.

He said the province's policy assumed more people would be willing to live in high-rise developments if they were built in transit-accessible areas, even though forecasts at the time suggested a large majority of housing would still need to be ground-level family homes.

"It's one thing to pursue an environmental objective on something, but don't deny you're having an impact on house prices, and that's what they did," Dr. Clayton said in an interview.

According to the Ryerson study, estimates of housing demand prepared by a consulting firm – which were adopted by the province for the 2006 growth plan – forecast ground-level housing should account for 70 per cent of new housing development between 2001 and 2011, and 68 per cent between 2011 and 2021, to meet anticipated demand.

Construction was close to the forecast for the first decade, the report says, because many projects were already under development when the plan took effect in 2006. But during the five years from 2011 to 2016, only 46 per cent of new units were ground-level, a shortfall of 22 percentage points from the original recommendation, the report says.

Dr. Clayton said the province's latest plan announced Thursday to curb price growth in the Toronto region will not do enough to encourage supply because "it's all about apartments" and very few of the measures are aimed at boosting new home construction. Many measures unveiled last week are targeted at encouraging builders to construct rental apartment units, including a $125-million program to rebate development charges and reduced municipal property taxes for rental buildings.

The Ryerson report comes as the Building Industry and Land Development Association (BILD), which represents developers in the Toronto region, issued a report Friday showing a record-low inventory of low-rise homes for sale in the GTA.

At the same time, builders sold a monthly record 4,500 condo units in the GTA in March, up 127 per cent from 1,981 units sold in March last year. Including condo units, there were 10,153 new homes available for sale in builders' inventories at the end of March, a 50-per-cent decline from 21,006 units in March last year.

BILD president Bryan Tuckey said the decline in new housing inventory is "a direct reflection" of how hard it is for developers to bring product to the market.

"The hurdles builders face keep getting higher," he said in a statement. "There are ongoing major challenges with a lack of serviced and permit-ready developable land and out-of-date zoning bylaws. The complexity and time it takes to get the vast numbers of approvals and permits necessary to build have increased dramatically in recent years."

Mr. Tuckey said the scarcity of single-family homes is "telling us very clearly that not enough new housing and not the right mix of new housing" is being built to keep up with consumer demand. 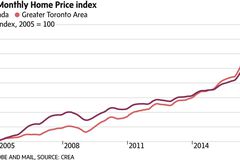 Ontario’s housing fix: Why the impact may be short-lived
Subscriber content
April 22, 2017 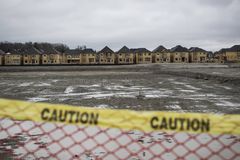 GTA’s housing price average topped again as detached home prices soar
March 3, 2017
Follow Janet McFarland on Twitter @JMcFarlandGlobe
Report an error Editorial code of conduct
Due to technical reasons, we have temporarily removed commenting from our articles. We hope to have this fixed soon. Thank you for your patience. If you are looking to give feedback on our new site, please send it along to feedback@globeandmail.com. If you want to write a letter to the editor, please forward to letters@globeandmail.com.
Comments