Torstar Corp.'s shift toward digital publishing continues to grind through a painful phase, as the newspaper publisher's first-quarter loss ballooned to $53.5-million and advertising revenue continued to steadily decline.

Revenue at Torstar fell 13.5 per cent and company executives said they are not expecting much improvement in that trend in the balance of the year as the market for print ads, which still make up 45 per cent of the company's revenue, continued to weaken.

Torstar is banking on its Toronto Star Touch tablet app and a revamped website for its flagship Toronto Star newspaper to boost digital revenue, but the company has conceded that readers have been slower to adopt the new tablet edition than expected. Company executives did not disclose how much ad revenue the app is contributing.

The company's chief executive officer, David Holland, was also at pains to convey that the steep first-quarter loss resulted in large part from temporary charges related to the company's restructuring, including amortization and depreciation expenses from its purchase of a 56-per-cent stake in niche online publisher VerticalScope for $180-million and its decision to close its printing plant in Vaughan, Ont.

"We do not see this first-quarter earnings performance, relative to prior year, as being indicative of our full year," Mr. Holland told analysts on Wednesday.

Even so, Torstar's stock price, which was $7.09 on the Toronto Stock Exchange a year ago, fell nearly 6 per cent on Wednesday to close at $1.90.

With a plan on track to outsource printing of the Toronto Star to Transcontinental Inc. starting in July, Torstar is working to sell the Vaughan plant. The company said in January it would cut 220 full-time and 65 part-time jobs from the facility, and at the same time, the Star slashed 13 newsroom jobs and 15 more in circulation. Then, at the end of January, Torstar closed The Guelph Mercury, which had been one of Canada's oldest newspapers.

"We are making some very hard decisions on costs," Mr. Holland said at Torstar's annual meeting, held on Wednesday morning. "These are painful moves." Chief financial officer Lorenzo DeMarchi told analysts the company is projecting another $20.7-million in cuts by the end of the fiscal year.

The number of readers opening the free Star Touch app each day and week "have remained stable," Mr. Holland said, after announcing that the app was being opened 26,000 times daily in early March. That's with Torstar investing $5.1-million on the app during the first quarter, mostly on marketing, with plans to spend another $5-million for the rest of 2016. The Star's revenue from subscribers fell 2 per cent in the quarter.

"We continue to believe that the tablet can be an important part of the Star's broader multiplatform offering to its customers," Mr. Holland said.

In Star Media Group, the division that publishes the Star and the free Metro dailies, revenue was down 15.9 per cent, mostly because of lower national advertising revenue, although results were made worse by one-time effects from the closing of digital marketing firm Olive Media and the loss of $1.4-million in commercial printing revenue at the Vaughan plant.

The underlying results were "slightly weaker than expected," Drew McReynolds, an analyst at RBC Dominion Securities, said in a research note.

The company's loss from continuing operations of 66 cents a share compared with a loss of $500,000, or 1 cent, in the same quarter last year. Amortization and depreciation had a 52-cent-a-share effect on the first-quarter results.

Wednesday's annual meeting marked the official departure of publisher John Cruickshank, with Mr. Holland taking over his duties "for now." At the gathering, two individual shareholders raised concerns with the company's lacklustre performance, with one concluding: "Let's try and have a better year." 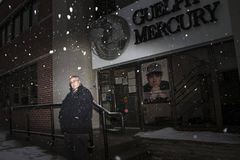 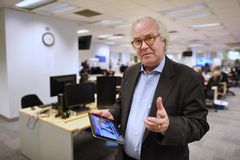