A free-trade deal that opens a small part of the Canadian dairy market to cheaper foreign imports could spell the beginning of the end for the country's dairy supply management system, and push inefficient farmers out of business, observers say.

The Trans-Pacific Partnership (TPP) deal, a trade pact among 12 countries including Japan, Vietnam and Australia that was reached in Atlanta on Monday, will give foreign dairy producers access to 3.25 per cent of the Canadian market while increasing duty-free access for Canada's agricultural exports.

The deal was welcomed by large swaths of the agriculture sector, including pork and beef producers and grain farmers, who expect to see new demand for their goods overseas. But the negative effects are expected to be disproportionately felt by Canada's dairy farmers, who face the prospect of cheaper foreign competition and the gradual erosion of prices paid by the large food companies that make cheese, butter and milk.

The deal is accompanied by $4.3-billion in federal subsidies aimed at softening the blow to dairy, chicken and egg farmers. who have enjoyed price and market protection for decades, including $2.4-billion intended to cover lost income from the TPP and an expected trade deal with Europe and $1.5-billion to compensate farmers for loss in value of their business if they exit and sell their quotas. When the European deal is signed, dairy farmers are expected to see a total of 5 per cent of their market taken by foreign milk.

Bertrand Montel, an independent agriculture consultant in Montreal, said the TPP will force milk prices down over time and either encourage or force inefficient dairy farmers to quit the business.

"I can't help but think it's a transition fund in disguise to phase out supply management in 10 or 15 years," Mr. Montel said. "I think the intention is to make a strong incentive for small inefficient dairy farms to exit. They will know they can exit with a guarantee on the quota value. I don't think the income support will be enough to maintain a small farm, so at one point they will just do the math and say it is better to exit now. I would say in two to three years, we will see the exit rate of dairy farmers increasing, especially in Quebec."

Canada's dairy supply management system has been in place for decades and was designed to protect farmers from price volatility. Critics say it forces Canadians to pay more for milk and cheese than consumers in other countries, and makes unaffordable the cost of buying quota and starting a dairy farm.

The dairy industry notes the supply management system is not a direct subsidy, and involves no taxpayer money. But Mr. Montel said the government programs worth $4.3-billion unveiled on Monday take away that argument.

Simon Giard, a dairy farmer in Saint-Hyacinthe, Que., said the increased market access given to foreign producers would make a dent in the bottom lines of Quebec farmers. "We avoided disaster but this is going to hurt," Mr. Giard said. He lamented the instability caused by putting supply management on the table every time a trade deal is negotiated.

"It's unbearable," he said.

The Dairy Farmers of Canada did not respond to interview requests. In a press release, the group said it is "disappointed" the agreement will give foreign dairy producers access to the 3.25 per cent of the domestic milk market, but called the compensation package fair.

"The milk displaced by this agreement will never be produced in Canada, and will result in perpetual lost revenue for our farmers, and for the Canadian economy," the statement said. 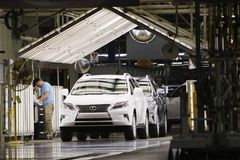