The Atlantic Canadian media landscape has shifted after the purchase of 28 Transcontinental Inc. media properties by the family-owned Chronicle Herald.

"It gives us people on the ground in over 30 communities in Atlantic Canada," says Mark Lever, SaltWire's president and chief executive officer.

As a privately held company, long held by the Dennis family, the Herald's finances are not reported publicly and the cost of the acquisition is confidential. The deal comes at a time when newspaper publishers are posting declining print revenues and online revenues that are not increasing quickly enough to act as a counterbalance. Publishers are attempting to stem losses through buyouts, layoffs and outsourcing. Mr. Lever says the new independent and privately held company hopes to achieve cost synergies by integrating the various news outlets with the Herald under one parent company.

While the Herald has had a working relationship with Transcontinental in the past, Mr. Lever confirms the deal came together from conception to closing only within "the last 3 or 4 months."

The acquisition comes in the midst of tumult at the Herald, Canada's largest independent daily newspaper, where newsroom employees have been on strike for 16 months.

"We were told that the Herald's demise was imminent if it didn't immediately cut wages and other benefits to newsroom staff," said Ingrid Bulmer, president of the Halifax Typographical Union, in a press release. "Apparently, that was a total fabrication. The company is not struggling but is instead planning to expand."

SaltWire will be acquiring the 12 separate collective agreements of these new employees, Mr. Lever told The Globe and Mail. "All the 650 [TC Media] employees are receiving employee offers from SaltWire Network," Mr. Lever said when reached by phone.

According to Katherine Chartrand, senior director of corporate communications for Transcontinental, the employees are a mix of union and non-union members.

Unifor, the country's top media union, represents around 80 people at the St. John's Telegram – the largest newspaper acquired in the sale. Lana Payne, Unifor's Atlantic regional director, says that one of the paper's two collective agreements expires at the end of May and notice was served to bargain before the acquisition.

"Obviously that's a concern," she says, "Going to the table with an employer that has [the Herald's] record."

Mr. Lever says there is no connection between the strike at the Herald and the acquisition and that he's confident a deal will be reached.

"We'll go back to the table just as soon as the union is prepared to talk about an offer that is future-looking as opposed to being stuck in the past," he says.

At the same time, he has sought to allay concerns over the concentration of ownership.

Mr. Lever says because readers get their news from so many different sources, local and otherwise, media has never been as fragmented.

"I don't feel there is a concern about concentration here," he says.

"The East has suffered from a lack of diversity of newspaper coverage for so long," she says. "This is just one more step." 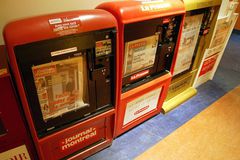 Transcontinental looks to cut costs to offset lower ad, newspaper volumes
December 6, 2016
Torstar turns to a marketing guru as its new CEO
March 3, 2017
Follow us on Twitter @globebusiness Opens in a new window
Report an error Editorial code of conduct