The federal government is expressing reservations about providing financial aid to struggling plane maker Bombardier Inc. without changes to the company's corporate governance and leadership.

Federal officials are privately telling reporters the government of Prime Minister Justin Trudeau is concerned about how Bombardier is run, particularly the company's ownership structure that gives its founding family control of the company through a special category of multiple-voting shares.

There is a feeling that Bombardier should loosen the family's control or make other changes beyond what it has already done to prove it is willing to assume its fair share of the risk in exchange for the government aid it is seeking, one source said. The source suggested that unlike Bombardier's $1-billion (U.S.) investment from Quebec for its C Series jet program, federal aid would not come without further compromises or sacrifices from the company.

Bombardier last year brought in a new chief executive officer, Alain Bellemare, to lead a turnaround effort as the maker of planes and trains struggles to get the C Series to market and win new aircraft orders under $9-billion of debt. Former CEO Pierre Beaudoin, grandson of Bombardier's founder, stepped into the role of executive chairman. Mr. Bellemare has assembled a completely new management team.

The company has also made tweaks to governance. As a concession to the Caisse de dépôt et placement du Québec, which is making a $1.5-billion investment in Bombardier's train business, Bombardier agreed to maintain a $1.25-billion minimum cash reserve at all times and give the pension fund a say in the nomination of new directors.

While the government is concerned about governance at the plane maker, sources said it has made no demands on the company for any governance changes. Bombardier is pressing the Canadian government for $1-billion in aid, a well-placed source has said, as a match for Quebec and a way to send a signal to the market that Canada will stand behind the company.

"There has been no request made one way or the other to Bombardier" on governance, a senior federal official said. "What we have on the table now is the deal they put forward and we haven't gotten back to them. … We haven't asked them anything at this point. We are still looking at their proposal."

Mr. Bellemare met with federal Economic Development Minister Navdeep Bains on Nov. 18 about the assistance. The company is looking for a response as soon as possible, saying a positive answer from Ottawa would give it almost immediate traction in C Series sales campaigns.

A perception remains in the industry that while Bombardier has made an effort to clean house and improve its management, it hasn't gone far enough to ensure its long-term survival.

"The general perception is that the Beaudoins, for all their success in the past, made just one series of bad decisions when it came to the C Series approach and strategy," Scott Hamilton of aviation consultancy Leeham & Co. said. "And that fell under Pierre's watch as CEO. If you have a company that is essentially bankrupt, and that is how the market is treating the company, you have to have some radical changes to move beyond that."

Investors and industry experts have for years called on the company to scrap its dual-class share structure, arguing that the company would command much more interest from capital markets if the family loosened its grip. Bombardier has consistently rejected that view, saying the structure provides stability to a business that is highly cyclical.

And there is no evidence that the family is willing to give up control.

Some industry observers point out that the dual-class shares are in fact protecting the company from a foreign takeover, which would be made easier as the company's stock price has fallen below $1 (Canadian). They note that a buyer would likely break the company up, creating a political and economic crisis for Canada's aerospace sector as the effects ripple to suppliers and other companies.

With the C Series, Bombardier is making its biggest bet ever. The airliner is going up against the smallest jets made by industry giants Airbus and Boeing, which have pushed back hard against the newcomer with discounts supported by higher assembly line volumes. Both rivals benefit from significant support from their home governments in Europe and the United States. 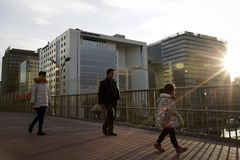 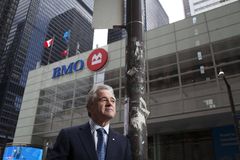