Joo Kim Tiah takes a breather during a hectic day, reflecting on the long journey to get to the controversial grand opening of Trump International Hotel & Tower Vancouver.

The president of developer Holborn Group is doing some inspections as workers put the finishing touches on the 63-storey high-rise.

U.S. President Donald Trump, who visited the site as a businessman as it began construction in 2013, predicted back then that the luxury condo and hotel tower bearing the Trump name would be a "fantastic success."

Fast forward to 2017, and Mr. Tiah is preparing to welcome two of Mr. Trump's sons – Donald Jr. and Eric – to ceremonies on Tuesday that will mark the $360-million building's official opening.

"It's taken too long actually, but I'm very excited," Mr. Tiah told The Globe and Mail, as he stood on the front steps, with the TRUMP sign above his head. "My vision is all coming together, so I'm very happy."

Mr. Tiah, 37, is also chief executive officer of Malaysia-based TA Global Berhad, which owns the tower that it jointly developed with Holborn. He comes from one of Malaysia's wealthiest families – his parents are TA Global's co-founders.

The manager for the 147-room hotel is the Trump Organization. The U.S. President recently handed over control of the company to his sons.

"We are pacing ahead of our budget in terms of hotel bookings. It has been very positive – not just people from overseas but even locals," Mr. Tiah said.

The Trumps are proud of their hotel-management licensing agreement with Holborn, though for many Vancouver residents, the Trump brand name is an unwelcome addition to the downtown skyline.

Back in late 2015, during Mr. Trump's quest to become the Republican presidential nominee, civic leaders began lobbying Mr. Tiah to drop the Trump label from the condo and hotel building. Vancouver Mayor Gregor Robertson has described Mr. Trump as "hateful" for his comments about Muslims and Mexicans, while another local politician said the high-rise would be a "beacon of racism."

Mr. Tiah is undeterred by critics. "I guess that I can understand. I can see their point of view. But we make it very clear that we're here to open a hotel, the best hotel," he said. "There is a big difference between politics and business, and we just don't get involved with all that stuff. It has nothing to do with us."

The twisting tower, designed by late Canadian architect Arthur Erickson, is targeting wealthy clientele. A high-end Chinese restaurant, Mott 32, has a menu with decadent offerings such as braised whole dried fish maw with oyster sauce for $880 and whole suckling pig for $395. In the third-floor nightclub called Drai's, a swimming pool will be covered during evenings to serve as a dance floor.

There is also "The Spa by Ivanka Trump" – which the U.S. President's oldest daughter helped design. In her role as an executive vice-president of the Trump Organization, Ms. Trump visited the Vancouver site in 2013 and 2014.

The hotel rooms are part of the first 22 floors, while the condos start on the 23rd floor. Three penthouse condo units, which had assessed values of $11.5-million, $13.7-million and $14.6-million last summer while still unfinished, have not been listed for sale yet.

"The Trump brand has always been good, always been great, even prior to him being the President," Mr. Tiah said. "When we signed this deal, he had no political aspirations at that point in time. I think the brand is in good hands. It is going to be a good brand for many, many years going forward."

But critics abound, saying they are worried about potential conflicts of interest between the U.S. President and his worldwide business holdings.

Shari Mountain, a 20-year-old Vancouver event manager, believes the Trump name is toxic. "I'm not a fan. It's not the most ideal situation," she said in an interview Friday as she walked by the building. "There is so much controversy in America about Trump and I would much rather not have that kind of world come to Canada."

Two anti-Trump protests are planned in Vancouver for Tuesday, and she hopes to attend one of the rallies.

Nevertheless, Vancouver is a favourite destination for well-heeled travellers, including those who support Mr. Trump or others who are politically indifferent, said Andy Yan, director of Simon Fraser University's City Program.

"Even though there are some people who will never set foot in Trump tower, there will be many, many others who will," said Mr. Yan, an urban planner. "There are many wealthy residents and hotel visitors, and that flies in the face of the hippie, granola-eating stereotype. It's the duality of identities in Vancouver." 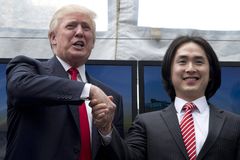