The Trump administration has spelled out in eight pages what it wants from Canada and Mexico in an overhaul of the North American free-trade deal.

But don't be distracted by the jargon about rules-of-origin, trade remedies, procurement and state-owned enterprises contained in the letter to members of Congress.

This is essentially a "what's yours is mine and what's mine is mine" manifesto.

Welcome to the new trade reality for Canada in U.S. President Donald Trump's "Buy American, Hire American" world. Forget Mr. Trump's suggestion that all he wants is to "tweak" NAFTA. The document calls for a total "rethink" of trade in North America in a way that tilts the playing field for the U.S. And by default, away from Canada and Mexico.

Related: What the U.S. NAFTA demands mean for Canada

The ultimate objective, as Mr. Vaughn explains, is to "promote job creation in the United States, strengthen our manufacturing base, and help expand goods exports to each [of] our trading partners."

The document is, of course, the United States' opening shot in a negotiation that could take a year or more. And Canada can say no to any and all of these demands.

But the Trudeau government can forget its best-case scenario – that all Mr. Trump wants is to modernize the 24-year-old agreement.

There is plenty in the Trump wish-list that suggests he's seeking a fundamental overhaul of the rules governing Canada's dominant trade relationship, and the aim is not to make the deal work better for Canadian companies and workers.

Two interrelated U.S. proposals present the biggest threat to Canada. The U.S. wants to get rid of what was the centerpiece for Canada of the original Canada-U.S. trade agreement – namely, the ability of countries to appeal unfair trade actions to an independent panel. Canada has used the Chapter 19 dispute settlement regime dozens of times since 1994, including in the early 2000s to remove punishing U.S. duties on softwood lumber – a chronic dispute that has once again reared its head.

The elimination of Chapter 19 would be bad enough on its own. But the Trump administration would couple that with a special "safeguard' weapon, giving it the power to unilaterally slap tariffs on imports from Canada and Mexico when a U.S. industry is under threat.

These two measures would leave Canada dangerously exposed to arbitrary tariffs any time a U.S. industry is feeling competitive pressures from Canadian rivals.

The Chapter 19 appeal route is used less often that it was in the early days of NAFTA. But experts say it makes countries think twice before launching anti-dumping and subsidy cases against their NAFTA partners, filtering out dubious disputes.

Canada would not have signed the original free-trade agreement without the insurance policy of knowing it had a right of appeal. It's insertion in the deal is an acknowledgment that the trade deck is heavily stacked in favour of the U.S., not the other way around.

It's not the only U.S. proposal that could adversely affect Canada. The Trump administration says it wants to establish new "rules of origin" to boost the U.S. content of products that qualify for duty-free access to its market – a measure that could cost Canadian automotive jobs.

It also wants to attack non-tariff barriers in agriculture – a clear warning that the Trump administration intends to target Canada's highly regulated and protected dairy and poultry sectors.

The letter also proposes new rules on government purchasing – changes that would presumably expand the use of Buy American restrictions favouring U.S. suppliers. In keeping with Mr. Trump's "tails I win, heads you lose" strategy, his administration also says it wants a bigger share for U.S. companies of the government market in Canada and Mexico.

The letter talks about seeking a "level playing field on tax treatment." That's an apparent reference to a proposed U.S. border adjustment tax, which would penalize Canadian exports and disrupt product supply chains.

Prime Minister Justin Trudeau's strategy on NAFTA has been to avoid antagonizing Mr. Trump, while deploying a vast network of surrogates to sell his administration on the benefits of economic integration.

That view isn't evident in Mr. Trump's NAFTA wish list. Maybe it's time to remind him that what's ours is just that – ours. 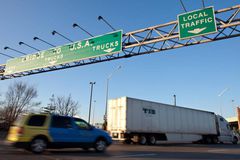