A strike that would have halted a large chunk of Canada's auto production has been averted after the Canadian Auto Workers union extended contracts with Chrysler Group LLC and General Motors Co. and reached a tentative deal with Ford Motor Co.

The agreement on Monday at Ford and extensions for the other two companies will keep the plants running for now and prevent the shock that a strike at all three companies would have delivered to the sluggish Canadian economic recovery.

The union will keep talking with Chrysler and GM officials while progress is being made, but can issue a 24-hour notice if it thinks negotiations are not productive, CAW president Ken Lewenza said late Monday.

Ford has secured labour peace for four years in a deal the company said improves the competitive position of its Canadian plants in the global battle to win auto investment and jobs.

The Ford agreement, now being studied by Chrysler and GM, reflects the power of private and public-sector employers to keep a lid on wages in a fragile economic recovery that has many workers – especially in Canada's manufacturing sector – fearful their jobs will be eliminated.

Auto makers in particular are in a position of strength in Canada because the rise in the value of the Canadian dollar has pushed labour costs above those in their U.S. plants, leading some to threaten to shut their plants here eventually if the union did not agree to their demands.

Detroit Three workers, however, wanted to win back some of the things they gave up during the recession of 2008-2009, which drove two of the companies into bankruptcy protection.

They failed to get back holidays they surrendered in 2009 and the cost of living adjustments that were frozen when they agreed to help the companies.

Mr. Lewenza said it's not clear to him if specific elements of the Ford deal will be difficult for Chrysler and GM to swallow.

"I didn't get an aggressive negative response," he said, but added, "on most counts, they think it's a pretty expensive deal."

"It's a damn good deal in these economic times; it is a damn good deal," Mr. Lewenza told reporters at a downtown Toronto hotel after the union fought off Ford's most stringent demands, but agreed to a pay freeze for existing workers for the length of the contract plus lower wages and a less costly pension plan for newly hired employees.

Workers at Chrysler and GM were scheduled to strike at 11:59 p.m. on Monday if those companies refused to match the Ford deal.

Mr. Lewenza said workers and union leaders recognized that they needed to make sure Canadian operations remain competitive and attractive for new investment.

"We believe that the tentative agreement offers unique-to-Canada solutions that will improve the competitiveness of the Canadian operations," Stacey Allerton, vice-president of human resources for Ford Motor Co. of Canada Ltd., said in a statement.

The union won signing bonuses of $3,000 for about 4,500 Ford workers, plus annual bonuses of $2,000 in each of the last three years of the four-year contract.

The deal – reached eight hours before a strike deadline – will also create about 600 new jobs, mainly at Ford's assembly plant in Oakville, Ont.

That will help provide work for some of the 800 workers laid off after the company closed its St. Thomas Assembly Plant near London, Ont., last year.

About 230 jobs will be created by the addition of a partial third shift in Oakville to increase production of four vehicles built at the auto maker's last remaining assembly plant in Canada.

Another 300 jobs will be created in 2014 when production is scheduled to begin on replacement vehicles for the current crossovers.

Ford is still negotiating with the federal and Ontario governments for financial assistance for an investment of more than $1-billion to redevelop that plant.

The union also managed to maintain two key principles that were under threat – its opposition to profit sharing as a means of compensation, and its insistence that pay for newly hired workers eventually rises to that of longer-term employees.

Newly hired workers will be paid about $20 an hour to start compared with the current $24, and their wages will rise to the full level of $34 an hour over 10 years instead of the current six years.

That's crucial to the company, because the more employees it hires at the lower tier to replace longer-term workers, the more money it will save.

"Ford Motor Co. has indicated to us that the new rate positions them to make the tough decisions in the future for future investment," Mr. Lewenza said. "It's a living wage, not a good wage."

That system compares with the contract the Detroit Three auto makers negotiated last year with the United Auto Workers, which established a permanent second tier of lower-paid workers.

He said Ford recognized the CAW's philosophical opposition to a permanent two-tier system.

Chrysler and GM were still insisting on a permanent second tier in Canada as of early Monday evening. 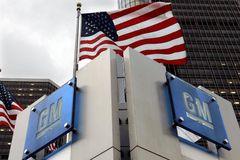 Opinion
World has changed for Detroit’s Big 3 and their unions
September 17, 2012 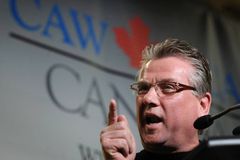 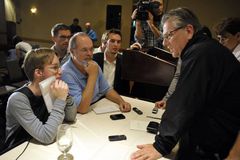 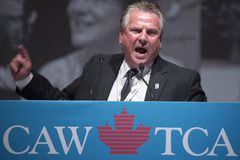