Blame Canada. That's what U.S. farmers say about some of the bubbling gluts weighing on the milk market, and they are eager for President Donald Trump to do something about it.

While growers and exporters of U.S. crops and food products have expressed anxiety over Mr. Trump's restrictive immigration policies and determination to renegotiate trade deals, dairies see him as an opportunity to crack what they see as Canada's protectionist milk practices and to help ease oversupply in some regions.

A key battleground is the little-known market for ultrafiltered milk, a concentrated ingredient used to boost protein content in cheese and yogurt. Canada is creating incentives for processors to buy from domestic manufacturers. U.S. producers say that could be a disaster, and they allege the new policy would violate trade agreements. Companies in Wisconsin and New York alone might lose $150-million (U.S.) in sales north of the border.

Canada "seems to want to have the free flow of goods south, but are protective of anything going north, so it's time to sit down and talk," said Kevin Ellis, chief executive officer of Cayuga Milk Ingredients in Auburn, N.Y. The company exports $30-million a year of ultrafiltered milk to Canada. "My hope is that the Trump administration takes them on."

The view is different from the Dairy Farmers of Canada. The Ottawa-based industry group, which represents 12,000 farms, says imports of U.S. ultrafiltered milk causes an estimated $231-million (Canadian) in annual losses for domestic producers. Under the 1994 North American free-trade Agreement, which Mr. Trump has lambasted as "the worst trade deal ever," most U.S. dairy products face duties of as much as 300 per cent. Ultrafiltered milk wasn't part of those rules and arrives in Canada without tariffs.

Any restriction on exports is bad news for American dairy producers, who saw cash receipts drop to a six-year low of $34.2-billion (U.S.), U.S. Department of Agriculture data show. Low prices and global surpluses have hurt the entire U.S. farm economy, with net income forecast to drop for a fourth straight year in 2017.

The news isn't all bad for U.S. producers. Even with expanding record output, domestic prices are expected to rebound in 2017, according to the USDA. Americans are eating more cheese and butter, and U.S. output may be needed to fill supply shortfalls elsewhere in the world.

The new Canadian policy on ultrafiltered milk – dubbed the national ingredient strategy – hasn't been finalized yet, but U.S. dairy groups already don't like what they've seen.

Canada is already "prohibitive" for American farmers, and its "increasingly protectionist" stance isn't in keeping with trade obligations under World Trade Organization agreements and NAFTA, the Washington-based National Milk Producers Federation said in a statement last year. The group urged Mr. Trump to push back against the changes.

The President has pledged to renegotiate NAFTA as part of an "America first" policy. House Speaker Paul Ryan emphasized the importance of "breaking down trade barriers and improving market access for America's dairy farmers" during a Feb. 13 meeting with Prime Minister Justin Trudeau in Washington.

Canadian Agriculture Minister Lawrence MacAulay, at a Winnipeg industry conference last week, called the country's supply-management system for dairy a "model for the world" that the government strongly supports. The new ingredient strategy was put together by dairy farmers and manufacturers, he said.

"It's the Canadians who have vehemently resisted trade with us and fought to slam shut what few doors are open," said Shawna Morris, vice president of trade policy at the National Milk Producers Federation. Still, until a final version of Canada's new policy is released, no disputes can be officially filed, she said.

Canada controls dairy production through quotas, and imports are restricted with tariffs under a system known as supply management. Regulators have been tight-lipped about the potential changes and when they will officially come into effect. The strategy is still being negotiated, "so we won't discuss it," Isabelle Bouchard, a Dairy Farmers of Canada spokeswoman, said in an e-mail. The Canadian Dairy Commission didn't respond to requests for comment from Bloomberg News.

Meanwhile, American companies say they have already lost Canadian customers. Grassland Dairy Products Inc., based in Greenwood, Wis., annually exports $100-million of ultrafiltered milk to Canada. The company probably will lose all those sales in the next few months, said Goedhart Westers, vice-president of business development. It could take two or three years to find sales with similar returns to replace the lost exports, he said.

"Us losing this business, it means we might have to scale down," Mr. Westers said. "It'll affect employees, and the thousands of farms we buy milk from in the Midwest."

The new policy would also place a cap on the amount of skim-milk powder that the Canadian Dairy Commission will buy back from dairy processors. That could lead to an estimated 120,000 tonnes of extra supply being sold into a two-million-tonne global market, causing a significant disruption in prices, said James McVitty, vice-president of government relations and trade strategy for New Zealand-based Fonterra Co-operative Group Ltd., the world's biggest dairy exporter.

"We share the concern of the U.S. industry," Mr. McVitty said by phone from Washington.

U.S. dairies are already grappling with gluts. The amount of milk wasted or used for animal feed in the northeastern United States last May and June exceeded 75 million pounds, the most in government data going back to 2000. Production peaks in the spring, and this year there could be even more waste because cow herds have expanded and processing capacity hasn't kept pace.

Without Canada's demand for ultrafiltered milk to soak some of the extra supply, dairy farmers will probably see lower paychecks, said Matt Gould, an analyst with Dairy & Food Market Analyst Inc. Producers normally get paid a government-regulated milk price with bonuses for quality or volume. If there's too much milk, premiums will disappear, and they could instead see discounts.

"For some organizations, this is a catastrophic issue," Mr. Gould said. "That milk has to stay in the region and will cause even more enormous dumping and wastage, which will take the spot value of raw milk and drive it right into the ground."

Opinion
Canada’s dairy producers are waking up to the realities of global trade
October 6, 2016 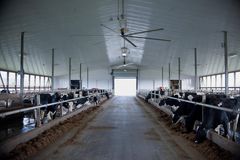 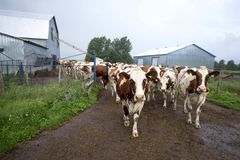 Opinion
Four areas where Canada can counter the Trump effect
February 19, 2017
Report an error
Due to technical reasons, we have temporarily removed commenting from our articles. We hope to have this fixed soon. Thank you for your patience. If you are looking to give feedback on our new site, please send it along to feedback@globeandmail.com. If you want to write a letter to the editor, please forward to letters@globeandmail.com.
Comments