A U.S. district court judge has decided to accelerate the legal battle over dividing the remaining assets of Nortel Networks Corp., ruling on Tuesday that he will not release a decision on an appeal by U.S. bondholders but will send the case directly to a superior court.

Judge Leonard Stark of the U.S. district court in Wilmington, Del., told all parties to the long-running Nortel bankruptcy he is worried that years of delays have harmed former employees and pensioners, who are still waiting to find out how much of Nortel's $7.3-billion (U.S.) in remaining assets they will receive.

"The ongoing global litigation … has caused a massive, ongoing dissipation of the escrow funds – all while tens of thousands of creditors have suffered, lacking access to any portion of the funds," he wrote.

Judge Stark presided over an appeal hearing in April in which U.S. bondholders asked him to overturn a 2015 ruling that laid out a formula for distributing Nortel's remaining cash among its divisions in Canada, the United States and Europe.

But Judge Stark said on Tuesday that, instead of working on a decision that would take months, he will use his authority to send the matter immediately to the Court of Appeals for the Third Circuit, essentially asking the superior court if it will hear the appeal immediately.

Judge Stark said he is convinced any decision he renders will be appealed to the Third Circuit anyway by one of the parties, so his move will save months of delay. "It is essentially certain that one or more parties would be dissatisfied with whatever decision this court would render and would, therefore, press a further appeal," he said.

Judge Stark said it would take him three or four months "at best" to write a decision, and parties would then have the right to ask his court for a reconsideration of a portion of the decision, which could keep the case in the Delaware district court "until some time in 2017."

If the Third Circuit appeal court agrees to hear the case, he estimated it could be expedited and "maybe also argued and possibly even decided" by early next year.

He added that if the court upholds the original decision on the distribution, it could be possible for some interim distributions to be released from the escrow accounts to help pensioners, employees, trade creditors "and others who have waited so long without obtaining any recovery."

Nortel's business divisions filed for bankruptcy protection in Canada and the U.S. in 2009, and creditors have been fighting since over which jurisdiction deserves the lion's share of the remaining assets, which will ultimately determine whether creditors in different regions receive more or less on their claims.

Bankruptcy judges in Canada and Delaware held an unprecedented cross-border trial in 2014 and issued parallel rulings in 2015, both proposing that the assets be distributed evenly on a pro rata basis among the three geographic regions. U.S. bondholders sought leave to appeal the Canadian decision, arguing for a greater share of the distribution, but were turned down earlier this month by the Ontario Court of Appeal. They had the automatic right to appeal in the United States, however, so the case has been continuing in U.S. court.

The Ontario Court of Appeal's decision, released on May 3, said more than 6,800 Nortel workers and pensioners have died since the company filed for bankruptcy protection. A recent analysis of the professional fees charged to Nortel's estate by lawyers and others working for creditors shows the total costs, which paid out of the company's remaining assets, have surpassed $1.8-billion or $2.5-billion (Canadian).

Judge Stark, who heard the appeal of the Delaware decision, said the Ontario appeal court's decision not to hear the case has added urgency to the need for the U.S. court to rule, saying the "Canadian appellate proceedings have advanced far head of the U.S. proceedings," which "pushes the balance" in favour of sending the case directly to the Third Circuit. If the Third Circuit does not agree to hear a direct appeal, Judge Stark said he will stay on the case and make a decision "in a timely fashion." 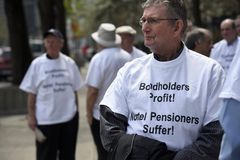 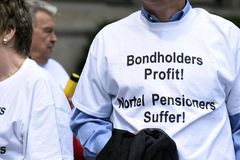