Valeant Pharmaceuticals International Inc.'s newly installed chief executive officer Joe Papa got a rough reception from investors Tuesday as he slashed previously lowered financial projections for this year and revealed fresh problems at the formerly high-flying company whose past aggressive corporate practices landed it in trouble with investors, debtors, lawmakers and government authorities in 2015.

Valeant stock fell by as much as 22 per cent Tuesday after the Laval, Que.-based company said it expects revenue of between $9.9-billion (U.S.) and $10.1-billion this year, down from its last forecast of at least $11-billion. Valeant also said it would earn "adjusted earnings per share" – a bespoke, non-GAAP measure – of no more than $7 a share this year, down from its previously reduced forecast of between $8.50 and $9.50. (GAAP stands for generally accepted accounting principles.) Valeant's first-quarter results also disappointed as its $2.37-billion in revenue and adjusted EPS of $1.27 fell short of expectations. The company posted a first-quarter loss of $1.08 a share.

"The stock market doesn't like to see" such a sharp cut in guidance, said Timothy Chiang, a senior analyst with BTIG in New York. "They're facing declines their key growth areas."

The stock closed at $31.47 (Canadian) on the Toronto Stock Exchange, down 15 per cent on the day, and more than 90 per cent off its peak last summer, when it briefly became Canada's most valuable public company. Valeant has now fallen off the list of 50 most valued TSX-listed companies, according to S&P Global Market Intelligence, with a market capitalization of just under $10.8-billion.

Mr. Papa, barely 30 days on the job, tried to assure investors on a conference call that he could stabilize the company within six months.

"I'm confident in Valeant's future," he said, adding that he expects Valeant to remain onside with its commitments to lenders this year and to pay down $1.7-billion of its $30-billion-plus debt load accumulated during an acquisition spree by deposed predecessor Michael Pearson. "We have a solid position with our liquidity," he said.

The company is still reeling from a hellish nine months. At one point on the call, Mr. Papa referred to Valeant as a "distracted organization."

He blamed excessive turnover among sales staff for an anticipated $390-million revenue shortfall this year from its star drug, irritable-bowel treatment Xifaxan. The product, which generated $208-million in first-quarter revenue, is underperforming against expectations, he said.

But the two parties are struggling with the new program. "A significant portion of our Walgreens prescriptions have profitability significantly below our internal projections and meaningfully below non-Walgreens prescriptions," Mr. Papa said. "Every time a prescription goes out the door, we're taping dollar bills to that prescription." Revenue from the company's U.S. dermatology business sagged to $229-million in the quarter from $399-million a year earlier.

That sparked a slew of questions from analysts. Mr. Papa struggled to clearly explain the problem, suggesting it was because consumers with health care coverage were receiving products before they were approved by plan providers. "We do think it's fixable" and in the interests of both Valeant and Walgreens to do so, he maintained.

The fast-talking Mr. Papa, former CEO of U.S. drug maker Perrigo Co., was an upbeat, peppy presence on his first Valeant earnings call compared with the gruff Mr. Pearson, a Canadian-born former McKinsey consultant and mastermind of the company's strategy. Under Mr. Pearson's watch, Valeant had become the enfant terrible of Big Pharma, unapologetically and single-mindedly acquiring pharmaceutical companies, slashing research and development spending and aggressively raising prices of newly acquired drugs. Its accounting made the company difficult to follow, despite its repeated efforts to provide more disclosure.

Mr. Pearson's compensation was heavily weighted toward delivering stockholder returns of 15 per cent annually or more, and he took pride in rapid deal making, often with little due diligence. Valeant's ferocious appetite and soaring stock price made it a favourite of hedge funds, including Bill Ackman's Pershing Square Capital Management, one of Valeant's biggest shareholders and boosters. But it also prompted sharp criticism for its practices and morals, notably from the leaders of U.S. holding company giant Berkshire Hathaway. The company also courted criticism for hostile takeover bids, drug price spikes that raised the ire of U.S. political leaders, and its arrangement with Philidor.

Revelations about Philidor's questionable practices and attacks by short sellers last fall caused Valeant's stock to plummet and sparked an internal investigation and external probes by government authorities in the United States, including the U.S. Securities and Exchange Commission.

Engulfed by restatements, regulatory probes, price rollbacks and an attempted overhaul of its business, the company delayed the release of its first-quarter earnings and barely filed its annual report on time, prompting some lenders to declare the company in default of its obligations.

Finally, directors and investors who had backed Mr. Pearson and former chief financial officer Howard Schiller turned on them after Mr. Pearson returned from a bout of severe pneumonia. In March, they accused Mr. Schiller of "improper conduct" while he was CFO and ousted Mr. Pearson. Most of the company's directors last year are being replaced at the upcoming annual meeting.

Also Tuesday, Ruane Cunniff & Goldfarb Inc., previously Valeant's largest shareholder, revealed in a filing with the U.S. Securities and Exchange Commission that it had cut its stake in the company by nearly half, to 16.1 million shares from 30.3 million at the end of March. Ruane came under heavy fire for its Sequoia Fund's outsized bet on Valeant, which led to the retirement of CEO and Sequoia co-manager Robert Goldfarb earlier this year. Opinion
We must not sell short the value of short-sellers
May 16, 2018 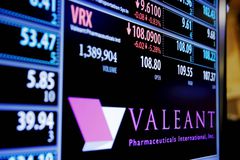