The drug maker has changed how it calculates executive cash bonuses. Their incentives are no longer tied to adjusted earnings per share, which were used as an executive incentive when the company was a market darling. The bonuses will now be pegged to Ebitda – earnings before interest, taxes, depreciation and amortization – which, as it happens, is also a metric watched by its creditors.

"Investors are laser focused on Valeant's debt covenants – and covenants are tied to Ebitda," said Umer Raffat, an analyst with Evercore ISI. "Executives are being paid on being able to service debts. It's just about the debt servicing."

The embattled drugmaker said during its earnings presentation Tuesday that it will no longer publish adjusted net income and earnings per share, profit measures it tied to hefty executive payouts as its shares soared through August 2015.

As it turns out, the company had received a firm push: In October, the U.S. Securities and Exchange Commission sent a letter to Paul Herendeen, Valeant's chief financial officer since August, complaining about the drug maker's presentation of adjusted earnings per share. The figures, the SEC warned, were inconsistent with the agency's accounting guidance "and should be discontinued." Valeant wrote back the same month that it would stop publishing the figures at the end of the year, according to correspondence made public by the SEC in November.

Valeant believes Ebitda and revenues "are the most appropriate performance and evaluation metrics for our company," Herendeen told investors during the morning call Tuesday. The company didn't offer specifics about the Ebitda targets its executives would need to hit, and it declined to comment for this story on Wednesday.

Valeant, which has headquarters in Laval, Quebec, isn't itself a member of the U.S. index. The shares are now trading at a fraction of their 2015 peak after the drug maker got embroiled in scandals about prices hikes and accounting that led to legal and regulatory investigations.

The October warning wasn't the first time the SEC had slammed the company over its use of financial figures that do not comply with Generally Accepted Accounting Principles, or GAAP. In June, about a month after new CEO Joe Papa took over, Valeant began giving greater prominence to GAAP numbers in earnings releases in response to SEC warnings.

The SEC's concerns at the time included the company's presentation of substantial non-GAAP earnings per share, without noting large losses per share when measured under GAAP. The move was part of a broader shift among companies as the SEC has pushed them to downplay adjusted measures that may make their results look stronger than those calculated using GAAP.

Yet in choosing to turn to an adjusted form of Ebitda, Valeant is still putting the focus on a non-GAAP measure. But Ebitda is also a measure that creditors holding $30-billion in Valeant debt agreed to make the primary measure of whether the company is in compliance with its financial convenants.

That's proven a struggle for Valeant recently. Last year, it twice asked its creditors to ease its covenants. Ebitda fell 24 per cent in the fourth quarter from a year earlier and was down 20 per cent for all of 2016, the company reported Tuesday.

With a third of Valeant's total debt, or about $10-billion, floating rate, a one percentage point rise in its variable rates would add $100-million in interest expenses, Herendeen said.

The CFO added that he expects Valeant to remain compliant with its covenants in 2017, but analysts say it's a close call. 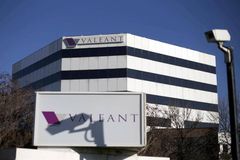