The food fight is going digital.

Discount behemoth Wal-Mart Canada Corp. has quietly started to sell food online, ranging from Halloween candy to gluten-free organic cereals and prepared Thai dishes. Its initiative sets the stage for an even more intense battle with grocery rivals in an already cutthroat field.

The world's largest merchant can quickly squeeze competitors when it focuses on any category and Wal-Mart's new push into online food has the potential to cut further into grocers' already narrow profit margins.

"It's going to make it tougher for everybody," said Thom Blischok, chief retail strategist at consultancy Booz & Co. in San Francisco. "This is the beginning of a very unique transformation."

Retailers are shifting their selling online in categories ranging from books to electronics and toys.

But food has remained a tough cybernut for merchants to crack, because its distribution entails shipping sometimes bulky products to customers while ensuring the food stays fresh and arrives on time.

In the dot-com era more than a decade ago, several online grocery retailers faltered because they couldn't find the right business model.

A few North American players have survived, including Grocery Gateway, which was struggling when it was purchased in 2004 by Ontario-based Longo Brothers Fruit Markets Inc. It has remained regional while streamlining its distribution systems.

Now with U.S. giants such as e-commerce specialist Amazon.com Inc. and Wal-Mart putting a priority on food, the fight is heating up to satisfy customers' palates and grocers' bottom lines in the digital age.

Wal-Mart, which already sells food online in the United States and beyond, is starting in Canada with non-perishable fare, but will look into expanding into fresh and frozen offerings, spokeswoman Susan Schutta said. "We are talking to our customers to understand what they need, beyond" non-refrigerated packaged goods, she said in an e-mail.

Wal-Mart generally offers free delivery on all its products, although not in the Canadian territories. And it's testing same-day shipping in Toronto with Canada Post, which does its regular deliveries.

A shift online is inevitable as more consumers use their smartphone to access information and make purchases, said Stewart Samuel, program director at researcher IGD.

Global retailers, such as the British titan Tesco PLC as well as Wal-Mart, have tested mobile shops at subway stops and other convenient locales to allow time-stressed consumers to buy everyday goods, including groceries, on the run.

Wal-Mart is a good candidate to provide online food shopping because of its large sales volume, which can help make up for razor-thin profit margins in online groceries, Mr. Samuel said.

But Wal-Mart's entry into food e-commerce will be felt by rivals. "It's hard to compete against someone like them," said Stephen Tallevi, general manager of Grocery Gateway.

Grocery Gateway, which operates in southern Ontario and charges $9.99 (Canadian) for delivery, has improved its bottom line by shifting all of its distribution to one site in Rexdale, Ont., he said. Previously, its staff picked and packed the groceries from stores after they closed, resulting in extra labour costs and sometimes limited food options, he said.

The centralized system allowed the business to cut staff by as much as 15 per cent, reduce out-of-stock items and meet growing demand, with sales expected to rise more than 10 per cent this year, especially among young urban professionals living in condominiums, he said.

Grocery Gateway, which he said is now in the black, plans to take on bigger rivals such as Wal-Mart by focusing on its core strength of higher-margin fresh foods, he said. As well, it is training its truck drivers, which it calls field service representatives, to provide personalized service, such as carrying customers' groceries into their kitchens. Even so, Wal-Mart generally "drives prices down. We see them as a serious competitor." 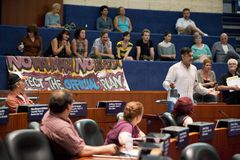