Waterloo's mayor has a message for Canadians in the market for a cellphone: It's time to get down to the store and ask for a BlackBerry in the name of national pride.

On a day when the country's biggest technology company (and the Ontario city's largest employer) announced 5,000 job cuts and the postponement of a key product, Mayor Brenda Halloran said "every single Canadian" should be looking for ways to support Research In Motion Ltd..

"I think we need to be supportive as Canadians," said Ms. Halloran, a second-term mayor who has lived in the region for more than 40 years. "I think every single Canadian should be buying Canadian technology. We need to remember they need our support and rally around them and continue to use their products."

RIM said Thursday it would cut jobs and delay the launch of smartphones running its new BlackBerry 10 operating system until early next year, as it posted a $518-million loss and warned of further losses in coming quarters.

The news has reverberated through the Southern Ontario city, which earlier today had celebrated a report from the Conference Board of Canada, predicting the region would post the strongest economic growth in Canada over the next 12 months.

City councillor Mark Whaley, who helped found an "intelligent community" movement to capitalize on the intellectual capital cultivated in the community, said the city is basically holding its breath to find out what happens next.

"The city's got itself on the pause button," he said. "We're just taking in the news today and trying to make sense of it."

Mayor Halloran said she's "confident in RIM's continued success" and wasn't willing to speculate on the regional effect of any cuts.

"I think the company's doing the things they need to do to stay focused, and reorganize and restructure internally," she said. "RIM has been growing substantially over the past six years. They've come to a point now where they've got to reorganize and look at who they need to still work there. They're still going to have close to 10,000 employees, which is not a small company. They have 78 million subscribers."

Still, any ill effects as a result of the company's struggles have yet to be widely felt in the region, said real estate agent Benjamin Bach. He said that, despite persistent worries over the fate of the company, national restaurant chains continue to establish new locations, while others are building empty retail space with the hope of luring new stores into town.

"There's obviously a lot of concern about what would happen if RIM had something unfortunate happen," said Mr. Bach, a sales agent at Keller Williams Golden Triangle Realty. "But to this point, we haven't seen anything at RIM have an effect on the market, which has been very strong."

Communitech is a not-for-profit organization in Waterloo that helps to support and accelerate the growth of technology companies in the region. It provides mentorship opportunities, holds community events and boasts a "30,000-strong pool of technology professionals."

The documents encourages Communitech's partners to "demonstrate continued confidence in the potential of RIM," and the resilience of Waterloo Region. For example, while "people generally think of RIM as being at the epicentre of tech," it reads, the company "is just one part of a strong and diverse regional economy" — and far from Canada's next Nortel. 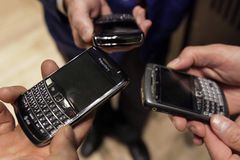