Journalists are professional skeptics. If somebody tells us something, we're supposed to question it, probe for inconsistencies, arrive at something resembling the truth. So why do we throw on rose-coloured glasses when we hear something promising about our own industry?

Almost three years ago, the Canadian-born globe-trotting journalist Wilf Dinnick pulled up stakes in Dubai to move back to Toronto and try a bold new approach to journalism. OpenFile.ca would dedicate itself to community-based journalism: Any reader could suggest a story for the site to cover, other readers could weigh in with links, video, images, comments, or other content about the issue, and then someone paid by OpenFile – a staffer or freelancer – would pick up the thread and turn out a polished story.

"Together we get a better understanding of the stories shaping our community," explained a promotional video posted to Vimeo. Story ideas "could be a simple question, a complaint not being heard, or something that the other news outlets consider just too small or unimportant."

It sounded terribly promising, especially in a media environment that was shrinking like a naked man outdoors in February. And in Canada, home of far too few innovations in the business of news delivery, the industry rushed to embrace the possibilities. This newspaper, the National Post, and the Harvard-based Nieman Journalism Lab all carried credulous coverage.

Supported by someone in the shadows who was described as one of Canada's best investors, OpenFile expanded from its base in Toronto to five other cities: Montreal, Halifax, Calgary, Vancouver and Ottawa. (It also built websites for Hamilton and Waterloo, but stumbled and shut those.)

Still, website traffic was underwhelming. OpenFile pivoted from its original mission and deployed tactics such as aggregating hot stories from elsewhere to attract more readers, in hopes that would prove the site was a legitimate place for advertisers to reach an audience. By last year, Mr. Dinnick, OpenFile's CEO, said the site was pulling about 400,000 unique visitors a month.

Last January, J-Source, a project of the Canadian Journalism Foundation, named Mr. Dinnick its Canadian Newsperson of the Year. "Many said his idea was doomed to founder on the rocks of financing," read his nomination. "Instead, it has spread to several cities, and while young, it promises a new way to think about news."

And then last September, without warning, OpenFile shut its operations, evidently foundering on the rocks of financing. Mr. Dinnick promised it would be back soon, freelancers who were owed money began a public campaign to get their cheques, and 400,000 readers simply went elsewhere. In time, Mr. Dinnick explained that the accounting books were being audited, the company's accounts had been frozen, and that he would pay people as soon as he could.

Last week, the site went offline entirely, which Mr. Dinnick told me on Wednesday was due to his desire to save on server costs.

If and when he emerges from the financial fiasco, he said he doesn't have any clear sense of what the new OpenFile will be. But it is pretty clear the original dream is dead. Yes, crowd-sourced stories do exist, but primarily in a very low-fi (read: inexpensive) form at sites such as Reddit. It's simply impossible to make enough money – especially with the economics of Web advertising being what they are these days – to support the sort of professional operation envisioned by OpenFile. Mr. Dinnick had hoped so-called sponsored content – stories supported by specific advertisers that trumpet the great things being done by those advertisers – would pay the bills. But not enough of that materialized.

Canadians often complain that we don't support our own innovators or heroes, that we cut them down when they dare to rise above the rest of us mediocre folk. That might sometimes be true – though Australians do it, too (there, it's called the tall poppy syndrome); in Britain, the tabloid culture cuts down celebrities; in the United States, too. But it's also true that those of us who are supposed to ask tough questions of the industries we cover – especially, these days, the news and technology businesses – too often fail to do so. (Just ask those retail investors who bought Facebook's hype and stock.)

Sometimes, that's because the companies are private, and their operations are opaque. But sometimes we're too eager to believe a good story, especially if it offers some hope for the survival of our own industry.

Which I guess is why I'll leave the last word to someone who worked closely with Mr. Dinnick. "I'll say this for Wilf," said Craig Silverman, a founding editor of OpenFile who left the company in late 2011. "He raised money from a very prominent investor at a time when money was not being put into media. So I will not write him off."

Ailing magazines could use a little help – from broadcast
May 11, 2018 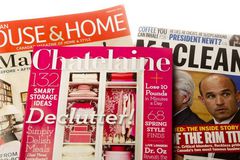 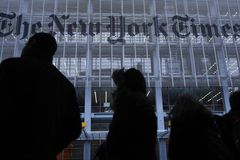 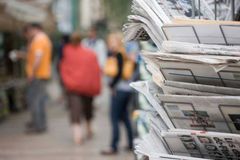