Trying to buy a house in big cities such as Toronto or Vancouver is challenging for any young family, but is doubly so for newcomers to Canada.

Prices in the housing market often come as a shock and then the process of qualifying for a Canadian mortgage can be complicated and confusing. However, once qualified, new immigrants are able to borrow at competitive market rates.

Prashant Kumar came to Toronto with his family in 2013 to work as a business analyst. Originally from Uttar Pradesh in northern India, they chose to settle in Canada because of the opportunities to learn and grow and because they love it here – even our weather.

As a landed immigrant, Mr. Kumar recently decided to look at buying a house but found both the prices and blind bidding wars "simply crazy."

With a 12-year-old and a five-year-old, he and his wife were focused on finding a house near good schools, but after realizing they couldn't afford the locations they liked, will be buying their first home outside of the city.

Dave Larock (below), a mortgage broker and president of Integrated Mortgage Planners Inc. in Toronto, helped with mortgage advice and found them a good rate.

"The reason I went to a mortgage broker is because it takes away the hassle of talking to every bank and going back and forth," says Mr. Kumar. "I didn't face that much of a challenge qualifying for a mortgage because I'm able to pay some of the price from my own pocket. We're very excited about the prospect of moving out of our small apartment into a house where the children can have a backyard and we can have a barbecue."

For any Canadian buyer, qualifying for a mortgage is much easier if you have a large down payment. Newcomers who can put down about 35 per cent of the purchase price of the property and produce a bank statement showing 12 months' worth of mortgage payments in their Canadian bank account will generally be approved by a lender. But that money has to be in Canada.

"There are lots of people coming to Canada with substantial assets who can become qualified buyers in short order," says Mr. Larock. "However, lenders in Canada won't count money that you've got overseas as part of your net worth calculation. Money has to have been in Canada for a minimum of 30 days before it can be used on a purchase. So if you've got the necessary money but haven't moved it over, lenders won't close your deal. There are strict criteria under our anti-money laundering regulations."

Newcomers arriving with fewer assets and little to put down on a house may find getting a mortgage more challenging.

The first challenge to meet is immigration status. Once you are a permanent resident, like Mr. Kumar, you are considered as if you were a Canadian citizen in the eyes of lenders, Mr. Larock explains. If you only have a temporary work visa, it is possible, but more difficult, to get a mortgage approved because of the possibilities you may not get permanent residency. From a lender's point of view, they do not like the idea that somebody who owes them money might just up and leave, says Mr. Larock.

The second challenge for new Canadians is proof of income. You need to show a lender how you earn money. Some people open a business here, or have a business overseas and bring some of that business to Canada. But it takes time to establish evidence that you can make a living.

"If you're self-employed, you need a two-year history of Canadian self-employment, so you may have a long wait before you have any provable income for a lender," says Mr. Larock.

"If you are salaried, it's less of a challenge, although the lender will want to make sure that you're beyond your probationary period. New Canadians must be employed for at least three months before being eligible for a mortgage. If a person is transferring here as part of a corporate relocation program with an existing company, then probation isn't an issue. You can be approved based on your income on Day 1."

The third challenge is providing a credit history – often the biggest stumbling block for newcomers in getting a mortgage, according to Mr. Larock.

Typically, a lender wants to see a 12-month Canadian credit history of two trades. That might include showing a good track record with a major credit card or car loan payments or even providing a landlord's letter stating you have paid on time for the past year. But if you can produce a good credit report from an international credit reporting bureau, such as Equifax or TransUnion, lenders may accept that in lieu of, or as a supplement to, your Canadian credit history.

"The lender needs to know that you pay your debts on time," says Mr. Larock. "You're lucky if you're coming from the United Kingdom or the United States because they have Equifax credit reports the same as we do.

"It's more difficult if you are from another country, such as China, where a lot of the statements aren't in English so the lender can't read them. Basically, if you can get a formalized report that the lender recognizes and it's readable and credible, then that can mitigate."

Lenders are willing to be more lenient with newcomers if their mortgage is insured against default, because then there is much less risk.

For example, Genworth Canada offers mortgage default insurance on owner-occupied properties worth less than $1,000,000 to newcomers who meet their criteria.

Qualified home buyers who have immigrated or relocated to Canada within the past five years are eligible under Genworth's New to Canada program to purchase a property with as little as a 5-per-cent down payment. The Canadian government also offers qualified newcomers similar help in making home ownership possible though the Canada Mortgage and Housing Corporation. CMHC-insured financing is available coast to coast to borrowers with permanent and non-permanent residence status.

Mr. Larock sees his job as explaining to potential buyers what the criteria are for qualifying for a mortgage, presenting them with a series of options and then guiding them through the process.

"I talk to newcomers about what's available now and how in six to 12 months, things might change considerably and if you were to wait, then these are the options that would open up to you," says Mr. Larock. "One thing that helps is I work a lot with numbers. Even if there's a language barrier, they can look at the numbers and understand quite clearly. Numbers are universal."

The joys and pitfalls of preconstruction ownership
June 7, 2017
Why you shouldn’t take the maximum mortgage you are offered
June 13, 2017
Knowledge is power in negotiating your mortgage
May 23, 2017
How to pay for a million-dollar reno
June 11, 2018 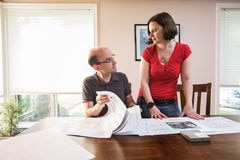 Renting out space in your home: Is the stress worth it?
May 23, 2017
Do you need mortgage insurance?
May 23, 2017
Follow us on Twitter @globebusiness Opens in a new window
Report an error Editorial code of conduct
Due to technical reasons, we have temporarily removed commenting from our articles. We hope to have this fixed soon. Thank you for your patience. If you are looking to give feedback on our new site, please send it along to feedback@globeandmail.com. If you want to write a letter to the editor, please forward to letters@globeandmail.com.
Comments