It sounds like the ultimate reality-TV challenge: Give an erratic, bombastic businessman the keys to the world's most powerful economy and see how long it takes him to crash it.

But economists who have studied the likely impact of Donald Trump say the outcome may be different than you expect.

While the orange-coiffed TV star could plunge the United States into recession if he follows through on his protectionist trade rhetoric, he could also preside over robust growth if he chooses to let his wall-building impulses fade into the background.

The surprisingly benign outlook around Trumponomics reflects the U.S. economy's current momentum. Unlike his predecessor, The Donald is taking over a country that is doing far better than its critics – including Mr. Trump himself – want to admit.

Joblessness, which hit 10 per cent during the financial crisis, has slid by more than half. It now hovers around 4.6 per cent – pretty close to full employment, by most estimates.

The economy, which was shrinking at an annual clip of 5.4 per cent when Barack Obama was inaugurated, is now expanding at a 2.9-per-cent pace, according to the Atlanta Federal Reserve Bank's GDPNow model.

"Under current policy, the expansion has a ways to run," Mark Zandi, chief economist of Moody's Analytics, says. "I don't see anything that should derail it in the foreseeable future."

Rather than a world financial crisis, Mr. Trump's biggest opponent is history. Experience shows that recoveries rarely endure as long as the current rally.

"Given the length of the U.S. recovery, the surprise would be if the U.S. did not face a recession during Trump's first four years in power," Douglas Porter, chief economist with Bank of Montreal, says.

If history is any guide, Mr. Trump will have to be nimble to avoid a downturn on his watch. But what are the most likely prospects for this most unlikely of presidents? Here are three key scenarios.

The U.S. economy faces a handful of big dangers from Mr. Trump's policies, according to Megan Greene, chief economist at Manulife Asset Management.

One is the possibility that his policies incite geopolitical conflict. Another is the prospect that his free-spending agenda will eventually cause the Federal Reserve to raise rates too fast, tipping the economy into recession.

However, the biggest single danger is more immediate. It's the possibility that Mr. Trump will rush to follow through on his protectionist trade agenda and begin his term by slapping massive tariffs on products made in China and Mexico.

The market is largely ignoring the possibility of a trade-induced downturn, but "I think the odds are underestimated," Ms. Greene says. She says Mr. Trump's recent appointments to key jobs suggest he is more wedded to a bare-knuckles trade policy than many people want to believe.

Ms. Greene is not an alarmist. Despite her concerns, she pegs the odds of a recession during the first two years of a Trump administration at roughly 20 per cent.

However, no one should be shocked if Mr. Trump decides to wage a trade war, she says. And if he follows through on other parts of his platform – such as deporting large numbers of illegal immigrants – the economic impact would be even more severe.

A recession later in Mr. Trump's term depends on whether Congress gives him the green light to slash taxes, boost government spending and deregulate.

These measures would initially boost the U.S. economy. But eventually, the stimulus could cause the economy to overheat and trigger the Federal Reserve to raise interest rates at a faster clip to curb inflation.

"If you have deficit finance, tax cuts and spending increases a time when the economy is operating at or beyond full employment, that generates inflation and higher interest rates and that generally leads to recession," said Mr. Zandi.

"Odds are pretty good that at some point in his term, likely toward the end of his term, the economy will struggle and the odds of a recession are pretty high," he said.

The Fed, which recently raised rates for the second time since the Great Recession, has signalled it may pick up the pace if Mr. Trump follows through on all his plans.

"The committee might need to raise the federal funds rate more quickly than currently anticipated to limit the degree of undershooting and stem a potential buildup of inflationary pressure," according to minutes from the central bank's December meeting.

The current recovery may be long in the tooth, but recoveries don't die of old age. They usually end when the economy overheats, inflation soars and the central bank pushes interest rates into painful territory to quell the exuberance.

Paul Ashworth, chief U.S. economist at Capital Economics, sees no signs of that happening over the next couple of years. Inflation remains low, wage growth is modest and "there are no obvious bubbles in asset prices."

The Federal Reserve is likely to hike rates four times this year, he says, but he believes monetary policy will remain loose in real terms because of rapidly rising inflation. At the same time, the Trump administration will be cutting taxes and increasing spending on everything from defence to infrastructure.

The combination of a free-spending administration and easy money should support U.S. growth, Mr. Ashworth says. He predicts the economy will expand 2.7 per cent this year and 2.2 per cent in 2018.

"Over the next 12 months to two years, the risk of a recession is fairly low," he says. "It would be very unusual to have a significant downturn at a time when Washington is throwing money at the economy."

Of course, what happens after that is open to conjecture. But Mr. Ashworth notes that recessions typically occur during half of presidential terms, so a downturn late in Mr. Trump's four-year span doesn't necessarily amount to a judgment on Trumponomics.

"It doesn't matter who was elected," he says. "I would have said there was a 50-per-cent chance of a recession over the next four years based purely on historical statistics."

He suggests Canadian who are worried about the prospects for Mr. Trump might want to focus their attention closer to home, where a slowing real estate market is casting clouds over the domestic economy.

"If you ask me which economy is most likely to fall into recession first, the U.S. or Canada, I would put my money on Canada." 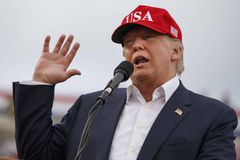 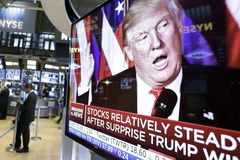 Follow Ian McGugan and Rachelle Younglai on Twitter @IanMcGugan @rachyounglai
Report an error Editorial code of conduct
Due to technical reasons, we have temporarily removed commenting from our articles. We hope to have this fixed soon. Thank you for your patience. If you are looking to give feedback on our new site, please send it along to feedback@globeandmail.com. If you want to write a letter to the editor, please forward to letters@globeandmail.com.
Comments