As the first earnings reports of the year begin to roll in this week, Canadian telecom investors will be looking for signs that the wireless business remained robust through the end of 2016.

The big carriers added more subscribers on contracts than expected in the first three quarters of last year amid efforts to reduce customer turnover through better service and a push on promotions, such as discounts on new smartphones. As the companies encouraged more subscribers to sign on to premium plans with more data – and higher prices – they protected revenues as well.

Telephone companies and their cable rivals in both the East and West are also fighting for Internet and television subscribers and analysts will parse those quarterly numbers carefully, but wireless remains key to growth.

"In 2017, we expect wireless to remain the growth engine for the sector," RBC Dominion Securities Inc.'s Drew McReynolds said in a report Monday, adding that Shaw Communications Inc.'s fledgling wireless division Freedom Mobile (previously known as Wind Mobile) is expected to put pressure on the incumbents later in the year as it improves its network and handset selection.

For the fourth quarter, Mr. McReynolds forecasts BCE Inc. will once again take the most postpaid wireless subscribers of the Big Three national players (he estimates it will add 92,000 in the period).

Rogers Communications Inc. and Telus Corp. could deliver more "choppy" results, he said (forecasting 58,000 and 74,000 new postpaid subscribers, respectively), "albeit with the continued uptick in wireless industry activity that commenced in the second quarter of 2016 providing a reasonable tailwind for the industry."

The carriers' promotions around Black Friday in late November were "aggressive," Mr. McReynolds said, pointing to $0 offers for the iPhone 7, which was only released in September (contingent on signing up for premium data plans) as well as gifts with purchases worth from $50 to $150.

Canaccord Genuity's Aravinda Galappatthige similarly sees the increased use of handset subsidies as "a very potent incentive for customers, which [does] not just drive smartphone penetration, but entices them to higher-tiered (thereby higher ARPU [average revenue per user]) price plans."

Companies are paying more to acquire or retain customers, putting some pressure on profit margins, but the "meaningful incremental economic value" that comes from steering subscribers toward high-end plans is worth it in the end, Mr. Galappatthige said in a recent report.

Rogers, BCE and Telus report later in January and early February, but the latest read on how Freedom Mobile is doing will come Thursday, when Shaw reports its first-quarter fiscal 2017 results and holds its annual general meeting in Calgary.

Shaw acquired Wind Mobile last year and rebranded it as Freedom Mobile in November, turning on its LTE (fourth-generation) network in Toronto and Vancouver around the same time. But it still has to complete the rest of its LTE buildout, which it hopes to finish by the summer, and needs more devices that are compatible with the frequency of airwaves on which it operates the new network.

Once Freedom is in a better position on network and devices, it is likely to start taking more market share from the incumbents, analysts say. But while it is still early to expect big numbers on subscriber additions, Canaccord's Mr. Galappatthige will be looking for positive signs on other metrics at the division in the first quarter.

He expects costs will be higher in the period due to marketing and promotions around the resbranding, but said he still expects to see growth in profit margins and ARPU. He estimates Freedom will add 28,000 subscribers, slightly below consensus analyst expectations of 31,000. 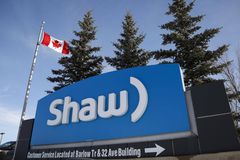