After a long slump, the market for new Canadian wireless customers has taken a surprising turn over the past year – upward.

Industry watchers attribute the surge in wireless subscriptions to a combination of factors, including population growth, demographics, an abundance of new smartphone options and a stronger economy.

For three years, the number of new customers on contracts – known as "postpaid" subscribers – declined. But last year, Canadian wireless providers posted a year-over-year increase, and the first two quarters of this year show the trend continuing at an even faster pace.

Although the market is maturing, there is still room to grow, as the number of cellphones in Canada hovers at around 85 per 100 residents. In the United States and many parts of Europe, wireless penetration rates are at more than 100 per cent, as many people have more than one connected device.

"The penetration rate, which had plateaued, is picking up again," Desjardins Securities telecom analyst Maher Yaghi said in an interview, adding that growth in subscribers – rather than customers paying more on average – is what's largely driving higher revenue at the Big Three carriers, Rogers Communciations Inc., BCE Inc. and Telus Corp.

"We haven't had that in the past. If I look back a few years, it was ARPU [average revenue per user] growth that was the main component of the total revenue growth. Now, it's subscriber growth. The same thing is coming from all three companies."

Mr. Yaghi says younger people are getting wireless service, people are connecting more devices – such as iPads or work phones – and new immigrants and visiting workers are also contributing to the trend. "You have a lot more foreigners buying homes, more people coming in as visitors, employees. That's all contributing to having these additional phones in the system."

Kaan Yigit, president of Solutions Research Group Consultants Inc., says the numbers are also "connected to a glut of devices," noting that smartphones used to be unique in their features but "now you look at them and they're all basically slabs and they do the same thing."

"If you have an iPhone 5 that's three years old, but if it's in good shape, it works fine, you could toss it over to your 11-year-old and get a very basic subscription to it and you're in business."

Mr. Yigit says his firm's research also shows a 20-per-cent increase over the past two years in the number of households without a home telephone, leading him to believe at least some of those cutting the service are either replacing it with wireless for the first time or adding additional mobile accounts.

In recent weeks, Rogers and BCE reported second-quarter subscriber numbers that easily beat expectations. Combined with 20,000 new customers from Shaw Communications Inc.'s Freedom Mobile, the industry has already chalked up almost 202,000 new subscribers in the period, up from 198,000 this time last year. And that's before including results from Quebecor Inc.'s Videotron and Telus, which will report their own numbers on Thursday and Friday, respectively.

BCE chief executive George Cope says his executives speak often "about the demand we're seeing" and points to Canada's immigration rate, as well as customers adding new accounts for multiple devices, as the root causes of the growth.

"It's not just growth of usage [we're seeing] but also the number of new customers," Mr. Cope said in an interview last week after BCE said it attracted 89,000 new postpaid customers in the second quarter. "Clearly the economy has been doing better and, if it's doing better, you are going to see stronger employment and that's going to bring more subscribers into the space."

Desjardins analyst Mr. Yaghi, who says he expects the subscriber trend to continue "until at least the end of 2018," says that the carriers have seen increases in ARPU in recent quarters but have not relied on price hikes for that growth. Rather, some customers are moving to more expensive plans with higher data caps.

Mr. Yigit of Solutions Research says there could be more competition on price and even unlimited data plans once subscriber growth levels off.

"The minute growth stalls, everybody will be going to the boardrooms saying, 'Now what?' That's when you're going to start seeing more competition on the data [pricing] side." 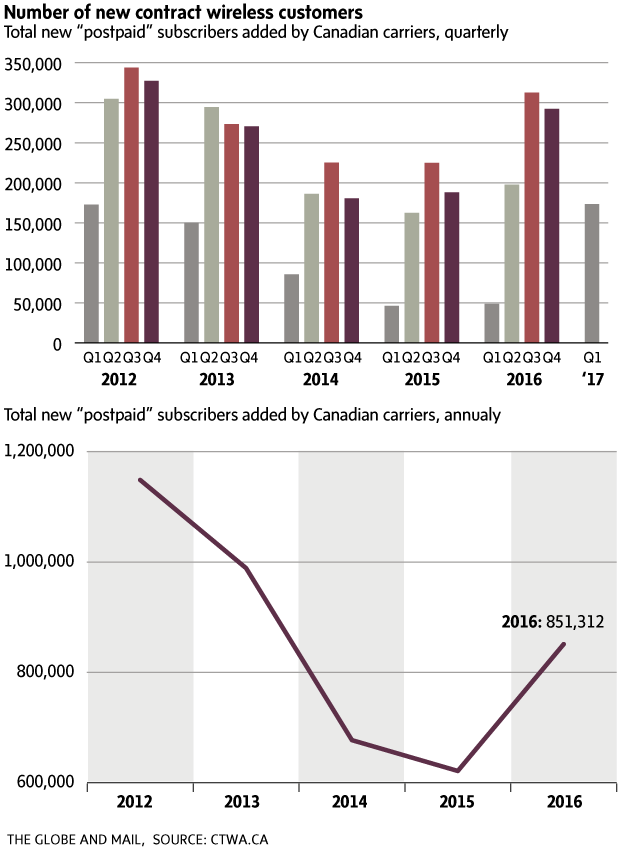 Apple hits record high after surprisingly strong results, forecast
August 2, 2017
Ottawa proposes wireless spectrum rules that could favour Shaw, Quebecor
August 4, 2017
Rogers CEO unveils strategy to improve customer service, build on wireless momentum
July 20, 2017
Follow Christine Dobby on Twitter @christinedobby
Report an error Editorial code of conduct
Due to technical reasons, we have temporarily removed commenting from our articles. We hope to have this fixed soon. Thank you for your patience. If you are looking to give feedback on our new site, please send it along to feedback@globeandmail.com. If you want to write a letter to the editor, please forward to letters@globeandmail.com.
Comments