I just wanted to get that out of the way right off the top, because a lot of you are letting me know about it since I filmed a video with my colleague Simon Houpt in which I suggest that the vast majority of television subscribers are all talk when they say they are going to end their subscriptions once and for all. (Watch the video: Thinking of cutting your cable? Watch this first )

The main point of confusion was my wording when I said 1.3 per cent (it's actually 1.5 per cent, I misspoke) of Canadian viewers cut their cords last year, while 52,000 signed up for new subscriptions. Let me be clearer: Based on market trends, Convergence Consulting said the industry could have expected as many as 220,000 new subscribers in 2012. Instead, it only added 52,000.

The consultants put those numbers through their algorithms to determine the rate of cord cutting. So while the rate of growth slowed considerably, the number of subscribers to paid television services still increased year-over-year in Canada.

The number of cord cutters has been negligible until recently according to Convergence's data, but the consultants certainly expect the trend to accelerate in the coming years as more people warm up to digital alternatives.

They attribute the smaller-than-expected increase in last year's television subscriptions to cord cutters. I could have made that more clear in the video (as I did in the story it was based on: Online TV gains on traditional providers ). Cord cutting is a growing phenomenon, but at this point it's still happening around the edges of television land. In other words, most of us still like to flip channels without worrying about download speeds, data caps and the police.

The fact is, in Canada and elsewhere, cord cutting is in its early days. The Guardian wrote about this trend today, in its story about Game of Thrones setting new piracy records. ""Cord cutters" – those who get their "TV" through devices other than TVs – are in fact still a small percentage of the television audience, even if the proportion seems way bigger in the echo chamber of the Internet. The newest numbers from Nielsen show that while cord-cutting has increased 150 per cent since 2007, the vast majority of Americans (95 per cent) still get their TV watching done the old-fashioned way."

Deloitte published a similar report about Canada earlier this year. As I wrote in January, "the report said that 99 per cent of those who subscribe to paid television service through traditional cable, satellite and IPTV providers will remain customers throughout 2013 because they don't want to miss out on live programming and the reality shows that everyone talks about incessantly after they air."

And that's the message I'm making in the video and here: Live sports, programming preferences, cost and convenience are all major factors in keeping people tied to their television subscriptions. If the data tell us anything, it's that the cable and satellite companies of the world have a little bit of time left to adjust their business models to try to keep subscribers around.

If they get it right, subscribers will keep paying. If not, early cord cutters will be so busy helping their friends install HD antennas that they won't even have time to poke around for the best Game of Thrones file the Internet has to offer. 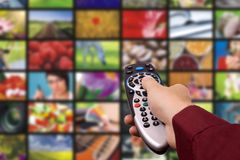 Have you ever considered cutting the TV cord?
April 3, 2013
Follow us on Twitter @globebusiness Opens in a new window
Report an error Editorial code of conduct
Due to technical reasons, we have temporarily removed commenting from our articles. We hope to have this fixed soon. Thank you for your patience. If you are looking to give feedback on our new site, please send it along to feedback@globeandmail.com. If you want to write a letter to the editor, please forward to letters@globeandmail.com.
Comments