After almost two years under suspension, the Russian anti-doping agency wants to show it's capable of cleaning up a tainted sports scene.

The agency, known as RUSADA, boasts of anti-corruption training and a newfound respect for whistleblowers – a group vilified by top Russian officials, including President Vladimir Putin.

Senior staff talk of "the new RUSADA," eager to distance their organization from one that was effectively shut down by the World Anti-Doping Agency in 2015 over allegations that key staff were covering up for doping athletes rather than exposing them.

Even as Russia came under pressure for what WADA called a vast doping system which corrupted the 2014 Winter Olympics, the number of tests carried out in the country plunged. All samples had to be collected by foreign-based organizations and sent abroad for processing, reducing the scrutiny on many Russian athletes.

In June, WADA gave RUSADA the power to test athletes again, and both organizations are under pressure to ensure Russia can catch its own drug cheats.

"RUSADA is a totally new organization," acting CEO Tatyana Chirkina said this week. "RUSADA has very extensively changed its staff, set up a new supervisory board with a chair, and changed its founding documents. A lot of work has been done."

The agency hasn't formally been reinstated by the World Anti-Doping Agency – and won't be unless Russia's government admits at least some level of culpability in past doping coverups.

Still, it's functioning largely on its own, though must provide information constantly to officials from WADA and the British anti-doping agency, which is tasked with helping the reforms.

Crucially, Chirkina said RUSADA has established an investigations unit of "up to 10 people" focused on following up on tipoffs about drug use.

Whistleblowers are often viewed with suspicion by Russian athletes, and Putin has likened them to Soviet citizens who denounced others to the secret police during Joseph Stalin's purges in the 1930s.

Nevertheless, Chirkina said the investigations unit is working on "many" leads and will soon launch an anonymous messaging service to make it easier for athletes to provide information.

The 40 new officials hired by RUSADA to test athletes have been trained to resist pressure to bend the rules or the urge to be star-struck in the presence of national sports heroes. The aim is to ensure testing remains rigorous, with no special measures for big names.

Margarita Pakhnotskaya, who oversees RUSADA's education programs and liaises with WADA, said the aim to create "a new mentality ... allowing (testers) not just to avoid being scared to act in a certain way, but to train their communication skills, so that they feel calm and confident with any athlete, however great or well-known."

Despite Chirkina and Pakhnotskaya's enthusiasm, many details of exactly how the new RUSADA will function are unclear. Full reinstatement from WADA is also in the balance after WADA insisted the Russian Sports Ministry would have to admit complicity in past coverups.

Chirkina refused to say how many doping samples will be collected in Russia this year, saying only that it will be more than last year but still well below the 12,500 collected by RUSADA in 2014, when many positive tests were allegedly being buried.

"It will increase each year," she said.

It's also unclear when a new permanent CEO will be appointed, the first since December 2015, though Chirkina said it will be soon.

Even if RUSADA is reinstated, Russia has battles to fight on other fronts. Moscow's drug-testing laboratory – a separate organization from RUSADA – is far from ready to be reinstated after its former director said he covered up doping by Russian stars over several years. That means RUSADA must still send samples abroad for testing.

Besides that, the International Olympic Committee has set up two commissions looking into past Russian doping, and the country's participation in next year's Winter Olympics is not yet confirmed. 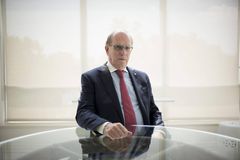 WADA restores some powers to Russian drug testing agency
June 27, 2017
Report an error
Due to technical reasons, we have temporarily removed commenting from our articles. We hope to have this fixed soon. Thank you for your patience. If you are looking to give feedback on our new site, please send it along to feedback@globeandmail.com. If you want to write a letter to the editor, please forward to letters@globeandmail.com.
Comments