Though little of real consequence can be taken from a baseball team's performance in spring training, it is a time to set the themes for the coming year. In a best-case scenario, you get some sense of all the good things that might happen and build some anticipation.

With a week remaining until opening day, the Toronto Blue Jays have managed that much. Unfortunately, the season they've got people amped up for is two, three or possibly an infinite number of years from now.

All the positive vibes down in Dunedin, Fla., are emanating from a pair of functional high schoolers – Vlad Guerrero Jr. (19) and Bo Bichette (20). By all accounts, they're the real thing.

But neither has played at any level higher than Class A. Realistically, they will not be major-league regulars until at least 2020. If they are to become the all-star-calibre players the organization hopes, that won't happen until a few years later, or maybe never. Baseball is funny that way.

To take the standout example from the current roster, Josh Donaldson didn't make his debut at the highest level until he was 24. He didn't play a full season until he was 27.

Donaldson was a late bloomer, but you can't argue with the results of a little patience in his case.

So no wonder pitcher Marcus Stroman was out in front calling Guerrero and Bichette "legends" and letting management know that he's decided they should already be on the team.

On a contending team, you wouldn't hear so much about players of Bichette's and Guerrero's ages. Like Gleyber Torres in New York or Victor Robles in Washington, their stories would be buried under all the talent at the top. The present would overshadow the future.

The Jays no longer have that luxury. They are a rebuilding team without the benefit of an actual rebuild. As such, they have nothing else to talk about.

In fact, talking routinely puts them in a terrible spot, because they have no good answers for what's going on. It's a lot of 'We'll see!,' said with a slightly hysteric edge.

Even by the organization's low standard in this regard, it's been a dull spring full of the usual stuff.

Donaldson is probably hurt already. Troy Tulowitzki may have to go full Six Million Dollar Man in order to be able to play baseball again. Stroman is irritated by something.

The most notable thing we've learned about this team thus far is that closer Roberto Osuna of Mexico considers his jailed Sinaloan neighbour Joaquin (El Chapo) Guzman a "hero."

"People where I live love that guy," Osuna told the Toronto Star. "We all love that guy because he was a really kind person to us."

I'm going to assume here that no one Osuna knows personally has had their head chopped off and rolled into a bar recently, and that "kind" is not being used in the Christian sense.

Getting down on one knee and reading a love sonnet to the head of a drug cartel may not be the smartest thing a baseball player has ever done, but it was at least interesting. On this team, that's a getting-a-man-to-the-moon level achievement.

Generally speaking, clubs generate most of their spring-training buzz from the appearance of new faces. There are plenty of those, though you'd be hard-pressed to tell one from the other.

Curtis Granderson seems like a wonderful person, but he is older than the hills. One supposes the purpose of bringing him in was, in large part, to provide a veteran example of how to play the game right. One fears that skill may be surplus to needs by August or so, when this team has stopped caring about the little things and is solely focused on getting to an airport every three or four days.

Randal Grichuk is an appealing presence, but he's spent most of the spring shuffling from the parking lot to a treatment table and back. He's already feeling like a player whose headshot you'd see if you looked up 'day-to-day' in the dictionary.

Aledmys Diaz was brought in to be Tulowitzki's backup, which is Canadian for 'everyday shortstop.' I'm not sure whether that makes him lucky or unlucky.

Elsewhere, Kendrys Morales is skinny-ish, Devon Travis has gone a month without any of his joints exploding, J.A. Happ is currently the de facto ace and a bunch of guys you've never heard of are in the bullpen.

If anything's really changed, it's that this team is a bit more pleasant and a bit less able.

After three fun years near the top, the Jays are returning to their traditional mean – a team that might be in the running for a wild-card spot if Jupiter finds itself at the zenith of Mars's orbit or somesuch, but, you know, not in the real world. It'll take them three months to admit it to themselves and another couple to let the rest of us know.

The customers – it's the preferred local term now that 'fan' has gone out of fashion – have noticed.

A week away, opening day – against the sexiest team in baseball right now, the Yankees – was not sold out. According to team president Mark Shapiro, season-ticket sales have gone off a cliff (not his precise wording). In a Q&A with Sportsnet, there was an odd digression about the scourge of scalpers.

In general, there is a lot of talk about stadium renovations, price points and user experience. There is rather less talk about baseball.

Last year, the hopefulness of the previous postseason gave the Jays just enough fuel to roll through an awful season. This year, the resignation of last September is baked in. No one is giving this club the benefit of the doubt any more. If the Jays don't storm through April, the upper deck of the Rogers Centre will be denuded of all human life by May. Then inertia takes hold and five third-place years slip by.

Shapiro & Co. have experienced fan apathy before. But they've never felt how crushing it can be in Toronto.

When that happens, and all the 'this year' talk turns into 'next year' promises, they're going to learn in a hurry. 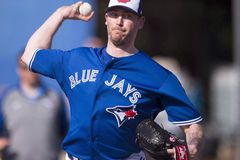 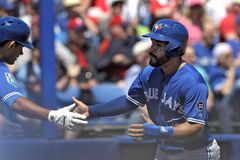 Blue Jays acquire right-hander Sam Gaviglo from Royals
March 21, 2018
Follow us on Twitter @globesports Opens in a new window
Report an error Editorial code of conduct
Due to technical reasons, we have temporarily removed commenting from our articles. We hope to have this fixed soon. Thank you for your patience. If you are looking to give feedback on our new site, please send it along to feedback@globeandmail.com. If you want to write a letter to the editor, please forward to letters@globeandmail.com.
Comments are closed