In place of on-field baseball action postponed by the COVID-19 pandemic, The Globe and Mail brings you a computer-simulated tournament involving four of the greatest Canadian teams, using the statistics-based software of the sports-game company Strat-O-Matic. Two first-round series eliminated the 1981 Montreal Expos and the 1985 Toronto Blue Jays, leaving the 1993 Jays and the ’94 Expos to compete for the mythical Macdonald-Cartier Cup.

With a lights-out closer and a batting order that included three future Hall of Famers, the 1993 Toronto Blue Jays could make a case for itself as one of the top baseball teams of the past 30 years. Then again, maybe the squad was only the second-best in its own country. A country with only two franchises.

The other team with elite bragging rights would be the 1994 Montreal Expos, the representation of an organization at its absolute peak. Five all-stars dotted the roster. Throw in a couple of Hall of Famers – a nascent Pedro Martinez and an in-his-prime Larry Walker – and what we had was a dominant team set for a glory run.

"Easiest baseball I’ve ever played,” Expos third baseman Sean Berry said in retrospect. “We could just play at a level that most teams couldn’t fathom to be at.”

The level was a .649 winning percentage. But what nobody could fathom was that a players’ strike would cut short the 1994 regular season and cause the cancellation of the postseason, denying the Expos of championship chances and locker-room celebrations. Champagne apparently stings the eyes, but nothing stings like denied opportunity.

Following the strike (which lasted into the 1995 season), Expos management sold off most of the team’s star players. Forecasting bankruptcy, principal owner Claude Brochu said he had no choice but to cut payroll. Not a “You had an option, sir” peep was heard from a former prime minister from Quebec.

And, so, the 1994 Expos are stuck in a what-might-have-been limbo, ghosts locked in the Montreal mausoleum called Olympic Stadium. Until now.

In the final round of The Globe and Mail’s virtual tournament, the ’94 Expos will face the ’93 Jays, a team led by a “Touch 'em all” Joe Carter and supported by a fat payroll that dwarfed the meagre Montreal budget. How would the teams have matched up on the field? Pretty closely.

“The talent and experience on the ’93 Blue Jays ball club was beyond real,” says Jerry Howarth, former long-time team radio broadcaster and author of the 2019 book Hello, Friends! Stories from My Life and Blue Jays Baseball. “That said, the Jays don’t win back-to-back World Series without catcher Pat Borders. He was so unselfish. Pat was behind the scenes, which is just the way he wanted it.”

The Expos of that same era were younger than the Jays, but no less confident. “Outfielder Marquis Grissom once told me that every day they went to the ballpark, they thought they would win,” says Danny Gallagher, author of six books on the Expos, including his latest, Always Remembered: New Revelations and Old Tales about those Fabulous Expos. “I like to call what they did ‘fire-wagon baseball,’ with their athleticism and putting runners in motion."

So, fire wagon versus fire power. Who wins?

At catcher, it’s a wash: The better bat of Montreal’s Darrin Fletcher is evened out by Borders’s defence and, I suppose, his Crash Davis-like intangibles.

First base: Due to a shoulder injury, the Expos’ Walker finished the season at first base. His 44 doubles and .322 batting average in 103 games tell us his bat was fine. For the Jays, John Olerud at the plate was basically a mild-mannered version of Ted Williams. Again, even.

Third base: Montreal’s Berry a bit better than Ed Sprague, although Toronto’s future Hall of Famer Paul Molitor will man the hot corner in the games played by National League rules in Olympic Stadium.

Shortstop: Yes, the Expos’ Will Cordero was an NL all-star, but Toronto’s Tony Fernandez (reacquired in a mid-season trade to replace the injured Dick Schofield) was consummate. Edge to Jays.

Designated hitter: Big edge for the Jays with Molitor.

Relievers: Big ol’ boys Duane Ward (Jays) and John Wetteland (Expos) grade out even, as does the rest of the bullpen for each side.

The verdict? Not much to choose from with these two teams. Let the computer simulation for Canadian hardball superiority begin.

Wednesday, The Globe will run a game report and box score of Game No. 1 of the final round of our computer-simulated tournament. Scheduled starters are Juan Guzman for the 1993 Toronto Blue Jays and Ken Hill for the 1994 Montreal Expos. 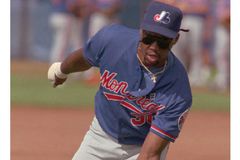 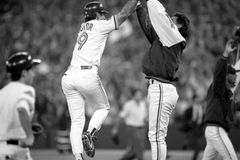