Back at the 2011 Rugby World Cup, just days before being put to the sword by the host and eventual champion New Zealand All Blacks, the Canadian squad earned a spirited 23-23 draw with Japan, the second tie game against its Asian rival in consecutive World Cups.

It’s tough to call Japan a rival any more. Since that meeting in New Zealand, Japan has gone from strength to strength, winning seven of its past nine World Cup games and reaching the quarter-finals as hosts last year, while Canada’s only positive World Cup result since was a draw with Namibia last October achieved on the strength of a typhoon-enforced cancellation. As a result, Japan currently sits eighth in the world rankings compiled by the sport’s governing body, World Rugby, while Canada, which was once as high as 11th after that 2011 tournament, is 23rd.

To say the future of Canadian men’s rugby union is hanging in the balance when the Toronto Arrows kick off their second season in Major League Rugby on Sunday might be overselling it a little, but not by much.

The 2003 creation of Japan’s Top League, a semi-professional competition, certainly helped in the country’s ascension in the sport, as did the 2016 launch of the Sunwolves, one of two Super Rugby franchises based outside of the sport’s hotbeds of South Africa, New Zealand and Australia.

But it was the Japan Rugby World Cup bid, which finally succeeded at the third attempt, that will likely have the longest-lasting effect. As a result of holding the World Cup, for instance, World Rugby’s Impact Beyond project has introduced 1.07 million Japanese to the sport since 2016.

It’s a story that Webb hopes to see unfold here, with World Rugby set to award the 2027 and 2031 tournaments at the end of next year.

“There’s a very high probability that North America is going to put in a bid, us and the United States … but the intention is to have a World Cup here. World Rugby I think would love that, they saw the success of Japan.

“If we’re awarded either of those, and the betting money is 2031 more likely, it will do for rugby what the 1994 [FIFA] World Cup did for soccer.”

In the meantime, the Arrows will be doing their bit to push the sport forward in this country when they kick off their 2020 season with a visit to Texas-based Austin Gilgronis. After reaching the semi-finals last year in their inaugural campaign, there is hope that the team, which kicked off just 77 days after being admitted to MLR in late 2018, can build on that success.

Certainly that is what Sam Malcolm, a New Zealand fly half who was the fourth-leading points scorer in the competition last year, is counting on after rejecting offers to go elsewhere.

“Though we made the semis, we still could have achieved a lot more,” he says. “It was one of the reasons why I decided to come back and play for a team that’s definitely achieving great things.”

When he’s not helping the Arrows bring home the championship trophy, Malcolm will be busy passing his love for the game to future generations by coaching some of the team’s academies this year.

But as far as growing the sport of rugby goes, there may well be another New Zealander attracting even more eyeballs in Toronto. Sonny Bill Williams won two Rugby World Cups as a member of the All Blacks, and even though he will be plying his trade as a member of the 13-man Toronto Wolfpack rugby league team this season, his fellow countryman feels it can only help the sport as a whole.

Don’t expect any such big-moneyed signings in MLR though. While Williams is on a reported two-year, $9-million deal, the MLR salary cap tops out at US$500,000 per team, with individual player salaries ranging from $12,500 to $45,000 per player, with squads of 35 players.

“It’s a salary-cap league, so none of these guys are driving around in Ferraris courtesy of us,” says Mark Winokur, vice-president and general manager of the Arrows.

What the Arrows are trying to do is provide a focal point and pathway for young rugby players, to show them how they can get from playing recreationally to ultimately playing for Canada at the World Cup.

“There just wasn’t a place for people to go if they wanted to be good at the sport,” Winokur says.

"It’s very similar to if you imagined in this country, no Toronto Maple Leafs. What would a kid in Toronto aspire to if there was no Leafs? If the highest thing he could do was the [AHL’s] Marlies or the [ECHL] Brampton Beast then it’s not that interesting.”

Of the 35-member first-team squad, 20 players – roughly 80 per cent – are Canadian for the 2020 season. And though the rules of the league permit 10 internationals, such as Malcolm, both Canadian and Americans count as domestic players. Still, the Arrows leadership group is heavily focused on Canadian content.

“We haven’t signed a single American and we haven’t wanted to,” Webb says. “We’ll take the best we can find in Canada … and we’ll sprinkle it with players from Uruguay, Argentina, New Zealand and Australia.”

As Winokur explains, one of the main missions of the Arrows is to eliminate the need for local players to take off for other parts of the world to play in second-tier leagues. If a player can find his way to a Super Rugby club or to a Premiership team in England, great, but the emergence of the Arrows presents another, local option.

A former player such as Aaron Carpenter, who represented Canada in three World Cups and earned 80 international caps, made a living playing for tier-two clubs in England such as Coventry and Doncaster and would have been a perfect fit for the Arrows, if they had existed at the time.

“It’s a vehicle that’s been needed for probably 15 years,” he says. “It took some time but now it’s finally in place so we can make things start to happen, and I’m really excited for our Year 2.”

Arguably no one is more excited that national team coach Kingsley Jones. The native Welshman took over in 2017, just in time to get Canada qualified for the 2019 Rugby World Cup, and presided over a hectic, compressed schedule.

Though the results didn’t go the way he would have wanted, now with some time to breathe he finally has some time to look to the sport’s future in this country. Having a professional team is a critical factor, Jones feels, to long-term success in the sport.

In addition, having grown up in a country where he says rugby was on free-to-air TV four or five days a week, exposure is equally important to getting people involved in the sport, so Jones also points to the team’s 2020 TV deal, in which TSN will show all the matches, as equally crucial.

“Put it this way,” he says. “It’s fairytale stuff to think that amateur rugby players can compete in a professional competition.” 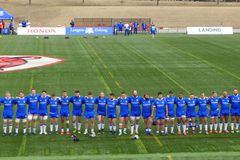 Toronto Arrows move up to third in the standings with late win over Utah Warriors
May 12, 2019