When the global track and field schedule shut down due to COVID-19, Justyn Knight went a year without a race.

But a student of his sport, he put the time to good use, studying the world’s top middle-distance runners during months of self-reflection in his quest to be the best.

What was evident among the best 5,000-metre runners were that they’re very fast over 1,500 as well. Medals often go to those with the best finishing kick, the fastest on the final lap.

Wanting to be in the mix at the Tokyo Olympics, the 24-year-old Knight put more emphasis on running a fast 1,500 – a move that has paid off.

At the Golden Gala last week in Florence, Italy, in his first 5,000 race since the 2019 world championships, Knight stuck close behind the leaders on a blistering last lap to shave a whopping 18 seconds off his personal best to finish fifth. He’s now the second fastest North American in history over the distance. Canadian teammate and friend Moh Ahmed, who won bronze in Florence, is No. 1.

“This whole entire year, everything that I’ve been doing, all the 1,500 metres I’ve been doing, is just prepare myself for that last lap to make sure that I had the speed,” Knight said from Charlottesville, Va., where he lives and trains.

“I’ve definitely shown that I’m able to be competitive. And I feel like at this level on the pro scene, if you’re not trying to win, then I don’t know what people are trying to do. That’s how I will be thinking from now on.”

Knight tweeted a picture of him and Ahmed, arms draped around shoulders, after the race, and wrote: “And we’re just getting started.”

With all his speed work at the shorter distance, Knight ran the automatic qualifying standard for Tokyo in the 1,500, and became the second-fastest Canadian at that distance ever.

He’s still undecided which distance he’ll run in Tokyo, he said. He briefly considered doing both. But he feels his body isn’t yet mature enough to run a tough double, with three rounds in Tokyo at each distance, and there’s a scheduling conflict that would make it virtually impossible.

Canada will pack a powerful 1-2 punch in the 5,000 in Tokyo if he chooses the longer distance.

The battle to compete in Tokyo has been fierce in Canada over numerous distances, on both the men’s and women’s sides.

At the Harry Jerome Track Classic on Saturday in Burnaby, B.C., Vancouver’s Luc Bruchet shaved 10 seconds off his personal best in the 5,000 to dip under the automatic Tokyo standard in the 5,000.

Knight and Ahmed have developed a great relationship the last few years, since Knight was a freshman at Syracuse and reached out to the 30-year-old Ahmed, the reigning world bronze medallist in the 5,000, on Facebook “like a stereotypical fan.”

“I thought, ‘Oh, I hope he replies.’ And he actually got back to me fairly quickly and was super nice,” Knight said. “He was always someone that I looked up to, and he’s been great for me, obviously he helps me out a lot, he’s been on the pro team at a high level for quite some time.

“For me, going to these Diamond League meets, or my first time at the world championships, I didn’t know what I was doing. I didn’t know what to expect. I didn’t know how to prepare for an event like that, and he always walked me through and make sure that I knew how to, I was doing everything to perform my best. I’ve always been like really grateful for our relationship. And outside of that, he’s a really funny guy too.”

While Knight moved to Charlottesville in 2018 to train at the Reebok team’s headquarters, he ran alone for the first eight months of the pandemic. His coach, Chris Fox, supervised his workouts.

“The virus was so serious, and I didn’t know the effects and how bad it was going to get and I just felt like only I can be responsible for my safety,” Knight said.

But he made the most of it. Never one to push the pace in workouts, Knight usually let teammates lead. He drew strength from running alone very day.

“There is a lot that I took out in 2020, life lessons, in general. One thing for sure was missing out on all these meets. I felt really grateful the first time that I ran a race, I was just so grateful to be there, heading into it I thought ‘I’m going to run as fast as I can, going to just try to make this happen, this is an opportunity that you didn’t have last year. Let’s go.”’ In last week’s Diamond League meet, Knight wasn’t aware just how fast he was running. He prefers to run based on feel rather than try to stick to splits.

“(Watching the clock) can be a blessing or a curse where I feel sometimes I might look up and be like, ‘Oh, my gosh, it’s so intimidating. I’ve never been here before,’ and I might psych myself out,” Knight said.

“When I crossed the line, I went straight to Moh, and told him congratulations. And then I was looking at the clock and saw everybody else ahead of me was fast. I was just waiting for my name and thinking ‘What did I run? What did I run?’ And then I saw 12:51, was just so happy to see the result.”

If only his favourite Toronto sports teams produced similar results this season. Knight attended the Toronto Raptors championship parade in 2019, squeezing in near the stage at Nathan Phillips Square. Like other Maple Leafs fans, he was stung by their recent Game 7 first-round playoff exit, a series they’d been leading 3-1.

“They always break my heart. I’ll never forget, I was in high school during the (2013) series against Boston,” Knight said – the Leafs gave a 4-1 third-period lead to lose Game 7. “Boston came back and beat us, and I was like crying.”

Because of Canada’s quarantine rules, and with his spot virtually locked up, Knight won’t race at the Olympic trials in two weeks in Montreal. 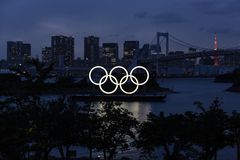 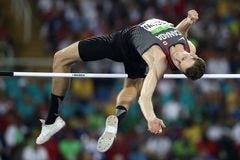